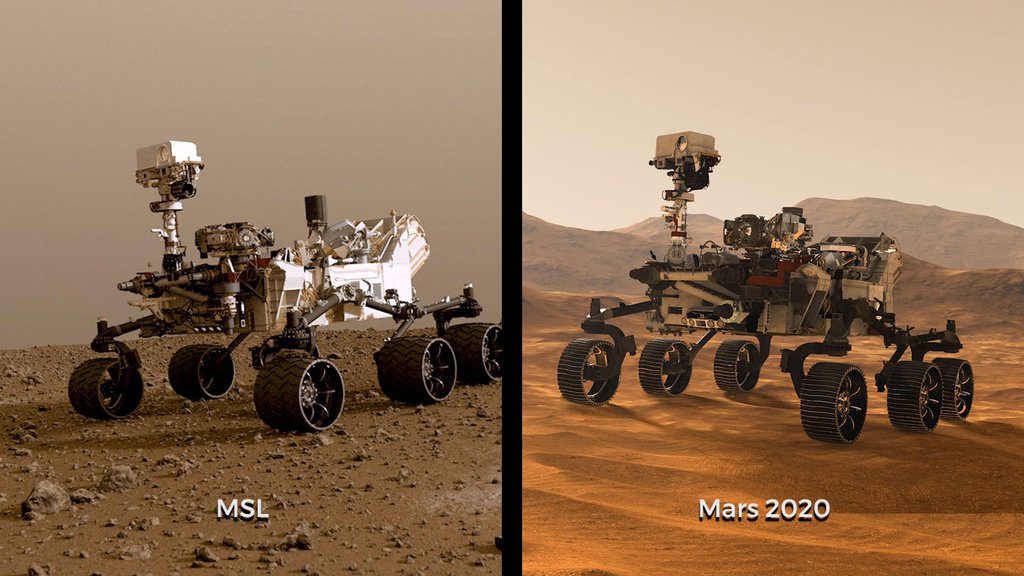 Illustrations of NASA's Curiosity and Mars 2020 rovers. While the newest rover borrows from Curiosity's design, each has its own role in the ongoing exploration of Mars and the search for ancient life.› Full image and caption
Credit: NASA/JPL-Caltech 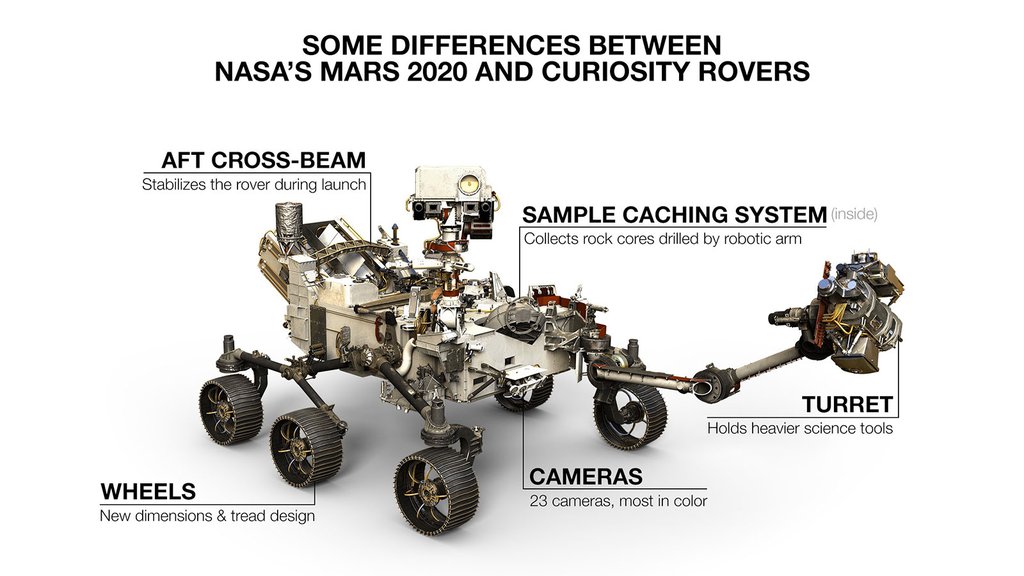 NASA's Mars 2020 rover looks virtually the same as Curiosity, but there are a number of differences. One giveaway to which rover you're looking at is 2020's aft cross-beam, which looks a bit like a shopping cart handle.› Full image and caption
Credit: NASA/JPL-Caltech

They look like twins. But under the hood, the rover currently exploring the Red Planet and the one launching there this summer have distinct science tools and roles to play.

Curiosity won't be NASA's only active Mars rover for much longer. Next summer, Mars 2020 will be headed for the Red Planet. While the newest rover borrows from Curiosity's design, they aren't twins: Built and managed by NASA's Jet Propulsion Laboratory in Pasadena, California, each has its own role in the ongoing exploration of Mars and the search for ancient life. Here's a closer look at what sets the siblings apart.

Landing in 2004 to "follow the water," the twin rovers Spirit and Opportunity discovered evidence that the planet once hosted running water before becoming a frozen desert. But when did this happen and why?

NASA launched the supersized Curiosity rover to learn more. Since landing in 2012, Curiosity has been roaming Gale Crater, which, it discovered, contained a lake billions of years ago and an environment that could have supported microbial life. The rover is still hunting for clues related to this environment as it ascends the 3-mile-tall (5-kilometer-tall) Mount Sharp, which sits within Gale Crater and was partially formed by water.

Some 2,300 miles (3,700 kilometers) away, Mars 2020 will also explore a landscape shaped by water: Jezero Crater, the site of an ancient delta. But 2020 will take the next scientific step: It will look for actual signs of past life, or biosignatures, capturing samples of rocks and soil that could be retrieved by future missions and returned to Earth for in-depth study.

Mars 2020's chassis, or body, is about five inches longer than Curiosity's. It's also heavier, checking in at 2,260 pounds (1,025 kilograms), compared with Curiosity's 1,982 pounds (899 kilograms). The weight difference has to do with the tools each carries.

Start with the robotic arms: Curiosity's extends 7 feet (2.2 meters) and wields a rotating 65-pound (30-kilogram) turret equipped with a scientific camera, chemical analyzer and drill. The roving science lab pulverizes rock samples and pours the powder into its chassis, where two laboratories can determine the rocks' chemical and mineral makeup.

Mars 2020's arm has the same reach as Curiosity's, but its turret weighs more - 99 pounds (45 kilograms) - because it carries larger instruments and a larger drill for coring. The drill will cut intact rock cores, rather than pulverizing them, and they'll be placed in sample tubes via a complex storage system.

The Eyes and Ears

All of NASA's Mars missions have allowed the public to ride along as scientists and engineers explore the planet. Curiosity has been doing that with 17 cameras on its Mast, or head, and body; four of them are color cameras.

Mars 2020 has 23 cameras, most of them color. The new rover also includes "ears" - two microphones to capture not only the first sounds of a Mars landing, but also Martian wind and the rover's chemical-analyzing laser zaps. Mastcam-Z, an improved version of Curiosity's Mast Camera, has a zoom capability and will take high-definition video and panoramas.

Curiosity has prepared Mars 2020's team for "off-roading" on the Red Planet. When holes began appearing in the veteran rover's aluminum wheels, engineers realized that sharp rocks cemented on the Martian surface exert more pressure on the wheels than expected. Careful drive planning, along with a software upgrade, will keep them in shape for the rest of Curiosity's journey up Mount Sharp.

While Mars 2020's wheels are made from the same materials, they're slightly bigger and narrower, with skins that are almost a millimeter thicker. Instead of Curiosity's chevron-pattern treads, or grousers, Mars 2020 has straighter ones and twice as many per wheel (48 versus 24). Extensive testing in JPL's Mars Yard has shown these treads better withstand the pressure from sharp rocks but work just as well on sand.

Mars rovers don't drive themselves. Teams of scientists and engineers beam meticulously programmed task lists to them at the beginning of each Mars day, or sol. Rover drivers on Earth then wait for the vehicle to report back before planning the next drive. The more a rover can do on its own, the more time drivers have to program new commands.

After Curiosity landed, it took an average of 19 hours for the rover's team to analyze a day's data, build and test commands, then send those commands back to the rover. Years of honing operations shrunk the time it takes to develop each day's plan to seven hours, and a limited degree of auto-navigation has enabled Curiosity to take some cautious steps on its own.

But Mars 2020 has even more self-driving smarts, allowing it to calculate a path five times faster than Curiosity can. That self-driving will be key to condensing the amount of time it takes for the 2020 team to plan each day's operations. The new mission intends to eventually condense daily operations to just five hours. The faster pace will allow it to cover more ground and gather more samples over the course of its prime mission. Mars 2020 won't move faster than its older sibling, but more automation means that it can potentially drive farther and collect more science without having to wait for engineers back on Earth.

Curiosity transformed Mars landings with the seemingly radical "sky crane maneuver." Mars 2020 will rely on the same process but also features an important new technology: Terrain Relative Navigation. An onboard computer matches surface images from a camera to a map to keep the spacecraft on target. Meanwhile, the Range Trigger lets the rover get miles closer to an ideal site before firing a parachute.

The Humans to Come

NASA's Artemis program aims to return astronauts to the Moon by 2024, preparing for future exploration of Mars. Helping pave the way for humans, Curiosity carries instruments that study the Martian environment, like surface radiation and weather.

Besides studying the weather, Mars 2020 will carry spacesuit samples, allowing scientists to study how they degrade. An oxygen generator will test technology for astronauts to make their own rocket fuel from the Martian atmosphere. A subsurface radar like the one on the rover could someday be used to find buried water ice.

For more information about Curiosity and Mars 2020, visit: