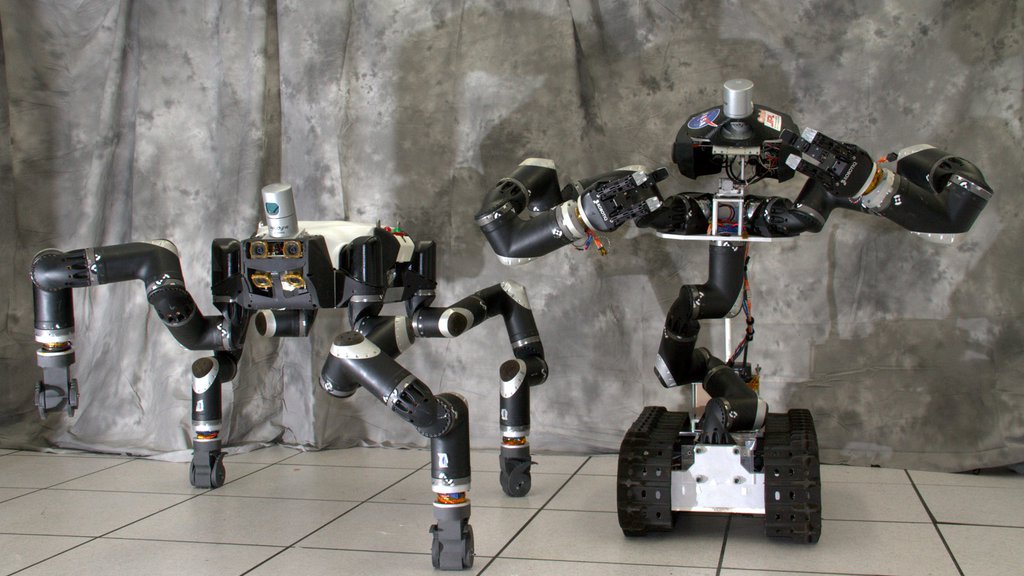 RoboSimian and Surrogate are robots that were designed and built at NASA's Jet Propulsion Laboratory in Pasadena, California. RoboSimian will compete in the 2015 DARPA Robotics Challenge Finals.
Credit: JPL-Caltech 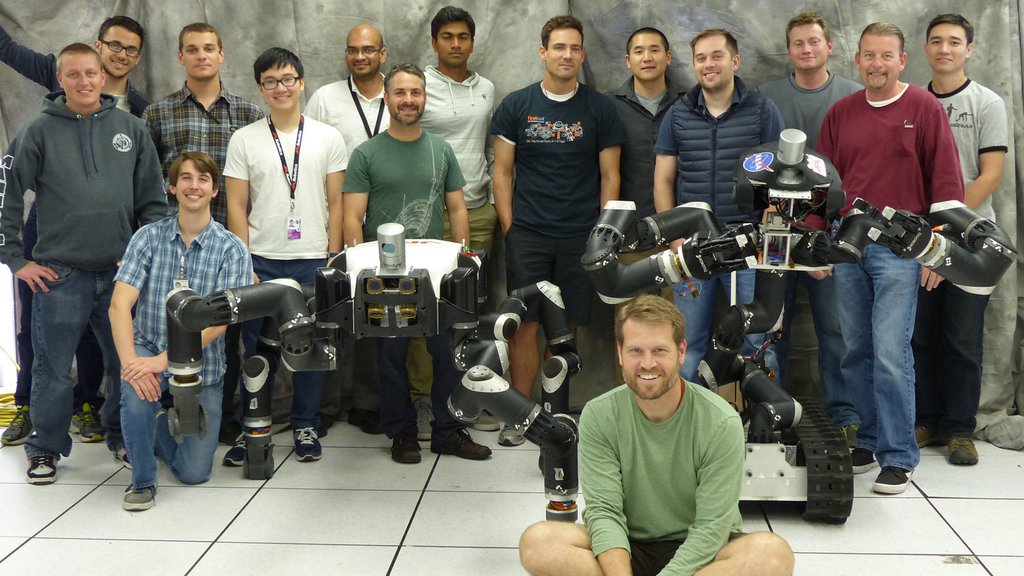 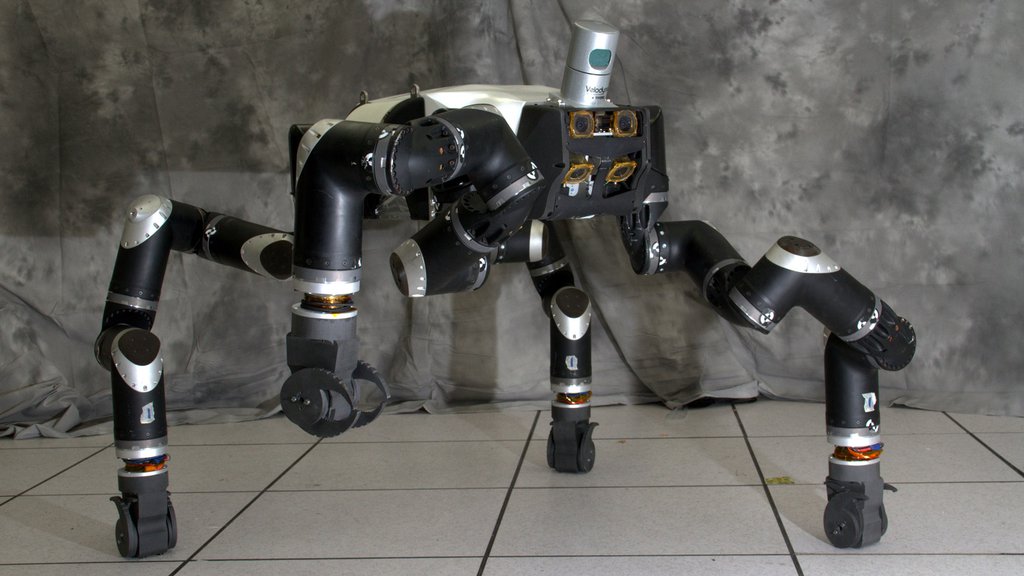 RoboSimian is an ape-like robot that moves around on four limbs. It was designed and built at NASA's Jet Propulsion Laboratory in Pasadena, California.
Credit: JPL-Caltech 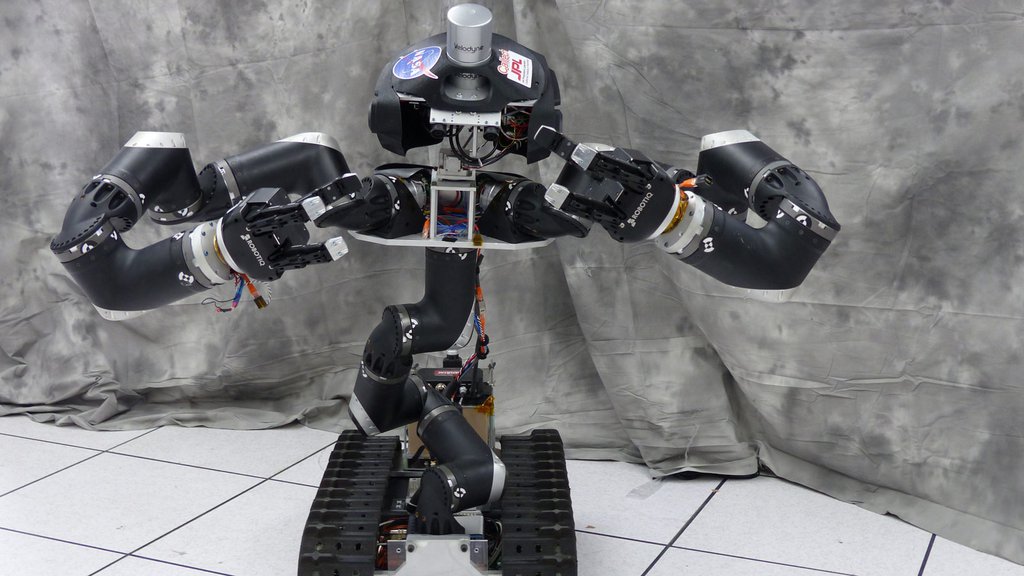 To the theme song of "2001: A Space Odyssey," a robot with a twisty spine rolled toward Thomas Rosenbaum, the new president of the California Institute of Technology, on Oct. 24, as he stood on a stage at NASA's Jet Propulsion Laboratory in Pasadena, California.

This robot, called Surrogate, or "Surge" for short, was strutting its moves at a ceremony honoring Rosenbaum, who was being inaugurated the same day at Caltech. Surrogate delivered a digital tablet to Rosenbaum, which he used to push a button that initiated commands for NASA's Mars rover Curiosity.

The scene for Surrogate's job that day was calm compared with other situations that a robot of this kind might one day encounter.

"Surge and its predecessor, RoboSimian, were designed to extend humanity's reach, going into dangerous places such as a nuclear power plant during a disaster scenario such as we saw at Fukushima. They could take simple actions such as turning valves or flipping switches to stabilize the situation or mitigate further damage," said Brett Kennedy, principal investigator for the robots at JPL.

RoboSimian was originally created for the DARPA Robotics Challenge, a competition consisting of several disaster-related tasks for robots to perform. In the trials round last December, the JPL team won a spot to compete in the finals, which will be held in Pomona, California, in June 2015.

Using extra limbs from RoboSimian, Kennedy and colleagues constructed Surrogate at the beginning of 2014. Over the past six months, they have been testing both robots to see which one should compete in the finals.

Finally, they have decided: RoboSimian will represent the team in Pomona.

"It comes down to the fact that Surrogate is a better manipulation platform and faster on benign surfaces, but RoboSimian is an all-around solution, and we expect that the all-around solution is going to be more competitive in this case," Kennedy said.

Surrogate was designed more like a human -- with an upright spine, two arms and a head, standing about 4.5 feet (1.4 meters) tall and weighing about 200 pounds (90.7 kilograms). Its strength is in handling objects, and its flexible spine allows for extra manipulation capabilities. But the robot moves on tracks, which doesn't allow it to move over tall objects. A flight of stairs or a ladder would be problematic for Surrogate, for instance.

RoboSimian is more ape-like, moving around on four limbs. It is better suited to travel over complicated terrain, including true climbing. In addition, Surrogate has only one set of "eyes" -- two cameras that allow for stereo vision -- mounted to its head. RoboSimian lacks a head but has up to seven sets of eyes, so it can see from its front, "stomach" and sides as well.

The little hat-like appendage on top of Surrogate is called a LiDAR (Light Detection and Ranging). This device spins and shoots out laser beams in a 360-degree field to map the surrounding environment in 3-D. JPL researchers plan to put a LiDAR on top of RoboSimian as well.

The robots run almost identical computer code, and the software that plans their motions is very similar. As in a video game, each robot has an "inventory" of objects with which it can interact. Engineers have to program the robots to recognize these objects and perform pre-set actions on them, such as turning a valve or climbing over blocks.

The RoboSimian team at JPL is collaborating with partners at the University of California, Santa Barbara, and Caltech to get the robot to walk more quickly.

Although both robots are impressive to observe, Kennedy does not envision that either prototype would be a companion that could bring you the TV remote or cook you scrambled eggs, for example.

"These robots were specifically developed to go where humans could not, so we have not addressed the many technical and safety issues that come with working side-by-side with people," Kennedy said.

The team is prepping RoboSimian to face the challenges of the DARPA Robotics Challenge Finals. Specifically, the robot will be faced with such tasks as driving a vehicle and getting out of it, negotiating debris blocking a doorway, cutting a hole in a wall, opening a valve and crossing a field with cinderblocks or other debris. There will also be a surprise task.

Although RoboSimian is now the focus of Kennedy's team, Surrogate won't be forgotten.

"We'll continue to use it as an example of how we can take RoboSimian limbs and reconfigure them into other platforms," Kennedy said.

For details about the DARPA Robotics Challenge, visit: