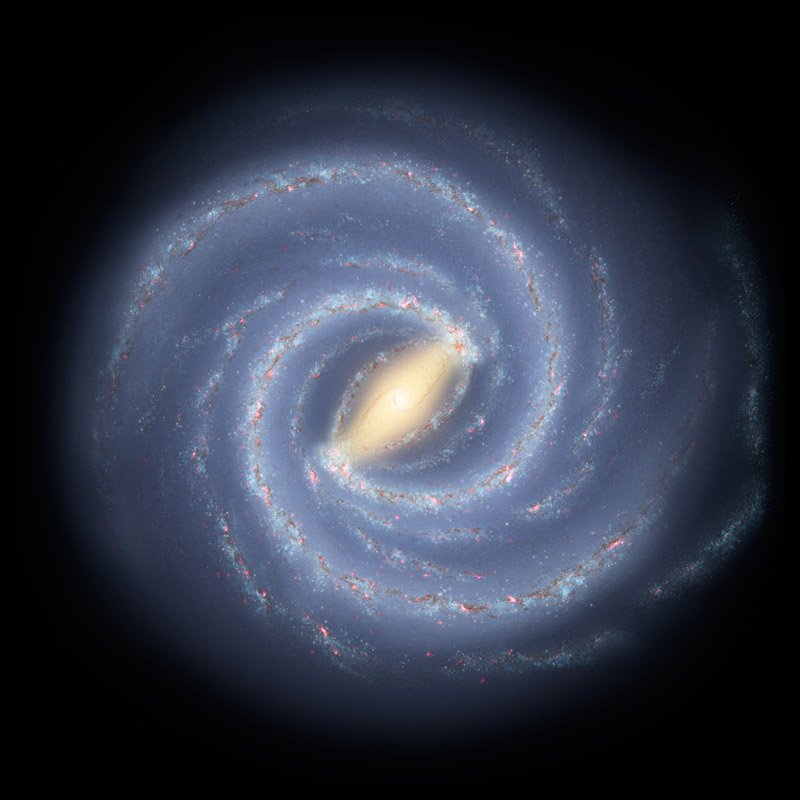 Using infrared images from NASA's Spitzer Space Telescope, scientists have discovered that the Milky Way's elegant spiral structure is dominated by just two arms wrapping off the ends of a central bar of stars. Previously, our galaxy was thought to possess four major arms.› Full image and caption
Credit: NASA/JPL-Caltech

New images from NASA's Spitzer Space Telescope are shedding light on the true structure of the Milky Way, revealing that it has just two major arms of stars instead of the four it was previously thought to possess.

St. Louis, Mo. -- For decades, astronomers have been blind to what our galaxy, the Milky Way, really looks like. After all, we sit in the midst of it and can't step outside for a bird's eye view.

Now, new images from NASA's Spitzer Space Telescope are shedding light on the true structure of the Milky Way, revealing that it has just two major arms of stars instead of the four it was previously thought to possess.

"Spitzer has provided us with a starting point for rethinking the structure of the Milky Way," said Robert Benjamin of the University of Wisconsin, Whitewater, who presented the new results at a press conference today at the 212th meeting of the American Astronomical Society in St. Louis, Mo. "We will keep revising our picture in the same way that early explorers sailing around the globe had to keep revising their maps."

An artist's concept of the structure of our two-armed Milky Way is online at http://www.nasa.gov/mission_pages/spitzer/multimedia/20080603a.html .

Since the 1950s, astronomers have produced maps of the Milky Way. The early models were based on radio observations of gas in the galaxy, and suggested a spiral structure with four major star-forming arms, called Norma, Scutum-Centaurus, Sagittarius and Perseus. In addition to arms, there are bands of gas and dust in the central part of the galaxy. Our sun lies near a small, partial arm called the Orion Arm, or Orion Spur, located between the Sagittarius and Perseus arms.

"For years, people created maps of the whole galaxy based on studying just one section of it, or using only one method," said Benjamin. "Unfortunately, when the models from various groups were compared, they didn't always agree. It's a bit like studying an elephant blind-folded."

Large infrared sky surveys in the 1990s led to some major revisions of these models, including the discovery of a large bar of stars in the middle of the Milky Way. Infrared light can penetrate through dust, so telescopes designed to pick up infrared light get better views of our dusty and crowded galactic center. In 2005, Benjamin and his colleagues used Spitzer's infrared detectors to obtain detailed information about our galaxy's bar, and found that it extends farther out from the center of the galaxy than previously thought.

The team of scientists now has new infrared imagery from Spitzer of an expansive swath of the Milky Way, stretching 130 degrees across the sky and one degree above and below the galaxy's mid-plane. This extensive mosaic combines 800,000 snapshots and includes over 110 million stars.

Benjamin developed software that counts the stars, measuring stellar densities. When he and his teammates counted stars in the direction of the Scutum-Centaurus Arm, they noticed an increase in their numbers, as would be expected for a spiral arm. But, when they looked in the direction where they expected to see the Sagittarius and Norma arms, there was no jump in the number of stars. The fourth arm, Perseus, wraps around the outer portion of our galaxy and cannot be seen in the new Spitzer images.

The findings make the case that the Milky Way has two major spiral arms, a common structure for galaxies with bars. These major arms, the Scutum-Centaurus and Perseus arms, have the greatest densities of both young, bright stars, and older, so-called red-giant stars. The two minor arms, Sagittarius and Norma, are filled with gas and pockets of young stars. Benjamin said the two major arms seem to connect up nicely with the near and far ends of the galaxy's central bar.

Though galaxy arms appear to be intact features, stars are actually constantly moving in and out of them as they orbit the center of the Milky Way, like London commuters in a busy traffic circle. Our own sun might have once resided in a different arm. Since it was formed more than 4 billion years ago, it has traveled around the galaxy 16 times.