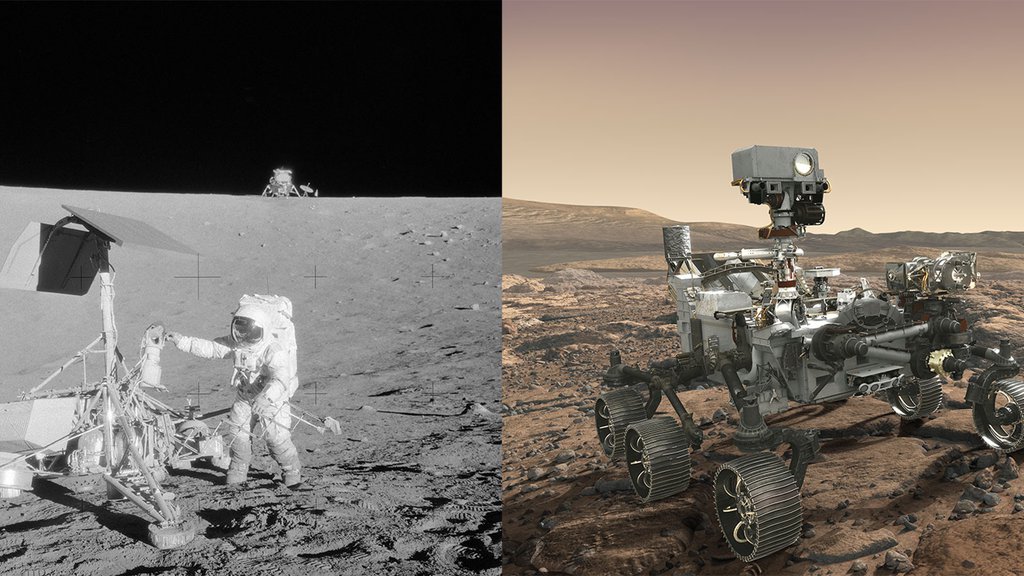 (Left) Apollo 12 astronaut Charles "Pete" Conrad Jr. stands beside NASA's Surveyor 3 spacecraft; the lunar module Intrepid can be seen in the distance. Apollo 12 landed on the Moon's Ocean of Storms on Nov. 20, 1969. (Right) Mars 2020 rover, seen here in an artist's concept, will make history's most accurate landing on a planetary body when it lands at Mars' Jezero Crater on Feb. 18, 2021.› Full image and caption
Credit: NASA/JPL-Caltech 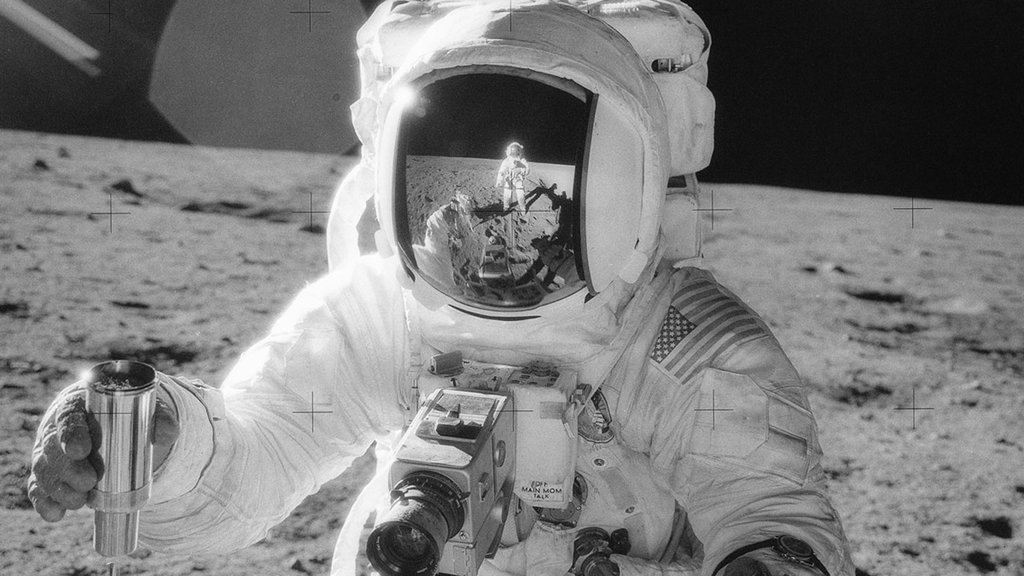 Apollo 12 lunar module pilot Alan Bean holds a container of lunar soil, with the reflection of mission commander Charles "Pete" Conrad Jr. visible on his visor. The image was taken on the Moon's Ocean of Storms on Nov. 20, 1969. Apollo 12's lunar activities included the deployment of the Apollo Lunar Surface Experiments Package (ALSEP), finding NASA's Surveyor 3 spacecraft (which landed on the Moon on April 19, 1967), and collecting 75 pounds (34 kilograms) of rock samples.
Credit: NASA 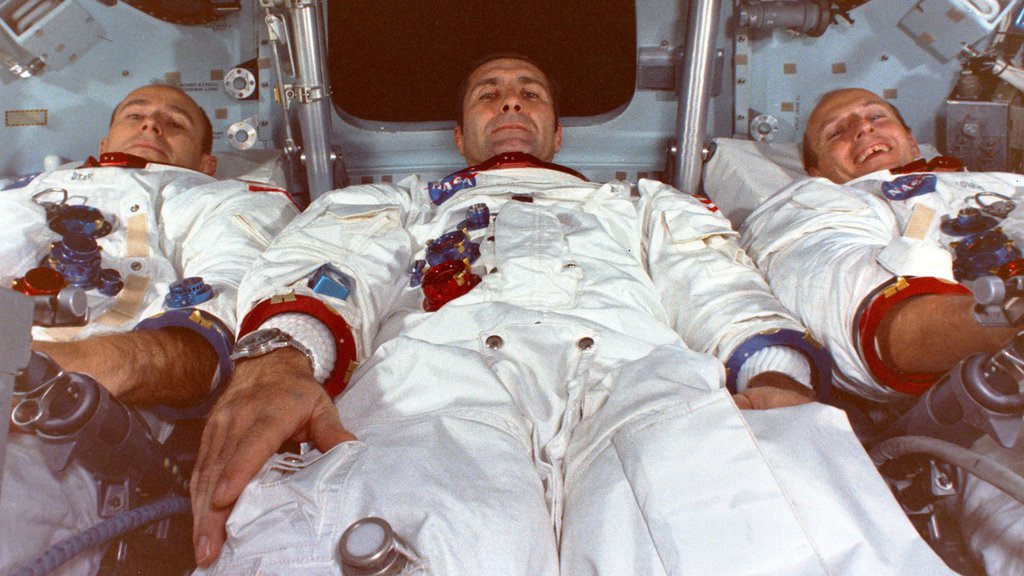 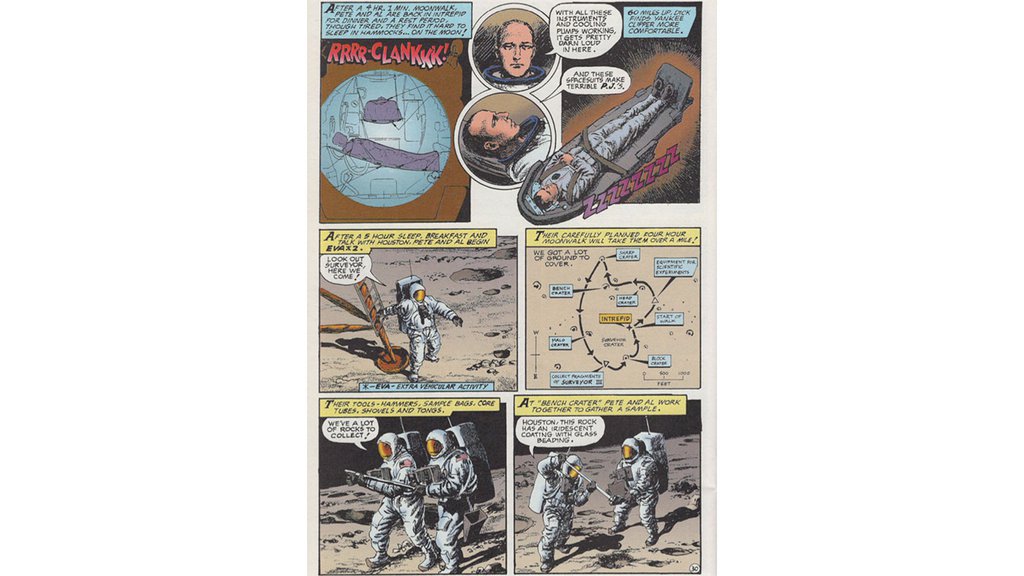 A graphic novel chronicling the historic flight of Apollo 12 is available for download from NASA .here
Credit: NASA/PPG

Apollo 12 and the upcoming Mars 2020 mission may be separated by half a century, but they share several goals unique in the annals of space exploration.

Fifty years ago today, during their second moonwalk, Charles "Pete" Conrad Jr. and Alan Bean became the first humans to reach out and touch a spacecraft that had previously landed on another celestial body. NASA's 1969 Apollo 12 Moon mission and the upcoming Mars 2020 mission to the Red Planet may be separated by half a century and targets that are 100 million miles apart, but they share several mission goals unique in the annals of space exploration.

"We on the Mars 2020 project feel a special kinship with the crew of Apollo 12," said John McNamee, Mars 2020 project manager at NASA's Jet Propulsion Laboratory in Pasadena, California. "They achieved the first precision landing, deployed the most advanced suite of science instruments of the time, and were the first to interact with another spacecraft that put down on another world. That's all part of the Mars 2020 playbook as well."

NASA needed Apollo 12 to prove a precision landing was possible because future Apollo missions would target locations in the lunar highlands, where mountains, massive craters, boulder fields and rilles could ruin their day if the lunar modules strayed from their prescribed landing path. And while the previous mission, Apollo 11, was a monumental success, it overshot its intended landing site in the Sea of Tranquility by about 4 miles (6 kilometers).

To demonstrate a precision landing, Apollo 12 mission planners could have chosen just about anywhere on the nearside of the Moon by targeting any of literally millions of known geologic features. In the end, they chose for Pete and Al a relatively nondescript crater in the Ocean of Storms because JPL had plunked down a spacecraft there two-and-a-half years earlier.

"When Pete and Al put the lunar module Intrepid down within about 520 feet [160 meters] of Surveyor 3, it gave NASA the confidence to later send Apollo 15 to Hadley Rille, Apollo 16 to go to the Descartes Highlands and Apollo 17 to land at Taurus Littrow," said McNamee. "We also have to be precise with our landing on Mars - not only to pave the way for future precision landings on the Red Planet for both robotic and human-crewed missions, but also because Mars 2020's scientifically appealing landing site at Jezero Crater has all sorts of cliffsides, sand dunes, boulders and craters that can adversely affect us during landing."

Mars 2020 will be history's first planetary mission to include terrain relative navigation, a computerized autopilot that utilizes optical imagers and computers to help Mars 2020 avoid landing hazards and make the most accurate landing on a planetary body in history.

There are other similarities. During their first moonwalk, Conrad and Bean deployed the Apollo Lunar Surface Experiments package (ALSEP). Powered by a radioisotope thermoelectric generator, the five science instruments (seismometer, atmospheric sensor, solar wind spectrometer, lunar dust collector and magnetic field sensor) were the most advanced ever to be carried to another celestial body, and they sent back groundbreaking data on the lunar environment from November 1969 to September 1977. When Mars 2020 alights at Jezero Crater, it also will be equipped with the most advanced science instruments ever to travel to another world.

"The science instruments we carry benefit not only from advances in technology, but the hard lessons learned by those missions of exploration, including Apollo, that preceded us," said Ken Farley, project scientist for Mars 2020 from Caltech in Pasadena. "Our seven state-of-the-art science tools will help us acquire the most information possible about Martian geology, atmosphere, environmental conditions, and potential biosignatures, giving us insight into the Red Planet like never before."

During their second moonwalk, Conrad and Bean reached the Surveyor 3 lander - one of the robotic missions that explored the Moon in advance of astronauts. They not only collected images and samples of the lunar surface surrounding the spacecraft, but cut, sawed and hacked parts off the three-legged spacecraft, including Surveyor's TV camera and its surface-soil sampling scoop.

"NASA wanted to see what happened to materials that were exposed to the lunar environment for an extended period," said McNamee. "To this day, the samples of Surveyor 3, which endured 31 months at the Ocean of Storms, are our best and only demonstrations of the natural processes that can affect spacecraft components left on the Moon."

One of Mars 2020's major mission goals is to seek signs of past microscopic life, collecting the most compelling rock core and Martian dust samples. Subsequent missions, currently under consideration by NASA, would send spacecraft to Mars to collect these samples from the surface and return them to Earth for in-depth analysis. To help engineers design spacesuits to shield astronauts from the elements, NASA is sending five samples of spacesuit material along with one of Mars 2020's science instruments, called Scanning Habitable Environments with Raman & Luminescence for Organics & Chemicals (SHERLOC). A piece of an astronaut's helmet and four kinds of fabric are mounted on the calibration target for this instrument. Scientists will use SHERLOC, as well as a camera that photographs visible light, to study how the materials degrade in ultraviolet radiation. It will mark the first time spacesuit material has been sent to Mars for testing and will provide a vital comparison for ongoing testing at NASA's Johnson Space Center.

Just as NASA's Surveyor missions helped blaze a trail for Neil and Buzz on Apollo 11, Pete and Al on 12, as well as Al and Ed (Apollo 14), Dave and Jim (Apollo 15), John and Charlie (Apollo 16), and Gene and Harrison (Apollo 17), Mars 2020 is helping set the tone for future crewed missions to Mars.

Mars 2020's landing system includes a suite of sensors that will document the descent to the surface in never-seen-before detail so that future robotic and crewed missions factor those details into their landings. When on the surface, the rover's MOXIE instrument is designed to demonstrate that converting Martian carbon dioxide to pure oxygen is possible, and RIMFAX could teach us how to use ground-penetrating radar so that future missions can use it to find sources of fresh water.