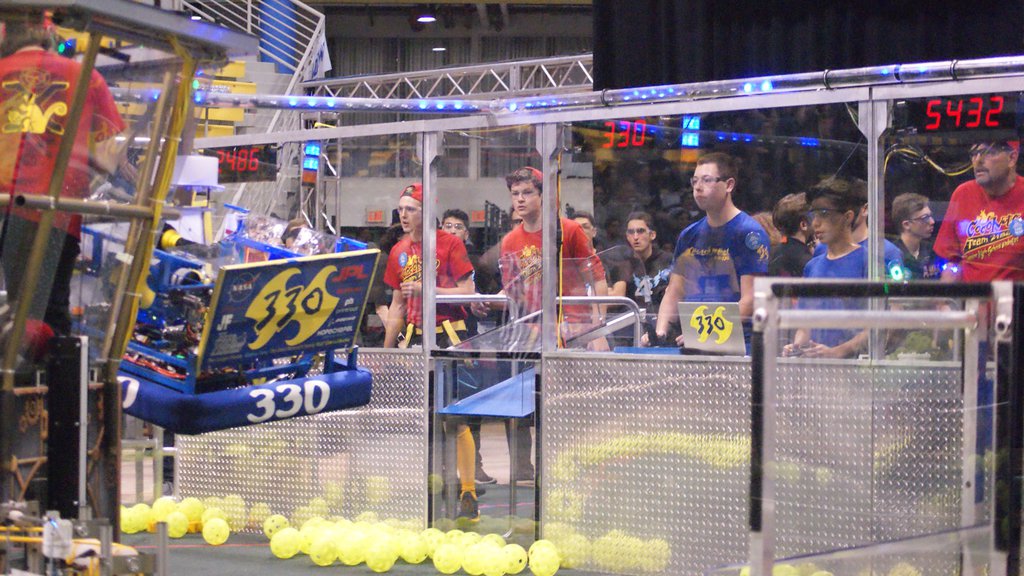 Zach Couch (left) and Joel Borja (right) of Team 330, a JPL-sponsored robotics team, drive the Beach Bot during the FIRST Robotics Los Angeles regional competition. Here, the robot can be seen lifting itself up on a rope attached to the platform.
Credit: NASA/JPL-Caltech 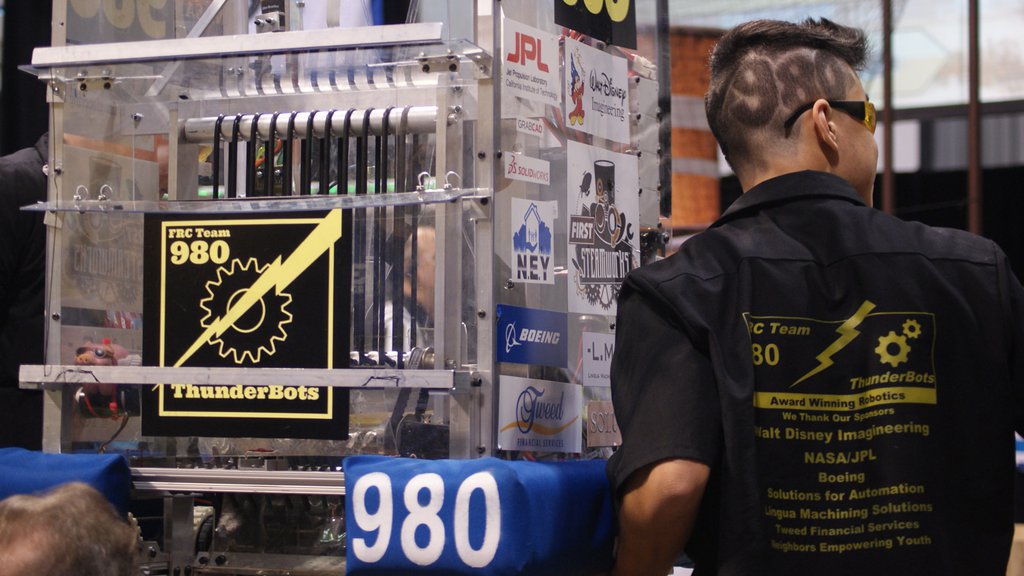 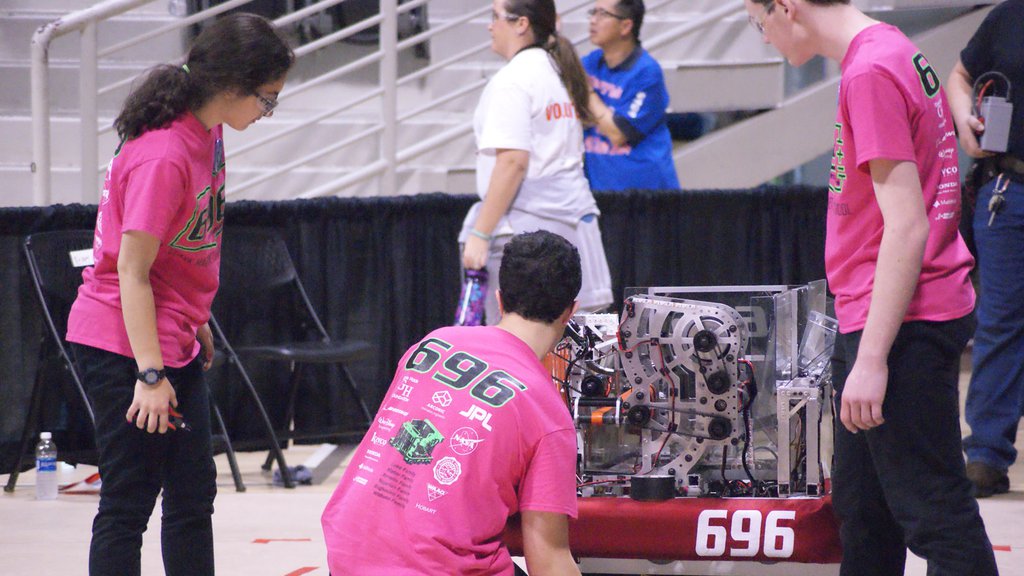 Members of Team 696 repair a radio that was knocked off their robot in a collision. Teams have to work fast during downtime to make changes and repairs.
Credit: NASA/JPL-Caltech 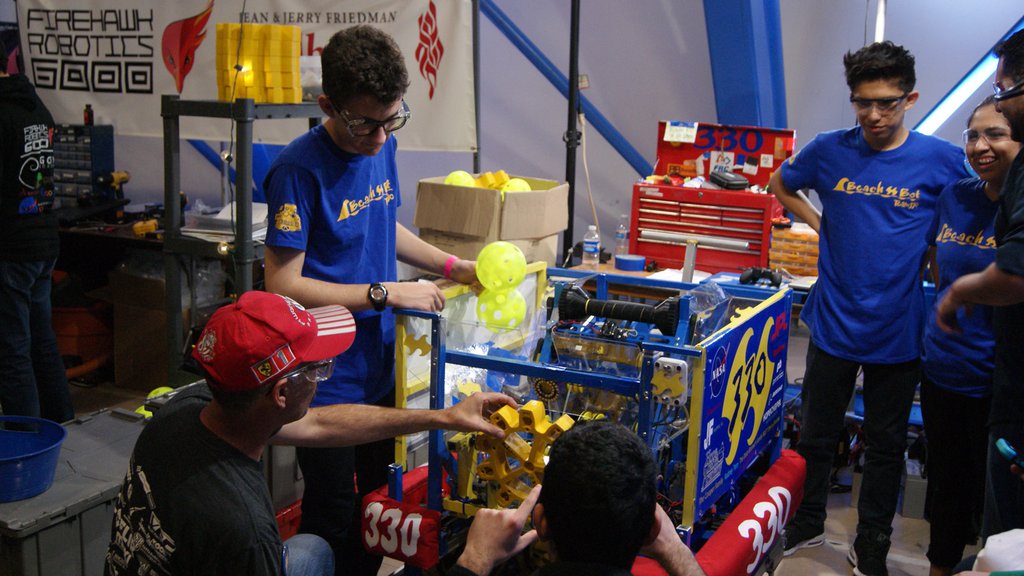 Team 330 checks the Beach Bot in their pit area under the bleachers.
Credit: NASA/JPL-Caltech

Robots zipped through a steampunk-themed competition this past weekend in Long Beach, California.

Roaring crowds, stomping in the bleachers and costumed mascots: all standard fare at the Walter Pyramid arena in Long Beach.

But this past weekend, the glory belonged to high school roboticists from across Southern California.

The FIRST Robotics Competition Los Angeles regionals included 60 teams, a dozen of them sponsored by NASA's Jet Propulsion Laboratory in Pasadena, California. Two of those teams won the final match, meaning they'll be moving on to the national competition to be held in Houston in April.

This was the first year that students joined their robotic creations on the field. The steampunk-inspired theme had them standing on platforms, watching their robots race across the field. The bots delivered objects from the field to each platform; when enough had been collected, the bots climbed up to the platforms, ending the match.

While the parts supplied by FIRST are the same for all the teams, the designs vary. Some bots are better at shooting lime green balls that are scattered across the field. Others are better at climbing up the platform ropes. The alliances give teams a chance to balance out their weak points and share their successes.

More than anything, the competition offers students the chance to build confidence and friendships while inspiring them to study science, technology, engineering and math (STEM) fields.

Jacob Schlossman, a senior at John Burroughs High School in Burbank, participated as a member of Team 980, another one of the JPL-sponsored teams. He said he had always been interested in STEM, and enjoyed learning to design robotic parts working with a CAD system commonly used in the professional world.

"The same skills I use here I could be using for a paying job in the future," Schlossman said.

Schlossman's teammate Kazz Bolaños said she thought of STEM as something beyond her abilities before participating in the FIRST Robotics competition. But after her boyfriend introduced her to a robotics event, she said she was inspired by the sense of community she felt.

"Honestly, the reason I joined was to feel like part of the family," Bolaños said. She worked with Team 980's fabrication group, learning to make robotic parts. She was also part of the business group, which develops outreach opportunities, such as an event at Dodger Stadium that introduced the FIRST competition to the crowds there.

Lauren Rovello, a senior at Anderson W. Clark Magnet High School, said building a robot comes with unique challenges. The bots have to be able to accurately shoot whiffle balls, which are especially unpredictable.

"We had a lot of prototypes. We went through a lot of different materials trying to develop the shooter," she said.

Donna Price, one of Rovello's teammates, said she was growing interested in machining and manufacturing. "I'm interested in possibly going into some space exploration work," she said.

For more information about the FIRST Robotics Competition, visit: