Tumbleweed Rover Goes on a Roll at South Pole 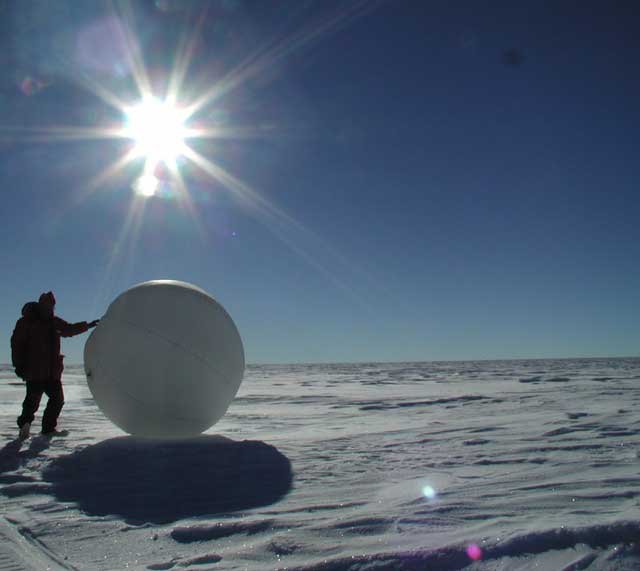 A balloon-shaped robot explorer that one day could search for evidence that water existed on other planets has survived some of the most trying conditions on planet Earth during a 70-kilometer (40-mile), wind-driven trek across Antarctica.

A balloon-shaped robot explorer that one day could search for evidence that water existed on other planets has survived some of the most trying conditions on planet Earth during a 70-kilometer (40-mile), wind-driven trek across Antarctica.

The tumbleweed rover, which is being developed at NASA's Jet Propulsion Laboratory in Pasadena, Calif., left the National Science Foundation's Amundsen-Scott South Pole Station on Jan. 24, and spent the next eight days rolling across Antarctica's polar plateau.

Along the way, the beach ball shaped device, roughly six feet in diameter, used the global Iridium satellite network to send information on its position, the surrounding air temperature, pressure, humidity, and light intensity to a ground station at JPL.

The test was designed to confirm the rover's long-term durability in an extremely cold environment, with an eye toward eventually using the devices to explore the martian polar caps and other planets in the solar system.

The final tumbleweed rover is envisioned as a lightweight, roughly 88-pound device that can serve multiple roles as an independent robotic explorer. The rover's design can allow it to act in turn as a parachute while descending through an atmosphere; an air bag on landing; and, ultimately, as an unmanned vehicle equipped with a package of scientific instruments.

The tumbleweed rover is based on concepts going back to the 1970's and has been pursued by several investigators at JPL. Dr. Alberto Behar, a robotics researcher in the robotic vehicles group recently deployed this prototype at the South Pole. "We are testing a new mode of rover transportation that uses the available environmental resources to give us an added edge to cover more ground using fewer on-board resources," said Dr. Behar. "This gives us the ability to use the precious cargo (on Earth) or payload (in space) mass for more applicable science instrumentation."

Behar said the rover's design is especially well suited for polar missions to use instrument packages to look for water beneath a surface desert or an ice sheet, a task that cannot be done accurately from orbit.

Plans to construct the next generation tumbleweed rover are already underway at JPL. Future refinements of the design are likely to focus on reducing the rover's weight and rolling resistance to reduce the minimum winds needed to enable it to travel farther and the adaptation of the payload to include a ground- penetrating radar to conduct terrain and ice surveys.

Behar says he hopes an updated version of the rover will be deployed again later this year, and the design may one day find itself rolling on the polar icecaps of Mars.

The tumbleweed rover project is managed by NASA's Jet Propulsion Laboratory and was supported jointly by NASA's Office of Space Science, Washington, D.C. and the National Science Foundation.

For more information on the tumbleweed rover visit: http://robotics.jpl.nasa.gov/~behar/southpoletw.htm

For more information on the National Science Foundation visit: http://www.nsf.gov