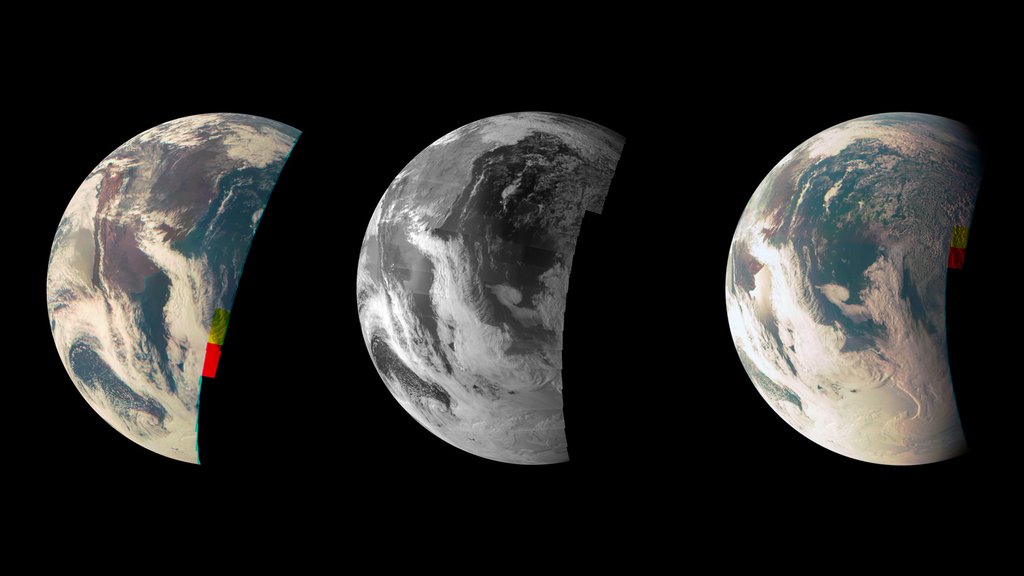 This trio of Junocam views of Earth was taken during Juno's close flyby on October 9, 2013.› Full image and caption
Credit: NASA/JPL-Caltech/MSSS

Scientists on NASA's Juno mission are preparing to receive some stunning images of Jupiter, and they need your help.

When NASA's Juno mission arrives at Jupiter on July 4, 2016, new views of the giant planet's swirling clouds will be sent back to Earth, courtesy of its color camera, called JunoCam. But unlike previous space missions, professional scientists will not be the ones producing the processed views, or even choosing which images to capture. Instead, the public will act as a virtual imaging team, participating in key steps of the process, from identifying features of interest to sharing the finished images online.

"This is really the public's camera. We are hoping students and whole classrooms will get involved and join our team," said Scott Bolton, Juno principal investigator at the Southwest Research Institute in San Antonio.

The Juno team has kicked off the first stage of JunoCam activity with the launch of a new Web platform on the mission's website. Now and throughout the mission, amateur astronomers are invited to submit images of Jupiter from their own telescopes. These views will be the basis for online discussions about which of Jupiter's swirls, bands and spots JunoCam should image as it makes repeated, close passes over the planet. The ground-based views will be essential for identifying and tracking changes in the planet's cloud features as Juno approaches.

"In between our close Jupiter flybys, Juno goes far from the planet, and Jupiter will shrink in JunoCam's field of view to a size too small to be useful for choosing which features to capture. So we really are counting on having help from ground-based observers," said Candy Hansen, a member of the Juno science team who leads planning for the camera.

Juno will get closer to Jupiter than any previous orbiting spacecraft, giving JunoCam the best close-up views yet of the planet's colorful cloud bands. Every 14 days, the spinning, solar-powered spacecraft will dive past the planet in just a couple of hours, gathering huge amounts of science data, plus about a dozen JunoCam images. At closest approach, Juno will snap photos from only 3,100 miles (5,000 kilometers) above Jupiter's clouds.

"JunoCam will capture high-resolution color views of Jupiter's bands, but that's only part of the story," said Diane Brown, Juno program executive at NASA Headquarters in Washington. "We'll also be treated to the first-ever views of Jupiter's north and south poles, which have never been imaged before."

Unlike most spacecraft cameras, JunoCam was specially designed to work on a spinning spacecraft. Typically, spacecraft must point very precisely at their subjects while taking a picture to avoid smearing their images. Since Juno rotates twice per minute, the Juno team designed a camera that images several lines of pixels at a time, at the right speed to cancel out the rotation and avoid smear.

Previously, the best images of Jupiter were taken by NASA's two Voyager spacecraft, which flew past the planet in 1979. JunoCam's field of view is much wider than that of Voyager's narrow-angle camera. This means every JunoCam image is a kind of panorama, and its highest-resolution images will show wide swaths of clouds. The camera also benefits from decades of technology advancement, making it lighter, less power-hungry and lower in cost.

After JunoCam data arrive on Earth, members of the public will process the images to create color pictures. The Juno team successfully tested this approach when JunoCam acquired its first high-resolution views, showing our home planet during the spacecraft's Earth flyby in October 2013.

Since the mission's beginnings, JunoCam was intended almost entirely as a public outreach tool, in contrast to the spacecraft's other instruments that will address Juno's core science questions. Juno scientists will ensure JunoCam returns a few great shots of Jupiter's polar regions, but the overwhelming majority of the camera's image targets will be chosen by the public, with the data being processed by them as well.

"We want to give people an opportunity to participate with NASA, and public involvement is key to JunoCam's success," said Bolton. "This is citizen science at its best."

Information about JunoCam's new features for amateur astronomer engagement is available at:

The JunoCam Web platform will soon add a discussion section to begin identifying features of interest on the planet for JunoCam to image.

The Juno mission website, designed and developed by Radical Media since 2011, has been augmented and updated to include new features in addition to the site's interactive JunoCam section.

Launched in 2011, the Juno mission uses every known technique to probe beneath the obscuring cloud cover of Jupiter to learn more about the planet's origins, structure, atmosphere and magnetosphere.

NASA's Jet Propulsion Laboratory, Pasadena, California, manages the Juno mission for the principal investigator, Scott Bolton, of Southwest Research Institute in San Antonio. Juno is part of NASA's New Frontiers Program, which is managed at NASA's Marshall Space Flight Center in Huntsville, Alabama. Lockheed Martin Space Systems, Denver, built the spacecraft. JPL is a division of the California Institute of Technology, in Pasadena, which manages the laboratory for NASA.