To Inspire, Be Inspired 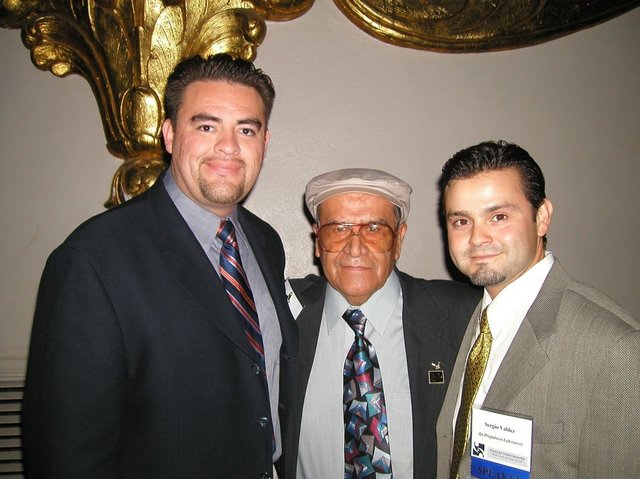 If you want to be an inspirational teacher, it's not hard: You have to be inspired yourself.

Jaime Escalante is a legend in the education field. When he started teaching math in 1974 at Garfield High School in East Los Angeles, he inspired inner-city Latino students to excel on advanced placement exams in math. His experiences were illustrated in the motion picture, "Stand and Deliver." If you ask Escalante's former students about the key to their success, they won't hesitate in their response: It was Escalante's passion for excellence that helped them achieve.

Escalante walks the talk when it comes to educational excellence. His classroom setting was vibrant, current and demanding, just like his teaching style. He made no concessions for special circumstances; he expected the best, but when students participated, he rewarded them with enthusiastic support and inspiration.

Sergio Valdez and Thomas Valdez (who are not related) graduated from Garfield High in 1991. They're now both employed at NASA's Jet Propulsion Laboratory in Pasadena, Calif., where Sergio is a supervisor in the mechanical engineering section and Thomas is a research engineer. They both started at JPL as summer student employees, and then continued on to earn their bachelor's degrees in engineering and full-time employment with NASA. Sergio also earned a master's in mechanical engineering, as well as an MBA; Thomas has a master's in materials engineering and is pursuing his doctorate in materials science.

Thomas says that Escalante gave him the tools to succeed as a scientist. "He taught me about discipline and work ethic. He taught me to focus my energies, develop skills and push away from negative influences," Thomas said.

Most teachers want to see their students succeed and surpass expectations. What made Escalante's students shine so much brighter than others?

"Mr. Escalante created an environment so that we enjoyed the work we were doing in his math classes," Sergio Valdez said. "He also took the time to show us how these skills were applied in real life situations."

"The way a teacher carries himself really matters," Sergio Valdez said. "Enthusiasm also matters. You have to enjoy teaching and have passion. This creates the setting for students to make their school work into something they want to do. Jaime was good at eliminating mental barriers. Instead of allowing us to say, 'I'm not good at math,' he reminded us that anyone can learn math, and that we were going to succeed. His encouragement and reinforcement raised the bar and so we set out to meet our goals. Once you achieve the first goal, you set a new one and keep going."

How do educators inspire students? Thomas Valdez feels that it's in role modeling. "You have to be inspired and passionate yourself. You connect to the real world, ask difficult questions, encourage shy kids by asking group questions and you keep that fire burning in your heart."

"You cannot allow preconceived notions of a student to influence how you interact with them. Keep high standards and teach them equally. Everyone has to work hard to succeed. Insist that goals be met and keep that bar high."

Escalante's teaching was supplemented by student teaching assistants who'd already taken algebra. Thomas and Sergio Valdez started with Escalante in their sophomore year of high school, when they enrolled in his Algebra II class. The Valdezes then took a summer program of trigonometry, and the next year became teaching assistants for other newer students.

"Students teaching students gives a sense of passing skills down through the community," Thomas Valdez said. "It became a great source of pride for the assistants, and became a strong motivator for the other students."

Escalante was dedicated to his teaching and to his students, and that dedication impressed his class. Students routinely met him for breakfast where they discussed math and worked on problems. Escalante and his students came into school an hour early and stayed an hour after dismissal to provide extra math tutoring. Escalante made arrangements with local colleges for extra programs and obtained funding for food and travel to college events -- so that money would never be a reason for students not participating.

"Mr. Escalante even let me bring my sister into summer classes when I had to baby sit." Sergio Valdez said. "And that was okay with him. He lived for his students and he was determined to see them succeed."

How can educators give their students incentives? Sergio Valdez says it revolves around real life experiences in the classroom.

"When I was in high school, I'd never met an engineer before. I never really knew what they did. I needed professional role models. If teachers make the effort to network and invite professionals into the classroom, students will see examples of people who perform real work that involves math. Meeting professionals helps students tie goals to a realistic setting. Engineers don't sit at their desks and do math problems from a text book. There are real-world applications to what is being taught in school. Just as going shopping illustrates how we add and subtract in our head everyday, meeting real professionals brings advanced math and science skills to life."

Sergio and Thomas are both in their early 30's now. They have busy schedules at JPL, but find time to work with Escalante and speak with groups of educators and pre-service teachers. They also encourage and motivate high school and college students . As Hispanic Americans, they feel grateful for the mentoring they received through Escalante, and are glad to return the favor for the next generation.