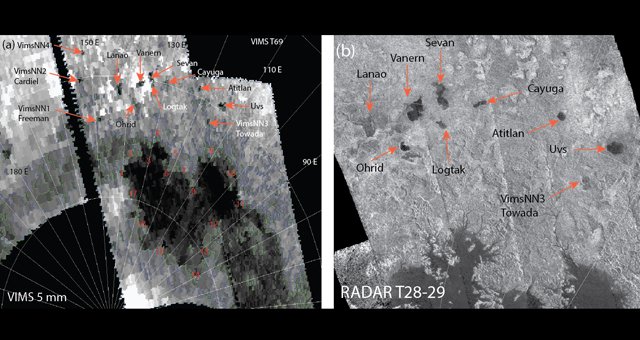 These images from NASA's Cassini spacecraft show one of the large seas and a bounty of smaller lakes on Saturn's moon Titan. Scientists saw these small lakes in data obtained by both Cassini's visual and infrared mapping spectrometer (left) and radar instrument (right).› Full image and caption
Credit: NASA/JPL-Caltech/University of Arizona

NASA's Cassini mission tracks long-lived lakes in Titan's northern hemisphere and finds that the moon's methane may be disappearing.

By tracking a part of the surface of Saturn's moon Titan over several years, NASA's Cassini mission has found a remarkable longevity to the hydrocarbon lakes on the moon's surface.

A team led by Christophe Sotin of NASA's Jet Propulsion Laboratory in Pasadena, Calif., fed these results into a model that suggests the supply of the hydrocarbon methane at Titan could be coming to an end soon (on geological timescales). The study of the lakes also led scientists to spot a few new ones in images from Cassini's visual and infrared mapping spectrometer data in June 2010.

Titan is the only other place in the solar system besides Earth that has stable liquid on its surface. Scientists think methane is at the heart of a cycle at Titan that is somewhat similar to the role of water in Earth's hydrological cycle - causing rain, carving channels and evaporating from lakes. However, the fact that the lakes seem remarkably consistent in size and shape over several years of data from Cassini's visual and infrared mapping spectrometer suggests that the lakes evaporate very slowly. Methane tends to evaporate quickly, so scientists think the lakes must be dominated by methane's sister hydrocarbon ethane, which evaporates more slowly.

The lakes are also not getting filled quickly, and scientists haven't seen more than the occasional outburst of hydrocarbon rain at the moon over the mission's eight-plus years in the Saturn system. This indicates that on Titan, the methane that is constantly being lost by breaking down to form ethane and other heavier molecules is not being replaced by fresh methane from the interior. The team suggests that the current load of methane at Titan may have come from some kind of gigantic outburst from the interior eons ago possibly after a huge impact. They think Titan's methane could run out in tens of millions of years.

For more information on this finding and the lakes, visit http://saturn.jpl.nasa.gov/news/cassiniscienceleague/science20130412/ .