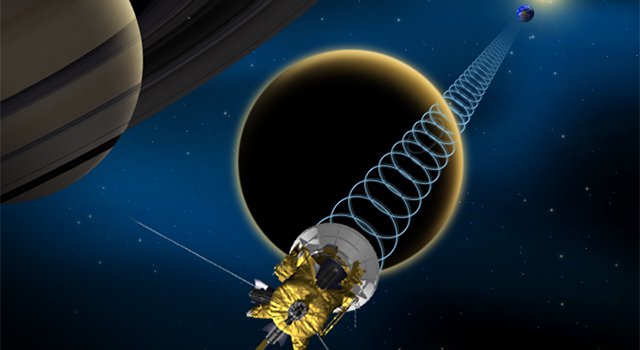 Cassini will attempt to bounce signals off of Saturn's moon Titan once more during a flyby on June 18, 2014, revealing important details about the moon's surface.
Credit: NASA/JPL-Caltech 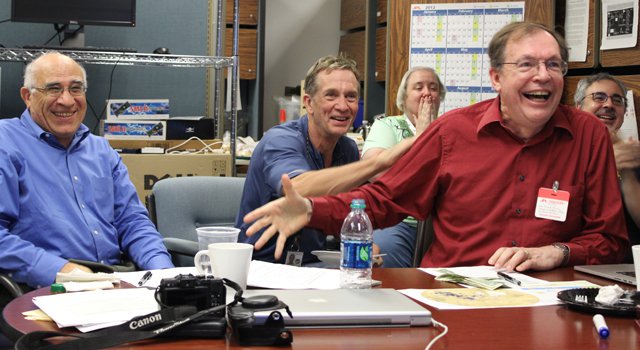 Cassini team members react with excitement to the successful receipt of radio signals bounced off of Titan during a flyby on May 17, 2014.
Credit: NASA/JPL-Caltech

As NASA's Cassini spacecraft zooms past Titan during a June 18 flyby, it will be bouncing radio waves off the moon's surface and through its atmosphere, toward Earth.

As NASA's Cassini spacecraft zooms toward Saturn's smoggy moon Titan for a targeted flyby on June 18, mission scientists are excitedly hoping to repeat a scientific tour de force that will provide valuable new insights into the nature of the moon's surface and atmosphere.

For Cassini's radio science team, the last flyby of Titan, on May 17, was one of the most scientifically valuable encounters of the spacecraft's current extended mission. The focus of that flyby, designated "T-101," was on using radio signals to explore the physical nature of Titan's vast northern seas and probe the high northern regions of its substantial atmosphere.

The Cassini team hopes to replicate the technical success of that flyby during the T-102 encounter, slated for June 18, during which the spacecraft will attempt similar measurements of Titan. During closest approach, the spacecraft will be just 2,274 miles (3,659 kilometers) above the surface of the moon while travelling at 13,000 miles per hour (5.6 kilometers per second).

During the upcoming flyby, if all goes well as before, Cassini's radio science subsystem will bounce signals off the surface of Titan, toward Earth, where they will be received by the ground stations of NASA's Deep Space Network. This sort of observation is known as a bistatic scattering experiment and its results can yield clues to help answer a variety of questions about large areas of Titan's surface: Are they solid, slushy or liquid? Are they reflective? What might they be made of?

During the May encounter, Cassini beamed radio signals over the two largest bodies of liquid on Titan, seas named Ligeia Mare and Kraken Mare. During that first attempt, scientists could not be certain the signals would successfully bounce off the lakes to be received on Earth. They were thrilled when ground stations received specular reflections -- essentially the glint -- of the radio frequencies as they ricocheted off Titan.

"We held our breath as Cassini turned to beam its radio signals at the lakes," said Essam Marouf, a member of the Cassini radio science team of San Jose State University in California. "We knew we were getting good quality data when we saw clear echoes from Titan's surface. It was thrilling."

A second technical accomplishment -- an experiment to send precision-tuned radio frequencies through Titan's atmosphere -- also makes the May and June flybys special. The experiment, known as a radio occultation, provides information about how temperatures vary by altitude in Titan's atmosphere. Preparing for these experiments tested just how thoroughly the Cassini team has come to understand the structure of Titan's atmosphere during nearly a decade of study by the mission.

During this type of radio occultation, a signal is beamed from Earth through the atmosphere of Titan toward the Cassini spacecraft, which responds back to Earth with an identical signal. Information about Titan is imprinted in the signal as it passes through the moon's atmosphere, encountering differences in temperature and density. The trick is that the transmitted signal must be varied during the experiment so that it remains nearly constant when received by the spacecraft.

In order to give the occultation experiments any chance of success, the team has to account for not only the relative motions of the spacecraft and the transmitting antennas on the rotating planet Earth, but also the ways the signal is bent by different layers in Titan's atmosphere.

While this procedure has been used successfully for several Saturn occultations in the past two years, it had not yet been tried at Titan. And since the Titan occultations last just a few minutes, the team was concerned about how quickly the frequency lockup between ground and spacecraft could be established, if at all. For comparison, NASA's Magellan mission tried the technique at Venus in the 1990s, without success.

As they waited for signs of confirmation during the May encounter, the team saw the signal lock occur in only a few seconds, indicating that their predictions were spot-on. Data on Titan's atmosphere flowed in, adding new information to the mission's campaign to monitor the changing of the seasons on this alien moon.

"This was like trying to hit a hole-in-one in golf, except that the hole is close to a billion miles away, and moving," said Earl Maize, Cassini project manager at NASA's Jet Propulsion Laboratory in Pasadena, California. "This was our first attempt to precisely predict and compensate for the effect of Titan's atmosphere on the uplinked radio signal from Earth, and it worked to perfection."

The Cassini-Huygens mission is a cooperative project of NASA, the European Space Agency and the Italian Space Agency. JPL, a division of the California Institute of Technology, Pasadena, manages the mission for NASA's Science Mission Directorate in Washington. The radio science team is based at JPL. NASA's Deep Space Network is also managed by JPL.