'Tis the Season -- for Plasma Changes at Saturn 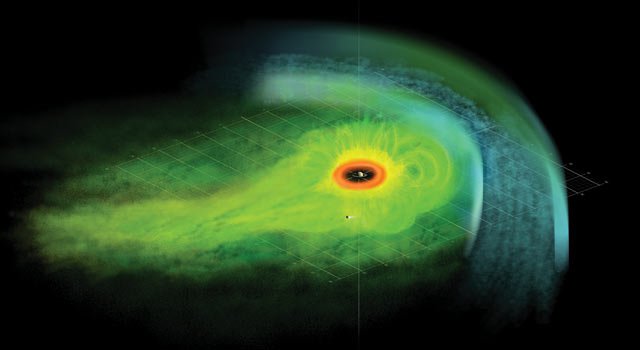 This is an artist's concept of the Saturnian plasma sheet based on data from Cassini magnetospheric imaging instrument. It shows Saturn's embedded "ring current," an invisible ring of energetic ions trapped in the planet's magnetic field.› Full image and caption
Credit: NASA/JPL/JHUAPL

NASA's Cassini mission helps reveal seasonal changes in the bubble of charged particles around Saturn, providing a clue to some long-standing mysteries.

Researchers working with data from NASA's Cassini spacecraft have discovered one way the bubble of charged particles around Saturn -- known as the magnetosphere -- changes with the planet's seasons. The finding provides an important clue for solving a riddle about the planet's naturally occurring radio signal. The results might also help scientists better understand variations in Earth's magnetosphere and Van Allen radiation belts, which affect a variety of activities at Earth, ranging from space flight safety to satellite and cell phone communications.

The paper, just published in the Journal of Geophysical Research, is led by Tim Kennelly, an undergraduate physics and astronomy major at the University of Iowa, Iowa City, who is working with Cassini's radio and plasma wave science team.

In data collected by Cassini from July 2004 to December 2011, Kennelly and his colleagues examined "flux tubes," structures composed of hot, electrically charged gas called plasma, which funnel charged particles in towards Saturn. Focusing on the tubes when they initially formed and before they had a chance to dissipate under the influence of the magnetosphere, the scientists found that the occurrence of the tubes correlates with radio wave patterns in the northern and southern hemisphere depending upon the season. This seasonal effect is roughly similar to the way Earth's northern lights appear more frequently in the spring and autumn months.

Radio emissions have been used to measure Jupiter's rotation period reliably, and scientists thought it would also help them determine Saturn's rotation period. To their chagrin, however, the pattern has varied over the visits by different spacecraft and even in radio emissions originating in the northern and southern hemispheres. The new results could help scientists hone in on why these signals vary the way they do.

The Cassini-Huygens mission is a cooperative project of NASA, the European Space Agency and the Italian Space Agency. NASA's Jet Propulsion Laboratory in Pasadena, Calif., manages the mission for the agency's Science Mission Directorate in Washington. The radio and plasma wave science team is based at the University of Iowa, Iowa City, where the instrument was built. JPL is a division of the California Institute of Technology, Pasadena.

For more information about the Cassini-Huygens mission, visit http://saturn.jpl.nasa.gov and http://www.nasa.gov/cassini.