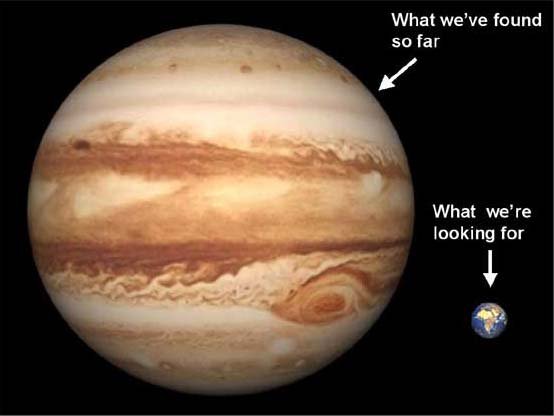 Most of the extrasolar planets are gas giants like Jupiter (left), much larger than Earth. 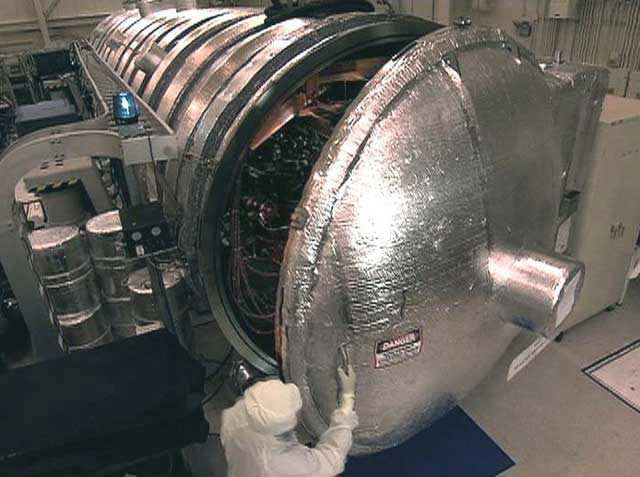 The testbed experiments are conducted inside an enormous vacuum chamber that simulates the conditions of space. 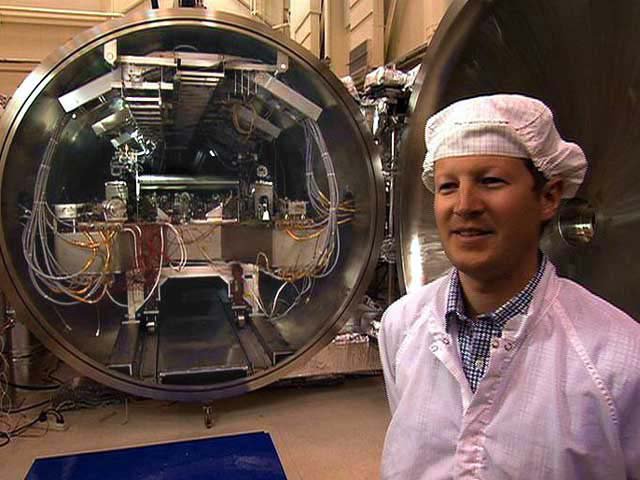 To detect the stellar wobble caused by a planet as small as Earth, scientists need an instrument of almost unbelievable sensitivity.

Even though astronomers have discovered more than 100 planets around stars other than the Sun in recent years, the "holy grail" of the search -- an Earth-sized planet capable of supporting life -- remains elusive. The main problem is that an Earthlike planet would be much smaller than any of the gas giants detected so far (see illustration at right).

Planets orbiting other stars are too dim to be observed directly, but scientists infer their presence by the tiny gravitational "wobble" they induce in their parent stars. Observed from tens of light years away (one light-year is 5.88 trillion miles), this movement becomes very tiny indeed. The smaller the planet, the less the star parent wobbles.

To detect the stellar wobble caused by a planet as small as Earth, scientists need an instrument of almost unbelievable sensitivity. Let's say there's an astronaut standing on the moon, wiggling her pinky. You'd need an instrument sensitive enough to measure that movement from Earth, a quarter million miles away.

In order to do that, the instrument needs to be a "ruler" accurate to within just one-tenth the width of a hydrogen atom. That's about 1 millionth of the width of the thickest human hair.

Is such precision possible? After a six-year struggle, engineers at the Jet Propulsion Laboratory recently proved that the answer is yes.

Such sub-atomic measurements were conducted for the first time ever within a vacuum-sealed chamber called the Microarcsecond Metrology Testbed.

By doing this, the engineers proved they can measure the movements of stars with an astonishing degree of accuracy never before achieved in human history.

The testbed, which resembles a shiny silver submarine, is jammed with mirrors, lasers, lenses and other optical components. Because even small air movements can interfere with the measurements, all air is pumped out of the chamber before each experiment is run. Laser beams, moving mirrors and a camera are used to help detect movements of an artificial star, which simulates the light that would be emitted by a real star.

The instrument that engineers have demonstrated in the laboratory will become the heart of a revolutionary new space telescope known as the Space Interferometry Mission.

"Six-and-a-half years ago, this technology was unproven and unsubstantiated," said Brett Watterson, the mission's deputy project manager. "It was just a remote possibility that we could do it. It was through ingenuity, insight, leadership and sheer perseverance that the team was able to overcome these difficult technological challenges."

NASA recently gave the go-ahead for the second stage of development for the mission, which will not only be able to search for Earth-like planets around other stars, but will also measure cosmic distances several hundred times more accurately than currently possible. Scheduled to launch in 2009, it will scan the heavens for five years and provide astronomers with the first truly accurate road map of our Milky Way galaxy.

"This is a historical time that we're intimately involved with," Watterson said. "Unlike any other culture in history, we have the technological means, the budget, and the will to determine the occurrence of Earthlike planets orbiting other stars. Everyone on the team is aware of their role in this pivotal stage in the search for life elsewhere in the universe."

The Space Interferometry Mission is managed by JPL as part of NASA's Origins program.