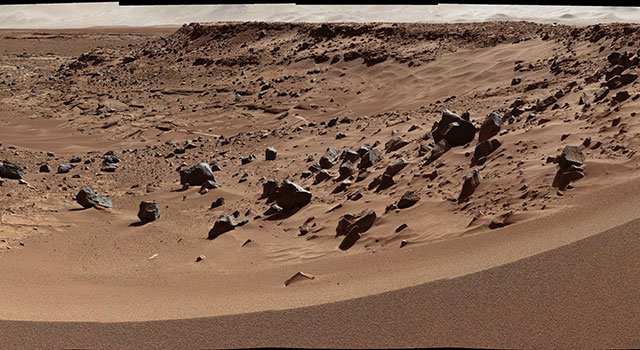 This view combines several frames taken by the Mast Camera (Mastcam) on NASA's Mars rover Curiosity, looking into a valley to the west from the eastern side of a dune at the eastern end of the valley.› Full image and caption
Credit: NASA/JPL-Caltech/MSSS

NASA's Curiosity Mars Rover has crossed a dune that stands across a gateway to a southwestward route favored by the rover team for driving to future science destinations.

After reaching the west side of the 3-foot-tall (1-meter-tall) dune today, the rover looked back at its tracks down the western slope. A raw image of the rover's tracks over the dune is at: http://1.usa.gov/Mw9HmZ .

The dune sits between low scarps at a site called "Dingo Gap" inside Mars' Gale Crater. Now that Curiosity has passed through the gap, engineers and scientists plan to direct the mobile laboratory toward a location of interest where different rock types intersect. That is a candidate site for next use of the rover's drill. Beyond that, the drive will continue toward the mission's long-term science destination on lower slopes of Mount Sharp, in the middle of the crater.

A final decision on whether to pass through this valley will ride on evaluation of a short drive planned this week toward the top of the dune that lies across "Dingo Gap." The dune is about 3 feet (1 meter) high at its center, tapered off at both sides of the gap between two low scarps. A color view assembled from images taken by Curiosity's Mast Camera (Mastcam) on the east side of the dune shows details of the valley that the rover may traverse this month.