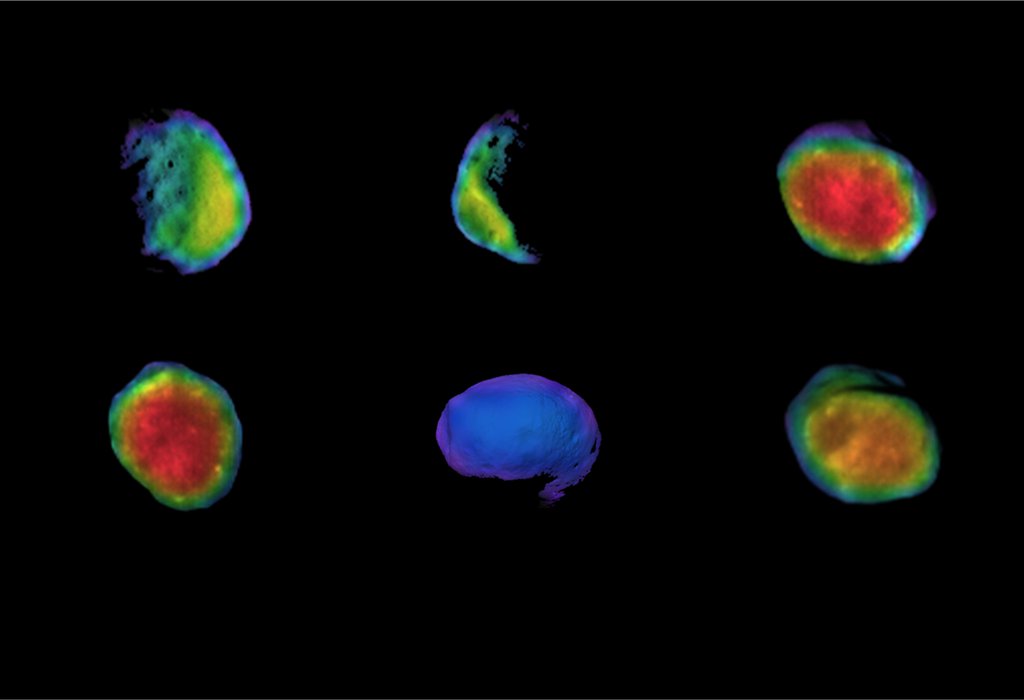 Six views of the Martian moon Phobos captured by NASA's Odyssey orbiter as of March 2020. The orbiter's THEMIS camera is used to measure temperature variations that suggest what kind of material the moon is made of.
Credit: NASA/JPL-Caltech/ASU/NAU
Full Image Details

Taken with the infrared camera on NASA's Odyssey orbiter, the images reveal temperature variations aboard the small moon as it drifts into and out of Mars' shadow.

Three new views of the Martian moon Phobos have been captured by NASA's Odyssey orbiter. Taken this past winter and this spring, they capture the moon as it drifts into and out of Mars' shadow.

The orbiter's infrared camera, the Thermal Emission Imaging System (THEMIS), has been used to measure temperature variations across the surface of Phobos that provide insight into the composition and physical properties of the moon. Further study could help settle a debate over whether Phobos, which is about 16 miles (25 kilometers) across, is a captured asteroid or an ancient chunk of Mars that was blasted off the surface by an impact.

Led by NASA's Jet Propulsion Laboratory in Southern California, Odyssey's mission is mostly dedicated to studying the Martian surface. But in recent years, a process has been developed to flip the spacecraft upside-down so it can point its camera at Phobos.

Among the three new images, the one taken Dec. 9, 2019, shows Phobos in full-moon phase, when more of the surface is exposed to sunlight, with a maximum temperature of 81 degrees Fahrenheit (27 degrees Celsius). An image taken Feb. 25, 2020, shows Phobos while in eclipse, where Mars' shadow completely blocked sunlight from reaching the moon's surface.This provided some of the coldest temperatures measured on Phobos to date, with the lowest being about minus 189 degrees Fahrenheit (minus 123 degrees Celsius). On March 27, 2020, Phobos was observed exiting an eclipse, when the surface was still warming up.

All of the THEMIS infrared images are colorized to show temperature variations and are overlain on THEMIS visible-light images taken at the same time to show the geology of the surface. The one exception is the eclipse image, which is computer-generated and shows what Phobos would have looked like if it wasn't in complete shadow.

Combined with three previous images, these observations represent waxing, waning and full views of the moon. The Odyssey team plans to observe crescent phases in coming months, providing a comprehensive view of how Phobos' surface warms and cools as it rotates.

"We're seeing that the surface of Phobos is relatively uniform and made up of very fine-grained materials," said Christopher Edwards of Northern Arizona University in Flagstaff, who leads the processing and analysis of the Phobos images. "These observations are also helping to characterize the composition of Phobos. Future observations will provide a more complete picture of the temperature extremes on the moon's surface."

Odyssey has been orbiting Mars since 2001. It takes thousands of images of the Martian surface each month, many of which help scientists select landing sites for future missions. One of the sites Odyssey captured pictures of is Jezero Crater, the landing site for NASA's Perseverance rover, which launches to Mars this summer. Odyssey also serves an important role relaying commands and data for Mars' newest inhabitant, NASA's InSight lander.

THEMIS was built and is operated by Arizona State University in Tempe. The prime contractor for the Odyssey project, Lockheed Martin Space in Denver, developed and built the orbiter. Mission operations are conducted jointly from Lockheed Martin and from JPL, a division of Caltech in Pasadena.