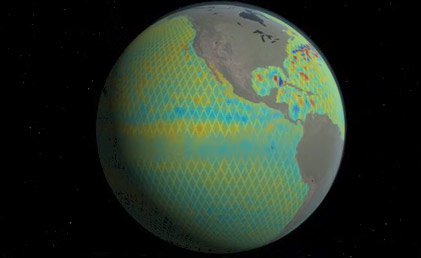 Three scientists at NASA's Jet Propulsion Laboratory and university professor have dated the most powerful volcano eruption in recorded history, the Thera/Santorini eruption, to the late 17th Century BC.

Three scientists at NASA's Jet Propulsion Laboratory and university professor have dated the most powerful volcano eruption in recorded history, the Thera/Santorini eruption, to the late 17th Century BC.

The Aegean Sea island of Thera, now known as Santorini, erupted with power equal to two million Hiroshima-type atomic bombs, said Drs. Kevin Pang, Santosh Srivastava and Robert Keston, all of JPL, and Hung-hsiang Chou of the University of California at Los Angeles.

Results of the study, funded at JPL in Pasadena, Calif., by NASA, were prepared for presentation before Dec. 5 session of the 1989 Fall Meeting of the American Geophysical Union at San Francisco.

The effects of Thera's explosion were felt around the world and the island's destruction was believed to be the source of Plato's story of Atlantis, which tells of an island civilization submerged by the sea, the scientists said.

Recent archaeological studies suggest Atlantis may have been the Minoan centers of Crete destroyed by tidal waves from the Thera eruption, Pang said.

"Our previous search for Chinese historical accounts of the atmospheric effects of very large eruptions recorded in Greenland ice cores has been 100 percent successful," Pang said. "And Thera/Santorini, the most powerful historical eruption, is no exception."

"Frosts in the 6th month (July)." "Last year of King Chieh, ice formed in the morning," (very unusual for the Yellow River Valley in that period).

The records also indicate crop failures and famine. Also, "There was heavy rainfall and communities were destroyed." The floods were followed by severe drought that lasted seven years into the next (Shang) dynasty.

The heavy rainfall is characteristic atmospheric effect of major volcanic eruptions, Pang said. Cold, wet summers also followed three other eruptions traced through similar methods, the Tambora in 1815, Laki in 1783, and an unnamed Icelandic eruption in 208 BC.