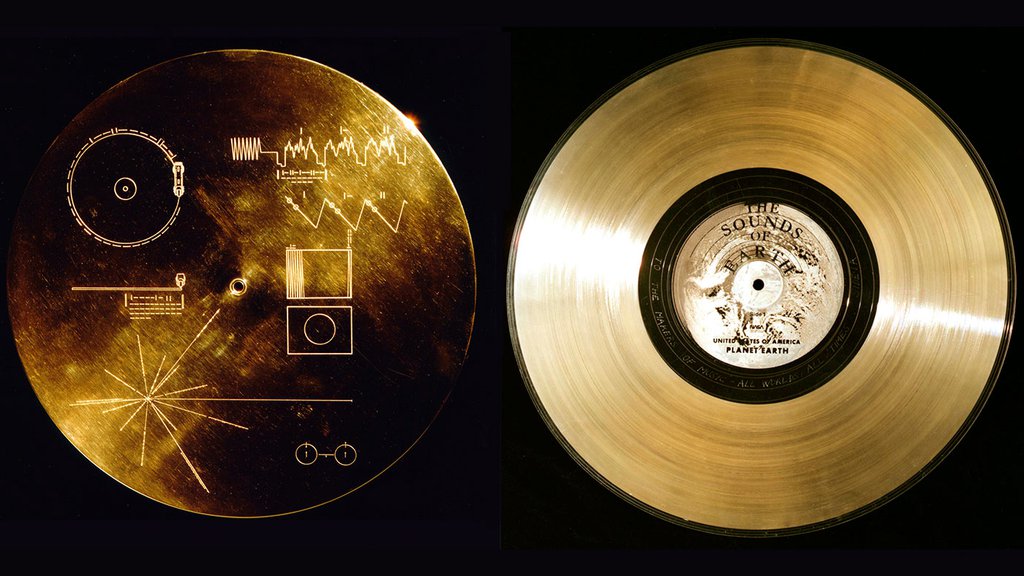 Each Voyager spacecraft carries a copy of the Golden Record, which has been featured in several works of science fiction. The record's protective cover, with instructions for playing its contents, is shown at left.
Credit: NASA/JPL-Caltech

The Voyagers have been featured in many movies, TV shows and songs during the course of their epic 40-year journeys.

Whether you're traveling across cities, continents or even oceans this holiday season, there is no long-haul flight quite like that of the Voyagers.

This year, we celebrated 40 years since the launch of NASA's twin Voyager probes -- the two farthest, fastest spacecraft currently in operation. Each Voyager has contributed an enormous amount of knowledge about the solar system, including the unexpected diversity of its planets and their moons. Among their many distinctions, Voyager 1 is the only spacecraft to enter interstellar space, and Voyager 2 is the only spacecraft to fly by all four giant planets: Jupiter, Saturn, Uranus and Neptune.

You might have missed the virtual Voyager party, though, since there was a lot of other space news around the time of the Voyager launch anniversaries. The solar eclipse, visible across America, took place on Aug. 21, just one day after Voyager 2 marked 40 years in flight. Sept. 5 was Voyager 1's launch anniversary, but space fans were already gearing up to commemorate the finale of NASA's Cassini mission on Sept. 15.

So, since you might have some downtime as we head into the holidays, here are some Voyager-related movies, TV shows and songs. (Warning: a few spoilers ahead!)

Voyagers in Film and Television

Perhaps the most widely recognized pop culture Voyager homage is in the film "Star Trek: The Motion Picture" from 1979. In the film, a machine called V'Ger -- the fictional Voyager 6 spacecraft, its intelligence greatly enhanced by an alien race -- seeks the home of its creator, Earth, and threatens to wreak havoc on our planet in the process. In real life, John Casani, who was the Voyager project manager at that time at NASA's Jet Propulsion Laboratory in Pasadena, California, offered to loan a Voyager model to "Star Trek" creator Gene Roddenberry. Although the movie version altered the original design, it still used the mission as an inspiration.

The spacecraft had long passed the planets when a 2004 episode of "The West Wing" -- titled "The Warfare of Genghis Khan" -- mentioned a major mission milestone: Voyager 1 crossing the termination shock. The termination shock is a shockwave that marks the point at which the solar wind from the Sun, which travels at supersonic speeds up to that point, abruptly slows down and heats up. It represents the innermost part of the boundary of the heliosphere, the magnetic bubble that includes the Sun, planets and solar wind. Due to the termination shock crossing, the character Josh Lyman (mistakenly) declares this Voyager 1 to be the first man-made object to leave our solar system (mistakenly, because the solar system ends well beyond that landmark). "Funny, I'm going through a little termination shock myself," quips the character Donna Moss.

More recently, Voyager 1 did, in real life, cross into interstellar space in 2012, although technically it has still not left the solar system. In 2013, to talk about that milestone, the mission's project scientist, Ed Stone of Caltech in Pasadena, appeared on Comedy Central's Colbert Report.

Each Voyager contains a copy of a Golden Record filled with Earth's sights and sounds, including images, music and audio clips of people and animals. This record has been featured in several works of science fiction. In the 1984 film "Starman," a race of aliens discovers the record and sends an emissary to Earth to learn more about our planet.

A 1994 episode of the X-Files titled "Little Green Men" also paid homage to Voyager. The episode opens with FBI agent Fox Mulder describing the Voyager mission and the Golden Record, including images, music and a child's voice saying, "Hello from the children of planet Earth." Mulder says the Voyagers passed the orbit of Neptune and "there were no further messages sent," but in reality, the Voyagers still communicate with Earth every day.

The mission wasn't exempt from fun on "Saturday Night Live." In episode 64, which aired in 1978, a psychic played by actor Steve Martin says the extraterrestrials had found the record and replied, "Send More Chuck Berry" -- referring to the iconic song "Johnny B. Goode" included on the Golden Record. Learn more about the Golden Record and see a full list of its contents here.

Voyager has proved inspirational to contemporary musicians and songwriters as well. The Academy Award-winning composer Dario Marianelli wrote a Voyager violin concerto, which was first performed by the Queensland Symphony Orchestra in 2014 in Brisbane, Australia, and later played by the Swedish Radio Orchestra. Artist James Stretton also wrote a song in honor of the Voyagers' 40th anniversary.

For a deep dive into the history of the mission, the documentary "The Farthest" premiered on PBS in August, featuring numerous interviews with Voyager scientists and engineers, past and present.

And if you get tired of looking at your own vacation photos, there are lots to explore on the Voyager website. Live long and prosper, Voyagers!