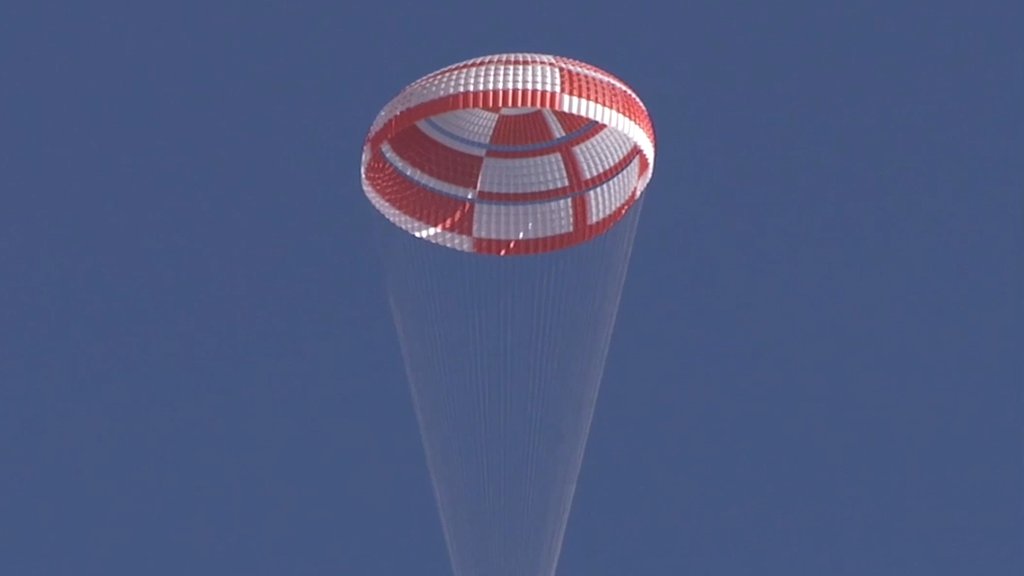 The Supersonic Ringsail parachute that will be used during the Low-Density Supersonic Decelerators test this June from Kauai, Hawaii, was first tested at the Naval Air Weapons Station China Lake, California, on February 18.
Credit: NASA/JPL-Caltech/US Navy

Building a better parachute - one goal of a team working on NASA's LDSD, a project to develop breakthrough technologies for landing future robotic and human Mars missions.

It was not your typical NASA meeting. But then again, it would have been difficult to have a typical NASA meeting surrounded by all the hooks, nets, processing tables and other fishy paraphernalia found in a corrugated shack on a pier on the south coast of Kauai, Hawaii. But those assembled there on June 29, 2014, didn't really care about their surroundings, nor the musty, aquatic smell of the place. What the 60 scientists and engineers of NASA's Low-Density Supersonic Decelerator (LDSD) team wanted at that moment more than anything was an unobstructed view. A small laptop was playing the first memory card pulled from their saucer-shaped LDSD test vehicle freshly fished from the ocean after its Mach 4 trip to the edge of space.

"It would be fair to say there was a little jockeying for position," said Ian Clark, principal investigator of LDSD from NASA's Jet Propulsion Laboratory, Pasadena, California. "Everybody was dying to see in glorious high resolution what we only had hints of from the cruddy video in the telemetry the day before."

The LDSD team watched as the saucer's rocket kicked in. They watched Earth's horizon recede, and they cheered as the mission's massive inflatable donut, called the supersonic inflatable aerodynamic decelerator (SIAD), worked flawlessly. But then it came time for the deployment of the largest supersonic parachute ever tested.

"The parachute was moving and inflating faster than we ever thought possible. Suspension lines were all over the place. There was canopy asymmetry, parts of the envelope trying to inflate inside out, and holes starting and propagating wherever you looked, said Clark. "There was so much going on in that video in all sorts of gory detail that we did not understand."

We quickly realized to solve this thing we were going to need all the help we could get. If I had a Bat-Signal I would have used it."

The Supreme Council of Parachute Experts (SCOPE) was born. The team's hope: that the council's findings could provide important input to the re-design, manufacture and test of a supersonic parachute for their upcoming June 2015 flight test of LDSD. LDSD is testing breakthrough technologies for landing future robotic and human Mars missions.

The plan was to get the best experts in the world in parachute design and fabrication in a room, show them the LDSD data and let the hypotheses fly. Clark quickly found one of the biggest challenges with convening such a supreme council was finding anyone who would admit to being an expert.

"There is an old saying in the parachute community -- the only parachute expert is the person who admits there is no such thing as a parachute expert," said Clark. "It was pretty funny to hear that come from some of the people I called. Here they were, with 40 to 50 years of parachute experience, saying they were no expert. Well, they may be no experts but still they are the most knowledgeable in the world."

Any reluctance the "experts" had to participate quickly eroded when Clark described the data set they would get to work with first hand. After all, all previous testing of parachutes at the edge of space at supersonic speeds took place back in the 1960s and 70s. Together, the Planetary Entry Parachute Program, the Supersonic Planetary Entry Decelerator Program, and the Supersonic High Altitude Parachute Experiment would make 16 flights. Their data set would be the only one available for the design and development of supersonic chutes for every NASA Mars landing mission: Viking, Pathfinder, the Mars Exploration rovers Spirit and Opportunity, Phoenix, and Mars Science Laboratory/Curiosity rover, as well as the Pioneer Venus and Galileo Jupiter missions. But the quality of the data collected in these tests was limited by the recording instrumentation of the day -- including grainy 16mm movie footage, which at times could be as jumpy and out of focus as it was under or overexposed.

"It was the 1960s. Supersonic, hypersonic and space travel was in its infancy and so was learning how to slow down from these high speeds," said Clark. "In that knowledge vacuum, these engineers had to be extremely conservative. They had to apply fudge factors to every predicted max load. I mean they just pulled numbers out -- took whatever number came out of their analyses and added 50 percent or more...and it worked for them."

But being ultra-conservative is difficult when you want to wring every last ounce of performance out of a parachute. LDSD's highly-sensitive suite of sensors and its high-speed, ultra-high-resolution video would go a long way to pulling back the veil and explaining what really happens when hundreds of pounds of broadcloth are thrown into a supersonic slipstream. It was too tantalizing an opportunity to pass up.

The first meeting of SCOPE was convened at JPL in the fall of 2014. All told, through the spring of 2015, there would be five meetings at five different locations around the country, as well as countless hallway conversations, follow-up phone calls, emails and Skype chats. The participant list was a who's who in the high-speed parachute world, and included involvement from the Department of Defense, every NASA Mars landing since Viking, as well as the Gemini, Apollo, space shuttle and Orion programs.

"It was like we were a bunch of football coaches going over game tape," said Clark. "We would show it to them over and over again, frame by frame. We'd show them where the initial damage occurred to our parachute. Where the holes propagated and then wait for their initial comments."

Invariably, the SCOPE contributors were somewhat appalled by the seemingly arbitrary nature of the LDSD parachute deployment. One of SCOPE's most seasoned participants declared it the worst parachute deployment he had ever seen. Clark listened to their assessments and then went back to take a second look at the old footage from the 60s and 70s.

"Because the movies of the early tests are so low in resolution they are hard to interpret, but knowing what to look for made all the difference," said Clark. "Suddenly, people are seeing problems in the deployment, problems in the suspension lines, and parachute envelopes opening on one side and deflating on another, and billowing and vibrating so violently you're sure they are about to rip themselves apart."

Watching the grainy footage, the SCOPE members began to realize that the problems LDSD's supersonic chute encountered have been around for decades, they just didn't have the tools to see it. With a much greater appreciation for challenges involved with parachute inflations that are described with Mach numbers, the council offered up two major recommendations.

"One, that we needed to do everything to make the parachute's supersonic inflation look a lot less like what they saw in our first test flight," said Clark. "Two, they said, 'we know you can't do much to mitigate number one so make the parachute as robust to these phenomena as possible.'"

The LDSD team has a new formula for this year's chute. They made it stronger and put more curve into its crown to help it survive that first shock of supersonic wind. Rocket sled testing done this winter at the U.S. Navy's China Lake facility in California seems to bear this out. Two tests equaled two successes. But the real proof, the kind NASA wants before committing to a new technology for future missions to Mars, will be found in the skies over the Pacific at supersonic speeds and 180,000 feet (nearly 55 kilometers) up. The endgame for this summer's test, even its principal investigator admits, is far from certain.

"We think we have it, but it will be the visuals LDSD brings back that will tell the tale," said Clark. "As long as our chute opens to the point where the canopy is fully inflated, and I think we will do that, we will have learned something valuable. After that, it is just take it as it comes. The physics involved is so cutting edge, we learn something profound every time we test."

The launch period for the Low-Density Supersonic Decelerator opens June 2 and lasts for 10 days. Live low-resolution imagery will be simulcast on NASA TV and several NASA websites. But if you want high-resolution views, you'll have to wait for a week or so for all the imagery to be processed. Or else, on the morning after the test, you would have to be on the guest list for a certain shack on a certain pier on the south coast of Kauai.

Current Mars landing techniques date back to NASA's Viking mission, which put two landers on Mars in 1976. That mission's parachute design has been in use ever since -- and was used again in 2012 to deliver the Curiosity rover to Mars. To conduct advanced exploration missions in the future, the spacecraft required will become larger and heavier. LDSD's technology will help enable those important missions.