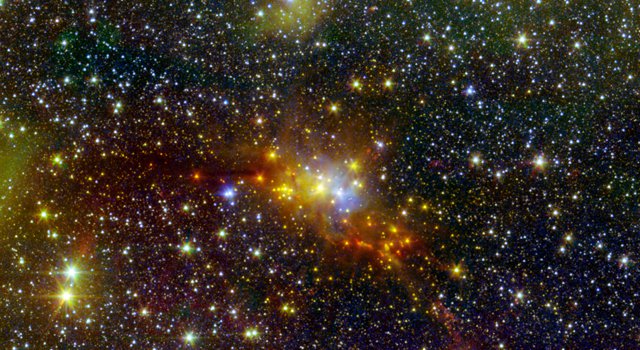 Within the swaddling dust of the Serpens Cloud Core, astronomers are studying one of the youngest collections of stars ever seen in our galaxy.› Full image and caption
Credit: NASA/JPL-Caltech/2MASS

The dark patch of clouds in this image from NASA's Spitzer Space Telescope is swaddled in so much dust, even infrared light is blocked.

Stars that are just beginning to coalesce out of cool swaths of dust and gas are showcased in this image from NASA's Spitzer Space Telescope and the Two Micron All Sky Survey (2MASS). Infrared light has been assigned colors we see with our eyes, revealing young stars in orange and yellow, and a central parcel of gas in blue. This area is hidden in visible-light views, but infrared light can travel through the dust, offering a peek inside the stellar hatchery.

The dark patch to the left of center is swaddled in so much dust, even the infrared light is blocked. It is within these dark wombs that stars are just beginning to take shape.

Called the Serpens Cloud Core, this star-forming region is located about 750 light-years away in Serpens, or the "Serpent," a constellation named after its resemblance to a snake in visible light. The region is noteworthy as it only contains stars of relatively low to moderate mass, and lacks any of the massive and incredibly bright stars found in larger star-forming regions like the Orion nebula. Our sun is a star of moderate mass. Whether it formed in a low-mass stellar region like Serpens, or a high-mass stellar region like Orion, is an ongoing mystery.

The inner Serpens Cloud Core is remarkably detailed in this image. It was assembled from 82 snapshots representing a whopping 16.2 hours of Spitzer observing time. The observations were made during Spitzer's "warm mission," a phase that began in 2009 after the observatory ran out of liquid coolant, as planned.

Most of the small dots in this image are stars located behind, or in front of, the Serpens nebula.

The 2MASS mission was a joint effort between the California Institute of Technology, Pasadena; the University of Massachusetts, Amherst; and NASA's Jet Propulsion Laboratory, also in Pasadena.

JPL manages the Spitzer Space Telescope mission for NASA's Science Mission Directorate, Washington. Science operations are conducted at the Spitzer Science Center at the California Institute of Technology in Pasadena. Spacecraft operations are based at Lockheed Martin Space Systems Company, Littleton, Colorado. Data are archived at the Infrared Science Archive housed at the Infrared Processing and Analysis Center at Caltech. Caltech manages JPL for NASA. For more information about Spitzer, visit: