The Search for Seeds of Black Holes 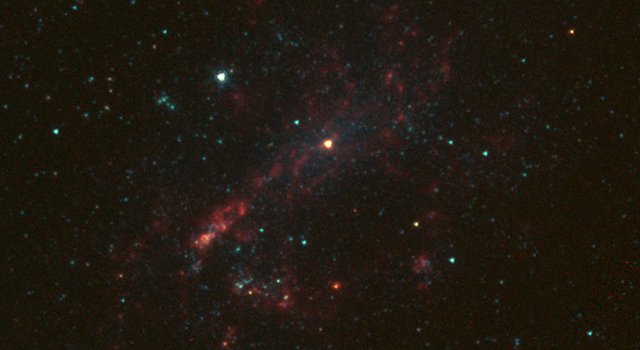 How does one grow supermassive black holes? A new study using data from NASA's Wide-field Infrared Survey Explorer (WISE) has turned up what might be their seeds.

How do you grow a supermassive black hole that is a million to a billion times the mass of our sun? Astronomers do not know the answer, but a new study using data from NASA's Wide-field Infrared Survey Explorer, or WISE, has turned up what might be the cosmic seeds from which a black hole will sprout. The results are helping scientists piece together the evolution of supermassive black holes -- powerful objects that dominate the hearts of all galaxies.

Growing a black hole is not as easy as planting a seed in soil and adding water. The massive objects are dense collections of matter that are literally bottomless pits; anything that falls in will never come out. They come in a range of sizes. The smallest, only a few times greater in mass than our sun, form from exploding stars. The biggest of these dark beasts, billions of times the mass of our sun, grow together with their host galaxies over time, deep in the interiors. But how this process works is an ongoing mystery.

Researchers using WISE addressed this question by looking for black holes in smaller, "dwarf" galaxies. These galaxies have not undergone much change, so they are more pristine than their heavier counterparts. In some ways, they resemble the types of galaxies that might have existed when the universe was young, and thus they offer a glimpse into the nurseries of supermassive black holes.

In this new study, using data of the entire sky taken by WISE in infrared light, up to hundreds of dwarf galaxies have been discovered in which buried black holes may be lurking. Infrared light, the kind that WISE collects, can see through dust, unlike visible light, so it's better able to find the dusty, hidden black holes. The researchers found that the dwarf galaxies' black holes may be about 1,000 to 10,000 times the mass of our sun -- larger than expected for these small galaxies.

"Our findings suggest the original seeds of supermassive black holes are quite massive themselves," said Shobita Satyapal of George Mason University, Fairfax, Va. Satyapal is lead author of a paper published in the March issue of Astrophysical Journal.

Daniel Stern, an astronomer specializing in black holes at NASA's Jet Propulsion Laboratory, Pasadena, Calif., who was not a part of the new study, says the research demonstrates the power of an all-sky survey like WISE to find the rarest black holes. "Though it will take more research to confirm whether the dwarf galaxies are indeed dominated by actively feeding black holes, this is exactly what WISE was designed to do: find interesting objects that stand out from the pack."

The new observations argue against one popular theory of black hole growth, which holds that the objects bulk up in size through galaxy collisions. When our universe was young, galaxies were more likely to crash into others and merge. It is possible the galaxies' black holes merged too, accumulating more mass. In this scenario, supermassive black holes grow in size through a series of galaxy mergers.

The discovery of dwarf galaxy black holes that are bigger than expected suggests that galaxy mergers are not necessary to create big black holes. Dwarf galaxies don't have a history of galactic smash-ups, and yet their black holes are already relatively big.

Instead, supermassive black holes might form very early in the history of the universe. Or, they might grow harmoniously with their host galaxies, feeding off surrounding gas.

"We still don't know how the monstrous black holes that reside in galaxy centers formed," said Satyapal. "But finding big black holes in tiny galaxies shows us that big black holes must somehow have been created in the early universe, before galaxies collided with other galaxies."

Other authors of the study include: N.J. Secrest, W. McAlpine and J.L. Rosenberg of George Mason University; S.L. Ellison of the University of Victoria, Canada; and J. Fischer of the Naval Research Laboratory, Washington.

NASA's Jet Propulsion Laboratory, Pasadena, Calif., manages and operates the NEOWISE mission for NASA's Science Mission Directorate. The WISE mission was selected competitively under NASA's Explorers Program managed by the agency's Goddard Space Flight Center in Greenbelt, Md. The science instrument was built by the Space Dynamics Laboratory in Logan, Utah. The spacecraft was built by Ball Aerospace & Technologies Corp. in Boulder, Colo. Science operations and data processing take place at the Infrared Processing and Analysis Center at the California Institute of Technology in Pasadena. Caltech manages JPL for NASA.

More information on WISE and NEOWISE can be found online at: