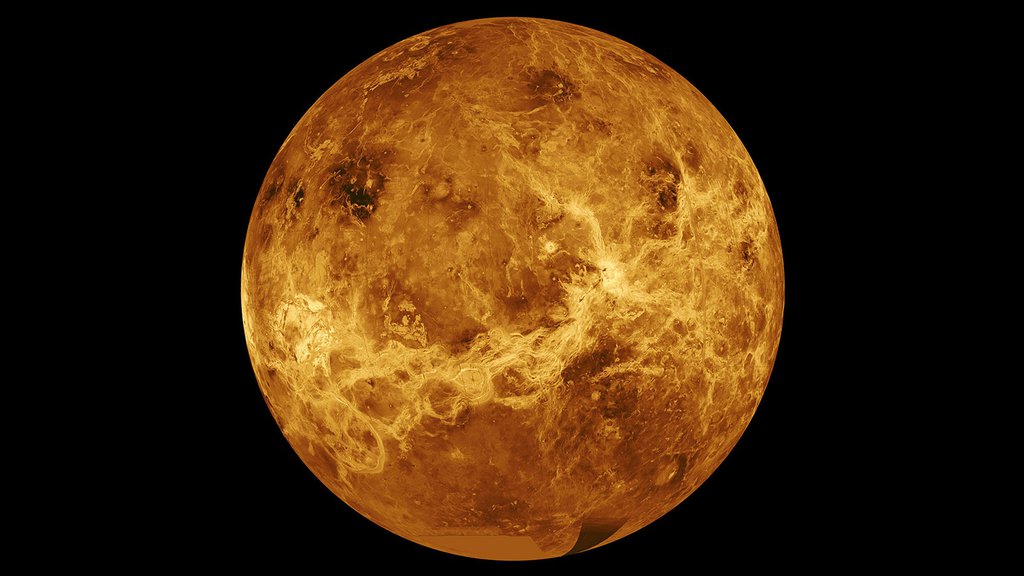 Venus hides a wealth of information that could help us better understand Earth and exoplanets. NASA's JPL is designing mission concepts to survive the planet's extreme temperatures and atmospheric pressure. This image is a composite of data from NASA's Magellan spacecraft and Pioneer Venus Orbiter.
Credit: NASA/JPL-Caltech 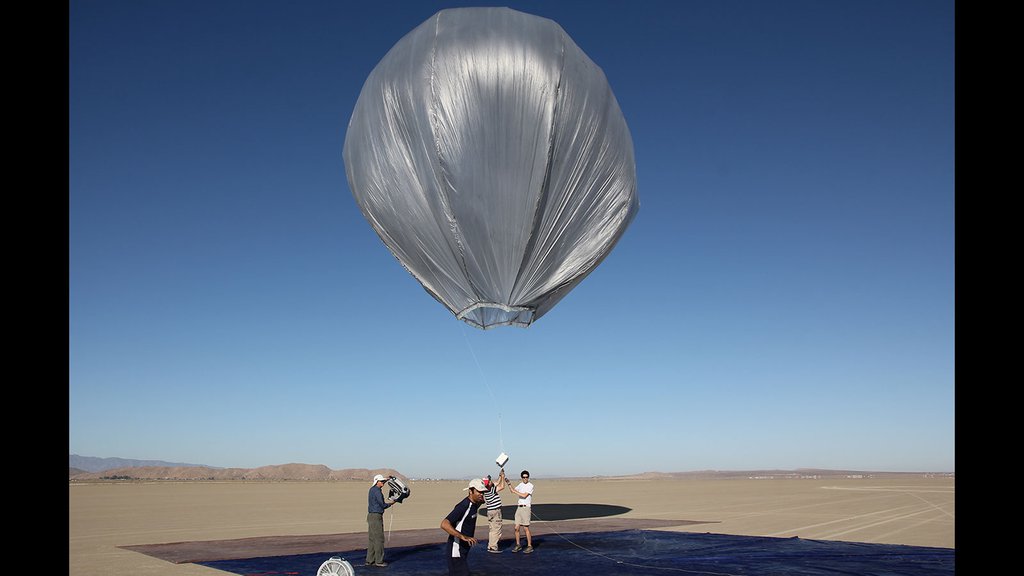 A team of JPL engineers tests whether a large balloon can measure earthquakes from the air. The team proposes to measure "venusqakes" from the temperate upper atmosphere of Venus, using an armada of balloons.
Credit: NASA/JPL-Caltech 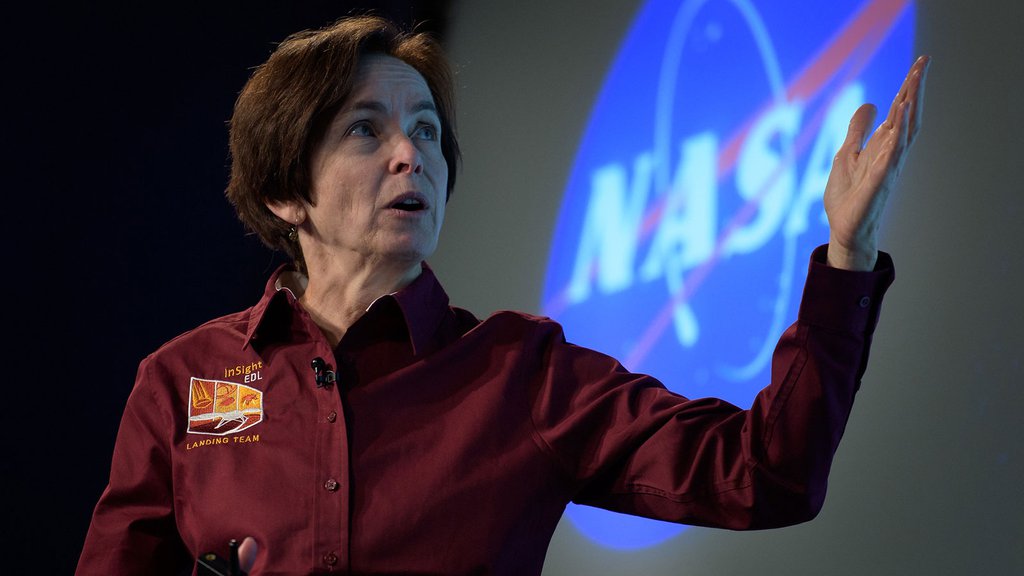 Sue Smrekar, seen here at the 2018 media briefing before the landing of NASA's Mars InSight, is a planetary scientist at NASA's Jet Propulsion Laboratory. She believes exploring Venus will reveal important details about how rocky planets form and whether other planets are capable of supporting life.
Credit: NASA/JPL-Caltech

Why NASA scientists want to go (back) to this most inhospitable planet.

Sue Smrekar really wants to go back to Venus. In her office at NASA's Jet Propulsion Laboratory in Pasadena, California, the planetary scientist displays a 30-year-old image of Venus' surface taken by the Magellan spacecraft, a reminder of how much time has passed since an American mission orbited the planet. The image reveals a hellish landscape: a young surface with more volcanoes than any other body in the solar system, gigantic rifts, towering mountain belts and temperatures hot enough to melt lead.

Now superheated by greenhouse gases, Venus' climate was once more similar to Earth's, with a shallow ocean's worth of water. It may even have subduction zones like Earth, areas where the planet's crust sinks back into rock closer to the core of the planet.

"Venus is like the control case for Earth," said Smrekar. "We believe they started out with the same composition, the same water and carbon dioxide. And they've gone down two completely different paths. So why? What are the key forces responsible for the differences?"

By studying this mysterious planet, scientists could learn a great deal more about exoplanets, as well as the past, present, and possible future of our own. This video unveils this world and calls on current and future scientists to explore its many features.

Smrekar works with the Venus Exploration Analysis Group (VEXAG), a coalition of scientists and engineers investigating ways to revisit the planet that Magellan mapped so many decades ago. Though their approaches vary, the group agrees that Venus could tell us something vitally important about our planet: what happened to the superheated climate of our planetary twin, and what does it mean for life on Earth?

Venus isn't the closest planet to the Sun, but it is the hottest in our solar system. Between the intense heat (900 degrees Fahrenheit heat, or 480 degrees Celsius), the corrosive sulfuric clouds and a crushing atmosphere that is 90 times denser than Earth's, landing a spacecraft there is incredibly challenging. Of the nine Soviet probes that achieved the feat, none lasted longer than 127 minutes.

From the relative safety of space, an orbiter could use radar and near-infrared spectroscopy to peer beneath the cloud layers, measure landscape changes over time, and determine whether or not the ground moves. It could look for indicators of past water as well as volcanic activity and other forces that may have shaped the planet.

Smrekar, who is working on an orbiter proposal called VERITAS, doesn't think that Venus has plate tectonics the way Earth does. But she sees possible hints of subduction - what happens when two plates converge and one slides beneath the other. More data would help.

"We know very little about the composition of the surface of Venus," she said. "We think that there are continents, like on Earth, which could have formed via past subduction. But we don't have the information to really say that."

The answers wouldn't only deepen our understanding of why Venus and Earth are now so different; they could narrow down the conditions scientists would need in order to find an Earth-like planet elsewhere.

Orbiters aren't the only means of studying Venus from above. JPL engineers Attila Komjathy and Siddharth Krishnamoorthy imagine an armada of hot air balloons that ride the gale-force winds in the upper levels of the Venusian atmosphere, where the temperatures are close to Earth's.

"There is no commissioned mission for a balloon at Venus yet, but balloons are a great way to explore Venus because the atmosphere is so thick and the surface is so harsh," said Krishnamoorthy. "The balloon is like the sweet spot, where you're close enough to get a lot of important stuff out but you're also in a much more benign environment where your sensors can actually last long enough to give you something meaningful."

The team would equip the balloons with seismometers sensitive enough to detect quakes on the planet below. On Earth, when the ground shakes, that motion ripples into the atmosphere as waves of infrasound (the opposite of ultrasound). Krishnamoorthy and Komjathy have demonstrated the technique is feasible using silver hot-air balloons, which measured weak signals above areas on Earth with tremors. And that's not even with the benefit of Venus's dense atmosphere, where the experiment would likely return even stronger results.

"If the ground moves a little bit, it shakes the air a lot more on Venus than it does on Earth," Krishnamoorthy explained.

To get that seismic data, though, a balloon mission would need to contend with Venus' hurricane-force winds. The ideal balloon, as determined by Venus Exploration Analysis Group, could control its movements in at least one direction. Krishnamoorthy and Komjathy's team hasn't gotten that far, but they have proposed a middle ground: having the balloons essentially ride the wind around the planet at a steady speed, sending their results back to an orbiter. It's a start.

Among the many challenges facing a Venus lander are those Sun-blocking clouds: Without sunlight, solar-power would be severely limited. But the planet is too hot for other power sources to survive. "Temperature-wise, it's like being in your kitchen oven set to self-cleaning mode," said JPL engineer Jeff Hall, who has worked on balloon and lander prototypes for Venus. "There really is nowhere else like that surface environment in the solar system."

By default, a landing mission's lifespan will be cut short by the spacecraft's electronics starting to fail after a few hours. Hall says the amount of power required to run a refrigerator capable of protecting a spacecraft would require more batteries than a lander could carry.

"There is no hope of refrigerating a lander to keep it cool," he added. "All you can do is slow down the rate at which is destroys itself."

NASA is interested in developing "hot technology" that can survive days, or even weeks, in extreme environments. Although Hall's Venus lander concept didn't make it to the next stage of the approval process, it did lead to his current Venus-related work: a heat-resistant drilling and sampling system that could take Venusian soil samples for analysis. Hall works with Honeybee Robotics to develop the next-generation electric motors that power drills in extreme conditions, while JPL engineer Joe Melko designs the pneumatic sampling system.

Together, they work with the prototypes in JPL's steel-walled Large Venus Test Chamber, which mimics the conditions of the planet right down to an atmosphere that's a suffocating 100% carbon dioxide. With each successful test, the teams bring humanity one step closer to pushing the boundaries of exploration on this most inhospitable planet.

For more information about Venus, visit: