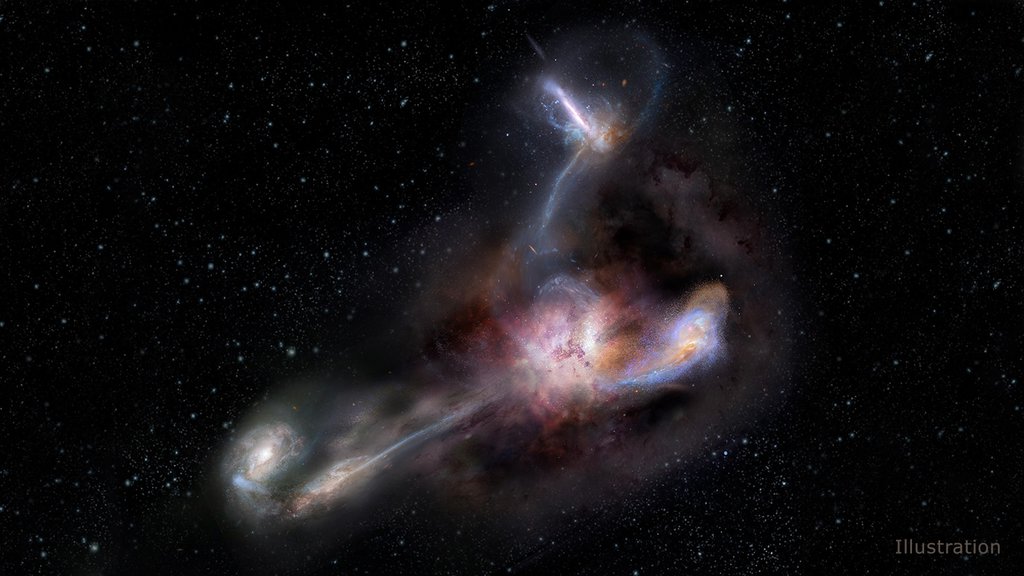 This artist's impression shows galaxy WISE J224607.55-052634.9, the most luminous galaxy ever discovered. A new study using data from the Atacama Large Millimeter/submillimeter Array (ALMA) shows that this galaxy is syphoning dust and other material from three of its smaller galactic neighbors. (NRAO/AUI/NSF) S. Dagnello › Full image and caption

The most luminous galaxy ever discovered is cannibalizing not one, not two, but at least three smaller galaxies, which could explain its extreme brightness.

The most luminous galaxy ever discovered is cannibalizing not one, not two, but at least three of its smaller neighbors, according to a new study published today (Nov. 15) in the journal Science and coauthored by scientists from NASA's Jet Propulsion Laboratory in Pasadena, California. The material that the galaxy is stealing from its neighbors is likely contributing to its uber-brightness, the study shows.

New observations using the Atacama Large Millimeter/submillimeter Array (ALMA) in Chile reveal distinct trails of dust being pulled from three smaller galaxies into W2246-0526. The trails contain about as much material as the smaller galaxies themselves, and it's unclear whether those galaxies will escape their current fate or will be completely consumed by their luminous neighbor. 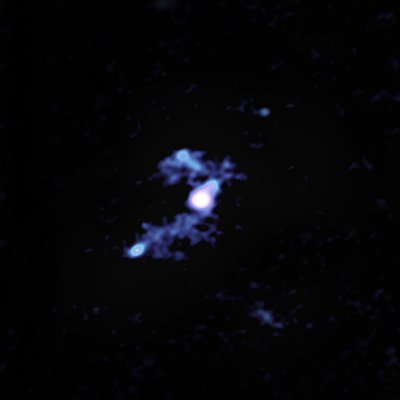 This image, created using radio data from the Atacama Large Millimeter/submillimeter Array (ALMA), shows W2246-0526 as it syphons material away from three smaller galaxies. W2246-0526 and one of its companions are in the center; the second galaxy is above them; the third is to the lower left. Image Credit: ALMA (ESO/NAOJ/NRAO); S. Dagnello (NRAO/AUI/NSF)
Larger view

Most of W2246-0526's record-breaking luminosity comes not only from stars, but also a collection of hot gas and dust concentrated around the center of the galaxy. At the heart of this cloud is a supermassive black hole, recently determined to be 4 billion times more massive than the Sun. In the intense gravity, matter falls toward the black hole at high speeds, crashing together and heating up to millions of degrees, causing the material to shine with incredible brilliance. Galaxies that contain these types of luminous, black-hole-fueled structures are known as quasars.

Like any engine on Earth, W2246-0526's enormous energy output requires an equally high fuel input. In this case, that means gas and dust to form stars and to replenish the cloud around the central black hole. The new study shows that the amount of material being accreted by WJ2246-0526 from its neighbors is enough to replenish what is being consumed, thereby sustaining the galaxy's tremendous luminosity.

"It is possible that this feeding frenzy has already been ongoing for some time, and we expect the galactic feast to continue for at least a few hundred million years," said Tanio Diaz-Santos of the Universidad Diego Portales in Santiago, Chile, lead author of the study.

In the new study, the scientists used images from ALMA - a collection of individual radio antennas that work together as single telescope - to identify the dusty trails of material. The position of the accretion trails strongly suggests they contain material flowing between W2246-0526 and the other galaxies. In addition, the trails exhibit the right morphology - that is, the shape of the trails is consistent with how the material should flow if it is being pulled from one galaxy into another.

This kind of galactic cannibalism is not uncommon. Astronomers have previously observed galaxies merging with or accreting matter from their neighbors in the nearby universe. For example, the pair of galaxies collectively known as "the Mice" are so named because each has a long, thin tail of accreting material stretching away from it.

W2246-0526 is the most distant galaxy ever found to be accreting material from multiple sources. The light from W2246-0526 took 12.4 billion years to reach us, so astronomers are seeing the object as it was when our universe was only a tenth of its present age of 13.8 billion years. At that distance, the streams of material falling into W2246-0526 are particularly faint and difficult to detect. The study relies on 2.5 hours of observation time using 40 of ALMA's 12-meter radio dishes.

"We knew from previous data that there were three companion galaxies, but there was no evidence of interactions between these neighbors and the central source," said Diaz-Santos. "We weren't looking for cannibalistic behavior and weren't expecting it, but this deep dive with the ALMA observatory makes it very clear."

W2246-0526 falls into a special category of particularly luminous quasars known as hot, dust-obscured galaxies, or Hot DOGs. Astronomers think that most quasars get some of their fuel from external sources. One possibility is that these objects receive a slow trickle of material from the space between galaxies. Another is that they feed in bursts by eating up other galaxies, which appears to be occurring with W2246-0526. It's unclear whether W2246-0526 is representative of other obscured quasars (those with their central engines obscured by thick clouds of dust) or if it is a special case.

"This galaxy may be one of a kind, because it's nearly twice as luminous as any other galaxy we've found with WISE and it formed very early in the universe's history," said Peter Eisenhardt, JPL project scientist for WISE and a coauthor on the new paper. "But we've discovered many other galaxies with WISE that are similar to this one: distant, dusty and thousands of times more luminous than typical galaxies are today. So with W2246-0526, we may be seeing what goes on during a key stage in the evolution of galaxies and obscured quasars."

Ultimately, the galaxy's gluttony may only lead to self-destruction. Scientists hypothesize that obscured quasars that gather too much material around them end up vomiting gas and dust back out through the galaxy. This onslaught of material halts the formation of new stars, essentially pushing the galaxy into retirement while other galaxies continue to renew themselves with the birth of new stars.

A companion study about W2246-0526, published on Nov. 14 in the Astrophysical Journal, provided the mass measurement for the supermassive black hole at the galaxy's center - 4 billion times the mass of the Sun. This mass is large, but the extreme luminosity of W2246-0526 was thought to require a supermassive black hole with a mass at least three times larger, according to the paper authors. Solving this apparent contradiction will require more observations.