The Moon Is Rusting, and Researchers Want to Know Why 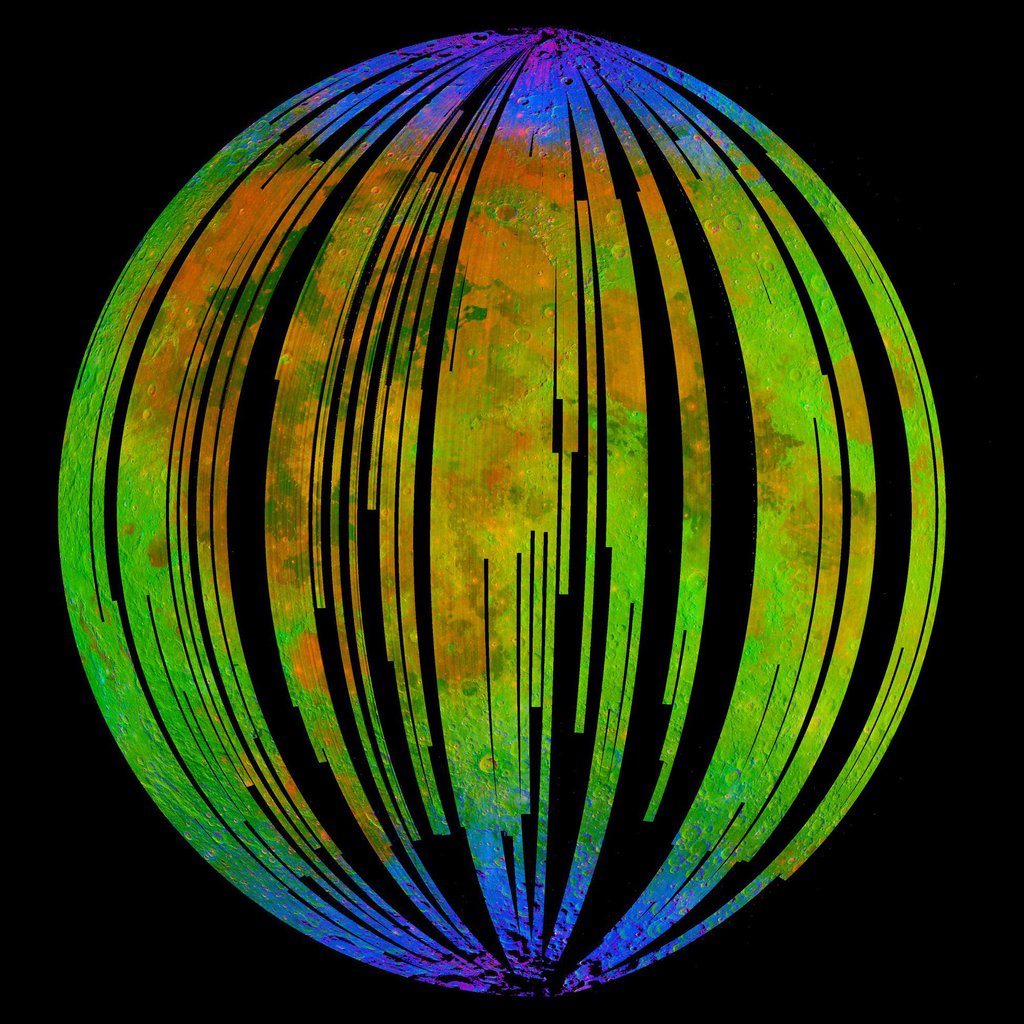 This image of the moon is from NASA's Moon Mineralogy Mapper on the Indian Space Research Organization's Chandrayaan-1 mission. It is a three-color composite of reflected near-infrared radiation from the sun.
Credit: ISRO/NASA/JPL-Caltech/Brown Univ./USGS
Full Image Details

While our Moon is airless, research indicates the presence of hematite, a form of rust that normally requires oxygen and water. That has scientists puzzled.

Mars has long been known for its rust. Iron on its surface, combined with water and oxygen from the ancient past, give the Red Planet its hue. But scientists were recently surprised to find evidence that our airless Moon has rust on it as well.

A new paper in Science Advances reviews data from the Indian Space Research Organization's Chandrayaan-1 orbiter, which discovered water ice and mapped out a variety of minerals while surveying the Moon's surface in 2008. Lead author Shuai Li of the University of Hawaii has studied that water extensively in data from Chandrayaan-1's Moon Mineralogy Mapper instrument, or M3, which was built by NASA's Jet Propulsion Laboratory in Southern California. Water interacts with rock to produce a diversity of minerals, and M3 detected spectra - or light reflected off surfaces - that revealed the Moon's poles had a very different composition than the rest of it.

Intrigued, Li homed in on these polar spectra. While the Moon's surface is littered with iron-rich rocks, he nevertheless was surprised to find a close match with the spectral signature of hematite. The mineral is a form of iron oxide, or rust, produced when iron is exposed to oxygen and water. But the Moon isn't supposed to have oxygen or liquid water, so how can it be rusting?

The mystery starts with the solar wind, a stream of charged particles that flows out from the Sun, bombarding Earth and the Moon with hydrogen. Hydrogen makes it harder for hematite to form. It's what is known as a reducer, meaning it adds electrons to the materials it interacts with. That's the opposite of what is needed to make hematite: For iron to rust, it requires an oxidizer, which removes electrons. And while the Earth has a magnetic field shielding it from this hydrogen, the Moon does not.

"It's very puzzling," Li said. "The Moon is a terrible environment for hematite to form in." So he turned to JPL scientists Abigail Fraeman and Vivian Sun to help poke at M3's data and confirm his discovery of hematite.

"At first, I totally didn't believe it. It shouldn't exist based on the conditions present on the Moon," Fraeman said. "But since we discovered water on the Moon, people have been speculating that there could be a greater variety of minerals than we realize if that water had reacted with rocks."

After taking a close look, Fraeman and Sun became convinced M3's data does indeed indicate the presence of hematite at the lunar poles. "In the end, the spectra were convincingly hematite-bearing, and there needed to be an explanation for why it's on the Moon," Sun said.

Their paper offers a three-pronged model to explain how rust might form in such an environment. For starters, while the Moon lacks an atmosphere, it is in fact home to trace amounts of oxygen. The source of that oxygen: our planet. Earth's magnetic field trails behind the planet like a windsock. In 2007, Japan's Kaguya orbiter discovered that oxygen from Earth's upper atmosphere can hitch a ride on this trailing magnetotail, as it's officially known, traveling the 239,000 miles (385,00 kilometers) to the Moon.

That discovery fits with data from M3, which found more hematite on the Moon's Earth-facing near side than on its far side. "This suggested that Earth's oxygen could be driving the formation of hematite," Li said. The Moon has been inching away from Earth for billions of years, so it's also possible that more oxygen hopped across this rift when the two were closer in the ancient past.

Then there's the matter of all that hydrogen being delivered by the solar wind. As a reducer, hydrogen should prevent oxidation from occurring. But Earth's magnetotail has a mediating effect. Besides ferrying oxygen to the Moon from our home planet, it also blocks over 99% of the solar wind during certain periods of the Moon's orbit (specifically, whenever it's in the full Moon phase). That opens occasional windows during the lunar cycle when rust can form.

The third piece of the puzzle is water. While most of the Moon is bone dry, water ice can be found in shadowed lunar craters on the Moon's far side. But the hematite was detected far from that ice. The paper instead focuses on water molecules found in the lunar surface. Li proposes that fast-moving dust particles that regularly pelt the Moon could release these surface-borne water molecules, mixing them with iron in the lunar soil. Heat from these impacts could increase the oxidation rate; the dust particles themselves may also be carrying water molecules, implanting them into the surface so that they mix with iron. During just the right moments - namely, when the Moon is shielded from the solar wind and oxygen is present - a rust-inducing chemical reaction could occur.

More data is needed to determine exactly how the water is interacting with rock. That data could also help explain another mystery: why smaller quantities of hematite are also forming on the far side of the Moon, where the Earth's oxygen shouldn't be able to reach it.

Fraeman said this model may also explain hematite found on other airless bodies like asteroids. "It could be that little bits of water and the impact of dust particles are allowing iron in these bodies to rust," she said.

Li noted that it's an exciting time for lunar science. Almost 50 years since the last Apollo landing, the Moon is a major destination again. NASA plans to send dozens of new instruments and technology experiments to study the Moon beginning next year, followed by human missions beginning in 2024 all as part of the Artemis program.

JPL is also building a new version of M3 for an orbiter called Lunar Trailblazer. One of its instruments, the High-resolution Volatiles and Minerals Moon Mapper (HVM3), will be mapping water ice in permanently shadowed craters on the Moon, and may be able to reveal new details about hematite as well.

"I think these results indicate that there are more complex chemical processes happening in our solar system than have been previously recognized," Sun said. "We can understand them better by sending future missions to the Moon to test these hypotheses."