The History of Johannes Kepler 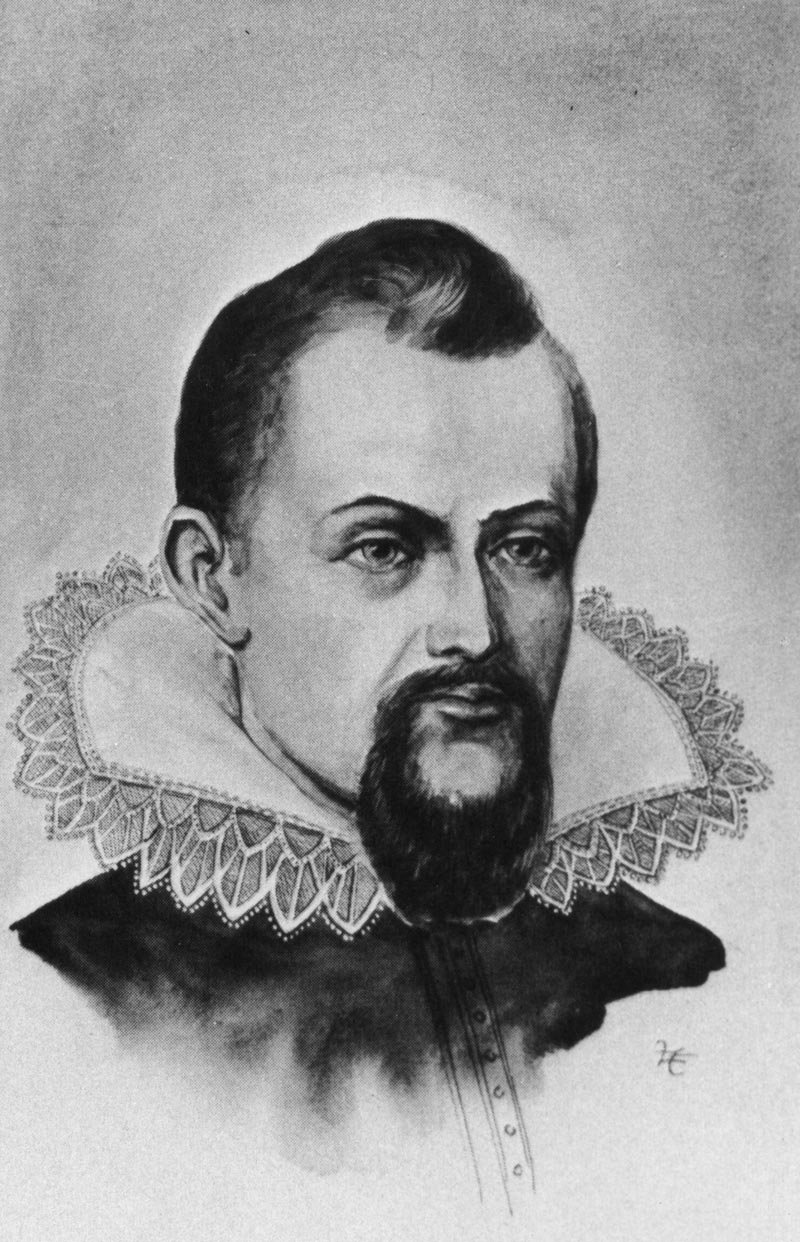 Johannes Kepler (1571-1630) German Astronomer best known for the laws of planetary motion. Kepler documented the explosion of a supernova in 1604, which was the last such event observed in our Milky Way galaxy and would later be known as "Kepler's supernova." Courtesy of the Archives, California Institute of Technology 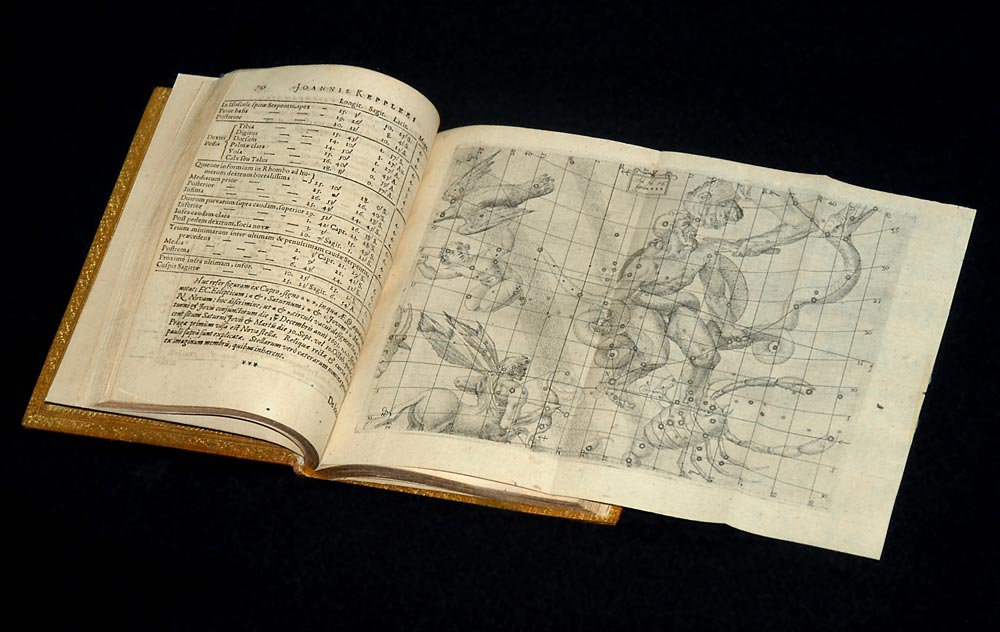 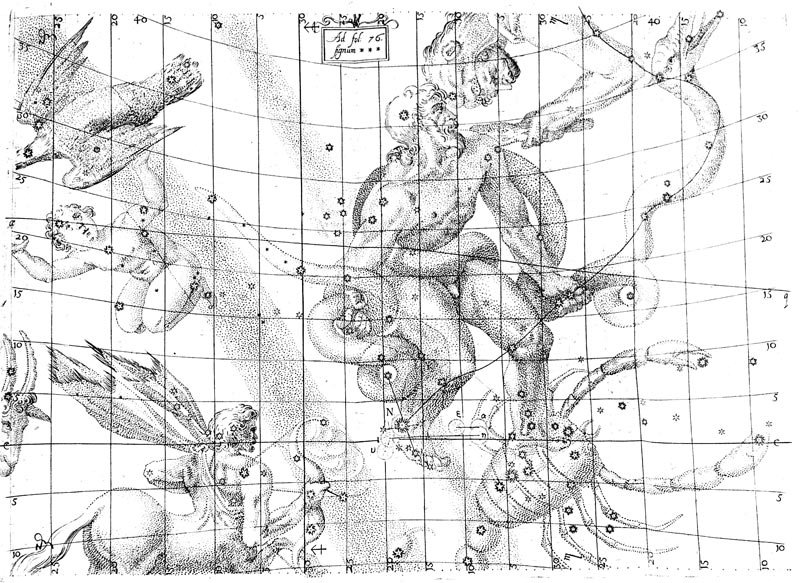 An illustration in the book, locates Kepler's supernova in the foot of the Ophiuchus constellation. Courtesy of the Archives, California Institute of Technology 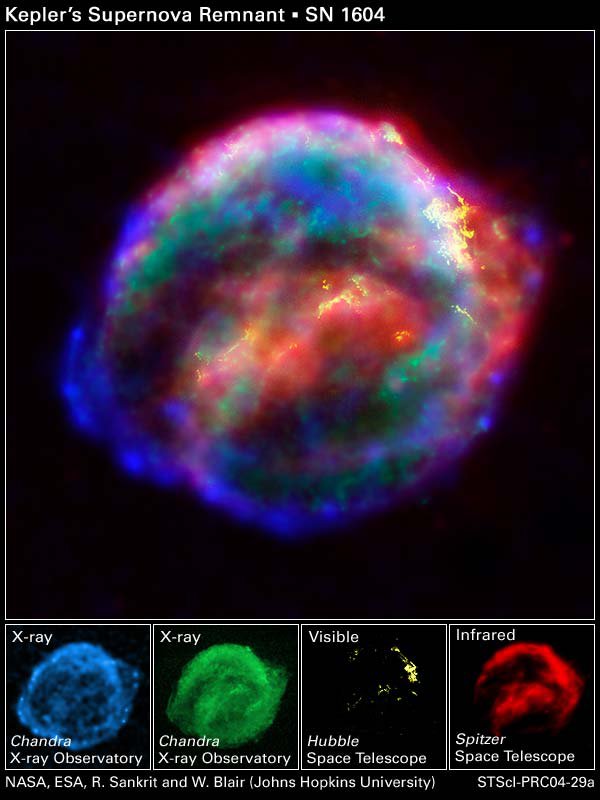 Each color in this image represents a different region of the electromagnetic spectrum, from X-rays to infrared light. These diverse colors are shown in the panel of photographs below the composite image in the browse version.

As a rather frail young man, the exceptionally talented Kepler turned to mathematics and the study of the heavens early on. When he was six, his mother pointed out a comet visible in the night sky. When Kepler was nine, his father took him out one night under the stars to observe a lunar eclipse. These events both made a vivid impression on Kepler's youthful mind and turned him toward a life oriented to the study of astronomy.

Kepler used simple mathematics to formulate three laws of planetary motion. Kepler's First Law stated that planets move in elliptical paths around the Sun. He also discovered that planets move proportionally faster in their orbits when they are closer to the Sun; this became Kepler's Second Law. Finally, Kepler's Third Law explained the relationship between the distance of a planet from the Sun and the amount of time it took to orbit the Sun. Together these laws of celestial mechanics revolutionized astronomy.

"The era in which Kepler lived was one of tremendous upheaval and change," said Dr. Dan Lewis, curator of the history of science and technology at the Huntington Library in San Marino, Calif. "Religious leaders were reluctant to relinquish their ideas about the heavens. Talk by astronomers of a sky filled with objects moving in non-circular orbits and other phenomena that went against an Earth-centric model threatened their beliefs. As a result, Kepler and his first wife, Barbara, created a code with which to write letters to each other so that their correspondence would not put them at risk of persecution."

Near the end of the sixteenth century, Kepler apprenticed himself to the astronomical observer Tycho Brahe, who had an observatory on the island of Hven in Denmark. The somewhat eccentric Tycho, who had lost a portion of his nose in a duel and replaced the tip of it with a contraption made of gold and silver, was nevertheless a brilliant astronomer. Kepler absorbed a great deal of information from his time working for Brahe, and based much of his later calculations on Tycho's observations. In 1604, Kepler saw the last supernova observed in our Milky Way galaxy, which he documented two years later in his book De Stella Nova, published in Prague in 1606. The explosion of the dying star was initially as bright as Mars and could be seen with the naked eye. This was indeed good fortune, for the telescope would not be invented for another five years.

Several observers spotted the supernova on Oct. 9, 1604. Kepler didn't see it until Oct. 17, due to cloudy skies in his part of the world. But he studied the event so extensively that it was named after him. The Kepler supernova is now a remnant. But it is still studied by astronomers, including those of NASA's three Great Observatories: the Spitzer Space Telescope, Hubble Space Telescope and Chandra X-ray Observatory. The three observatories use infrared light, visible light, and X-rays, respectively.

Kepler was deeply driven by a desire to understand the analytical "why" of astronomy, well beyond the descriptive "what" of his predecessors Ptolemy and Tycho. He was also guided by a notion of beauty in the structure of the universe. In his words, "Happy is the man who devotes himself to the study of the heavens; their study will furnish him with the pursuit of enjoyments."
+ Related news release
+ Scorpius Constellation Animation
+ Composite view of supernova split + Stars & Galaxies wallpapers + Spitzer home page
+ Stars & Galaxies wallpapers
+ Spitzer home page