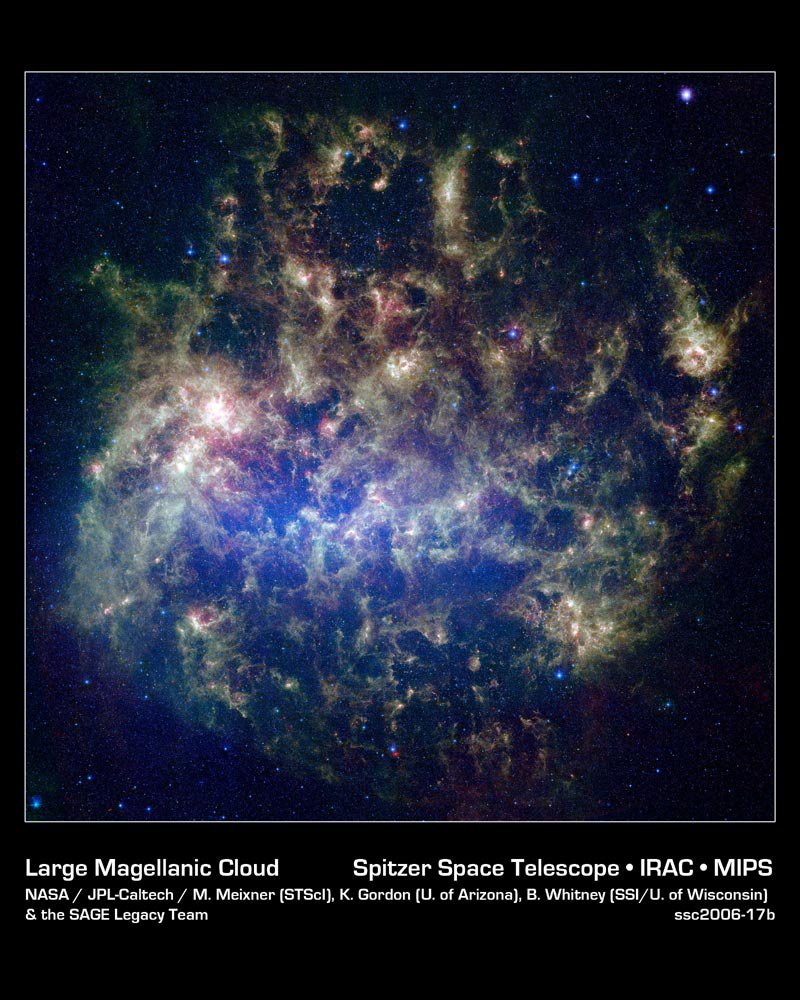 Spitzer's infrared view of the Large Magellanic Cloud. The blue color, seen most prominently in the central bar, represents starlight from older stars. The chaotic, bright regions outside this bar are filled with hot, massive stars buried in thick blankets of dust. The red color around these bright regions is from dust heated by stars, while the red dots scattered throughout the picture are either dusty, old stars or more distant galaxies. The greenish clouds contain cooler interstellar gas and molecular-sized dust grains illuminated by ambient starlight.
Credit: NASA/JPL-Caltech/STScI

A new image from NASA's Spitzer Space Telescope is helping astronomers understand how stardust is recycled in galaxies.

A new image from NASA's Spitzer Space Telescope is helping astronomers understand how stardust is recycled in galaxies.

The cosmic portrait shows the Large Magellanic Cloud, a nearby dwarf galaxy named after Ferdinand Magellan, the seafaring explorer who observed the murky object at night during his fleet's historic journey around Earth. Now, nearly 500 years after Magellan's voyage, astronomers are studying Spitzer's view of this galaxy to learn more about the circular journey of stardust, from stars to space and back again.

"The Large Magellanic Cloud is like an open book," said Dr. Margaret Meixner of the Space Telescope Science Institute, Baltimore, Md. "We can see the entire lifecycle of matter in a galaxy in this one snapshot." Meixner is lead author of a paper on the findings to appear in the November 2006 issue of the Astronomical Journal.

The vibrant false-color image, a mosaic of approximately 300,000 individual frames, shows a central blue sea of stars amidst lots of colorful, choppy waves of dust. It can be viewed at: http://www.spitzer.caltech.edu/Media/releases/ssc2006-17/ssc2006-17b.shtml .

Space dust is important for making stars, planets and even people. The tiny particles -- flecks of minerals, ices and carbon-rich molecules -- are everywhere in the universe. Developing stars and solar systems are constantly consuming dust, while older stars shed dust back into space, where it will one day provide the ingredients for new generations of stars.

Spitzer, an infrared observatory orbiting the sun, is extremely sensitive to the infrared glow of dust that arises when stars heat it up. The observatory's unprecedented view of the Large Magellanic Cloud offers a unique look at three stops on the eternal ride of dust through a galaxy: in collapsing envelopes around young stars; scattered about in the space between stars; and in expelled shells of material from old stars.

"The Spitzer observations of the Large Magellanic Cloud are giving us the most detailed look yet at how this feedback process works in an entire galaxy," said Meixner. "We can quantify how much dust is being consumed and ejected by stars."

In addition to dust, Spitzer's view reveals nearly one million never-before-seen objects, most of which are stars in the Large Magellanic Cloud. The hidden stars, both young and old, are embedded in layers of dust that block visible starlight but shine in infrared.

"We can now see the populations of old stars and stars that are currently forming," said co-author Dr. Karl Gordon of the University of Arizona, Tucson.

The Large Magellanic Cloud is one of a handful of dwarf galaxies that orbit our own Milky Way. It is located near the southern constellation Dorado, about 160,000 light-years from Earth. About one-third of the whole galaxy can be seen in the Spitzer image.

Astronomers believe that approximately six billion years ago, not long before our solar system formed, this dwarf galaxy was shaken up via a close encounter with the Milky Way. The resulting chaos triggered bursts of massive star formation similar to what is thought to occur in more primitive galaxies billions of light-years away. This and other distant-galaxy traits, such as an irregular shape and low abundance of metals, make the Large Magellanic Cloud the perfect nearby target for studying the faraway universe.

This research is part of a Spitzer Legacy program called Surveying the Agents of a Galaxy's Evolution, also known as Sage. The international Sage team includes more than 50 astronomers spread over the globe from Japan to the United States. The main data centers are located at: the Space Telescope Science Institute, Baltimore, Md., led by Meixner; University of Arizona, Tucson, led by Gordon; and University of Wisconsin, Madison, led by Dr. Barbara Whitney.