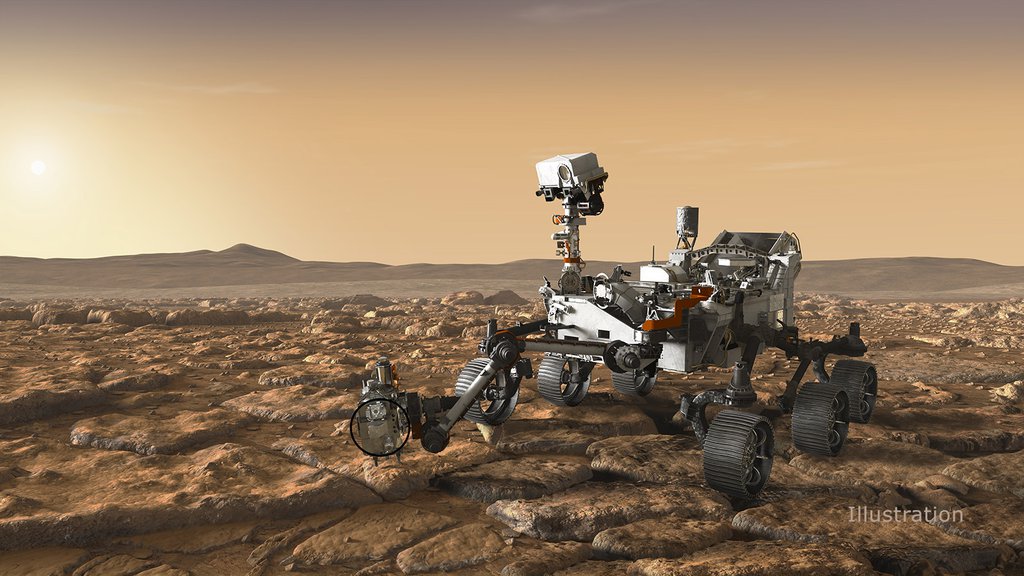 As seen in this artist's concept, the SHERLOC instrument is located on the end of the robotic arm of NASA's Perseverance Mars rover.
Credit: NASA/JPL-Caltech 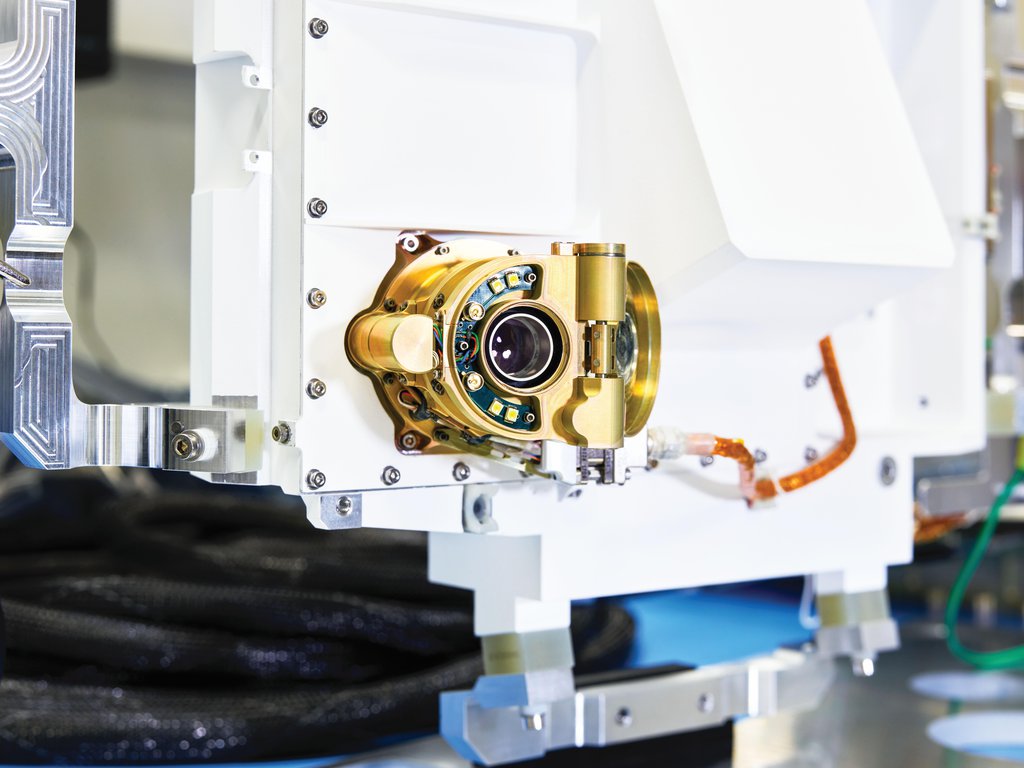 This image shows an engineering model of SHERLOC, one of the instruments onboard NASA's Perseverance Mars rover.
Credit: NASA/JPL-Caltech
Full Image Details 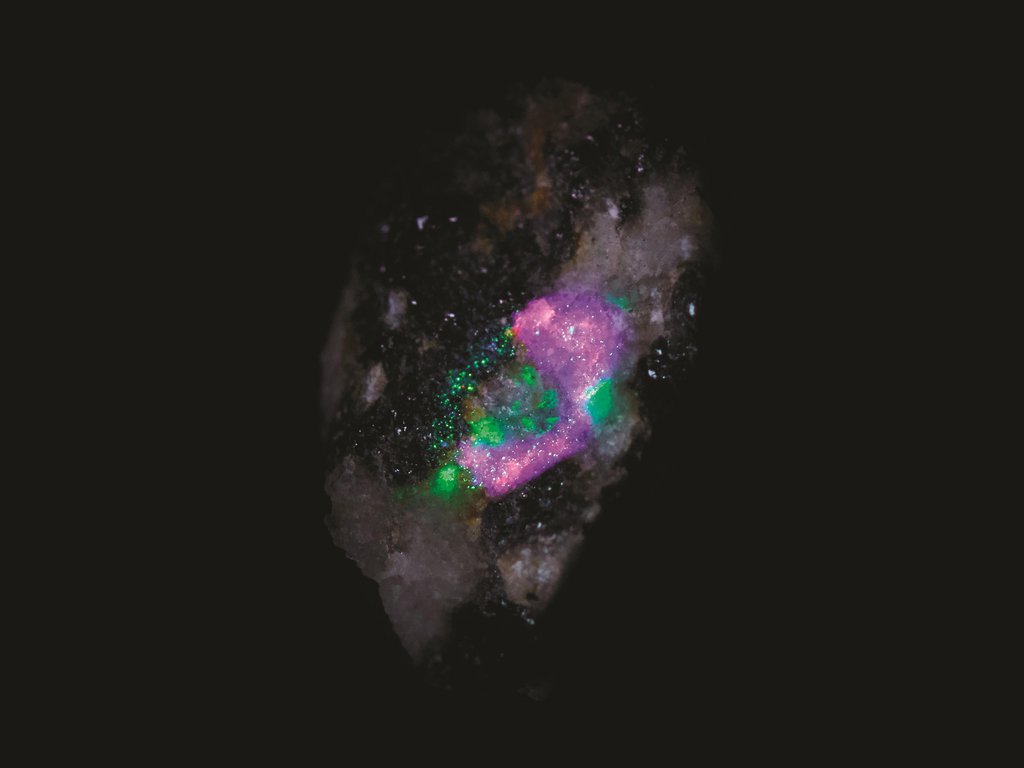 In this test image by SHERLOC, an instrument aboard NASA's Perseverance rover, each color represents a different mineral detected on a rock's surface.
Credit: NASA/JPL-Caltech
Full Image Details

An instrument called SHERLOC will, with the help of its partner WATSON, hunt for signs of ancient life by detecting organic molecules and minerals.

Mars is a long way from 221B Baker Street, but one of fiction's best-known detectives will be represented on the Red Planet after NASA's Perseverance rover touches down on Feb. 18, 2021. SHERLOC, an instrument on the end of the rover's robotic arm, will hunt for sand-grain-sized clues in Martian rocks while working in tandem with WATSON, a camera that will take close-up pictures of rock textures. Together, they will study rock surfaces, mapping out the presence of certain minerals and organic molecules, which are the carbon-based building blocks of life on Earth.

SHERLOC was built at NASA's Jet Propulsion Laboratory in Southern California, which leads the Perseverance mission; WATSON was built at Malin Space Science Systems in San Diego. For the most promising rocks, the Perseverance team will command the rover to take half-inch-wide core samples, store and seal them in metal tubes, and deposit them on the surface of Mars so that a future mission can return them to Earth for more detailed study.

SHERLOC will be working with six other instruments aboard Perseverance to give us a clearer understanding of Mars. It's even helping the effort to create spacesuits that will hold up in the Martian environment when humans set foot on the Red Planet. Here's a closer look.

The Power of Raman

SHERLOC's full name is a mouthful: Scanning Habitable Environments with Raman & Luminescence for Organics & Chemicals. "Raman" refers to Raman spectroscopy, a scientific technique named after the Indian physicist C.V. Raman, who discovered the light-scattering effect in the 1920s.

"While traveling by ship, he was trying to discover why the color of the sea was blue," said Luther Beegle of JPL, SHERLOC's principal investigator. "He realized if you shine a light beam on a surface, it can change the wavelength of scattered light depending on the materials in that surface. "

This effect is called Raman scattering. Scientists can identify different molecules based on the distinctive spectral "fingerprint" visible in their emitted light. An ultraviolet laser that is part of SHERLOC will allow the team to classify organics and minerals present in a rock and understand the environment in which the rock formed. Salty water, for example, can result in the formation of different minerals than fresh water. The team will also be looking for astrobiology clues in the form of organic molecules, which among other things, serve as potential biosignatures, demonstrating the presence life in Mars' ancient past.

"Life is clumpy," Beegle said. "If we see organics clumping together on one part of a rock, it might be a sign that microbes thrived there in the past."

Nonbiological processes can also form organics, so detecting the compounds isn't a sure sign that life formed on Mars. But organics are crucial to understanding whether the ancient environment could have supported life.

When Beegle and his team spot an interesting rock, they'll scan a quarter-sized area of it with SHERLOC's laser to tease out the mineral composition and whether organic compounds are present. Then WATSON (Wide Angle Topographic Sensor for Operations and eNgineering) will take close-up images of the sample. It can snap images of Perseverance, too, just as NASA's Curiosity rover uses the same camera - called the Mars Hand Lens Imager on that vehicle - for science and for taking selfies.

But combined with SHERLOC, WATSON can do even more: The team can precisely map SHERLOC's findings over WATSON's images to help reveal how different mineral layers formed and overlap. They can also combine the mineral maps with data from other instruments - among them, PIXL (Planetary Instrument for X-ray Lithochemistry) on Perseverance's robotic arm - to see whether a rock could hold signs of fossilized microbial life.

Any science instrument exposed to the Martian environment for long enough is bound to change, either from the extreme temperature swings or the radiation from the Sun and cosmic rays. Scientists occasionally have to calibrate these instruments, which they do by measuring their readings against calibration targets - essentially, objects with known properties selected in advance for cross-checking purposes. (For instance, a penny serves as one calibration target aboard Curiosity.) Since they know in advance what the readings should be when an instrument is working correctly, scientists can make adjustments accordingly.

About the size of a smartphone, SHERLOC's calibration target includes 10 objects, including a sample of a Martian meteorite that traveled to Earth and was found in the Oman desert in 1999. Studying how this meteorite fragment changes over the course of the mission will help scientists understand the chemical interactions between the planet's surface and its atmosphere. SuperCam, another instrument aboard Perseverance, has a piece of Martian meteorite on its calibration target as well.

While scientists are returning fragments of Mars back to the surface of the Red Planet to further their studies, they're counting on Perserverance to gather dozens of rock and soil samples for future return to Earth. The samples the rover collects will be exhaustively studied, with data taken from the landscape in which they formed, and they'll include different rock types than the meteorites.

Next to the Martian meteorite are five samples of spacesuit fabric and helmet material developed by NASA's Johnson Space Center. SHERLOC will take readings of these materials as they change in the Martian landscape over time, giving spacesuit designers a better idea of how they degrade. When the first astronauts step on to Mars, they might have SHERLOC to thank for the suits that keep them safe.

Perseverance is a robotic scientist weighing about 2,260 pounds (1,025 kilograms). The rover's astrobiology mission will search for signs of past microbial life. It will characterize the planet's climate and geology, collect samples for future return to Earth, and pave the way for human exploration of the Red Planet. No matter what day Perseverance launches during its July 17-Aug. 11 launch period, it will land at Mars' Jezero Crater on Feb. 18, 2021.