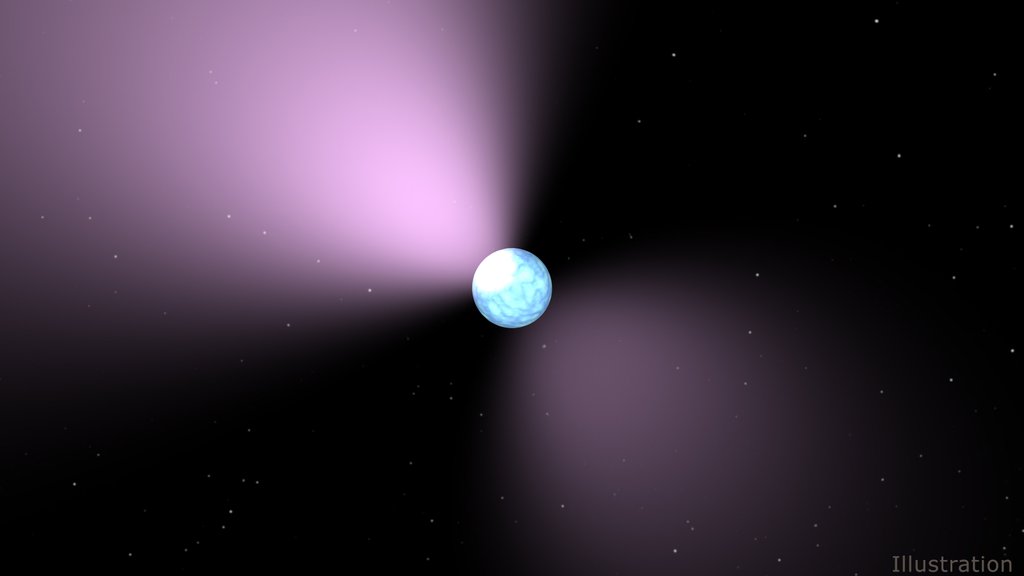 This artist's concept shows a pulsar, which is like a lighthouse, as its light appears in regular pulses as it rotates.› Full image and caption
Credit: NASA/JPL-Caltech

A mysterious neutron star has been caught behaving like two distinct objects -- a radio pulsar and a magnetar -- and could be important to understanding the evolution of these objects.

Like anthropologists piecing together the human family tree, astronomers have found that a misfit "skeleton" of a star may link two different kinds of stellar remains. The mysterious object, called PSR J1119-6127, has been caught behaving like two distinct objects -- a radio pulsar and a magnetar -- and could be important to understanding their evolution.

A radio pulsar is type of a neutron star -- the extremely dense remnant of an exploded star -- that emits radio waves in predictable pulses due to its fast rotation. Magnetars, by contrast, are rabble rousers: They have violent, high-energy outbursts of X-ray and gamma ray light, and their magnetic fields are the strongest known in the universe.

"This neutron star wears two different hats," said Walid Majid, astrophysicist at NASA's Jet Propulsion Laboratory, Pasadena, California. "Sometimes it's a pulsar. Sometimes it's a magnetar. This object may tell us something about the underlying mechanism of pulsars in general."

Since the 1970s, scientists have treated pulsars and magnetars as two distinct populations of objects. But in the last decade, evidence has emerged that these could be stages in the evolution of a single object. Majid's new study, combined with other observations of the object, suggests that J1119 could be in a never-before-seen transition state between radio pulsar and magnetar. The study was published in the Jan. 1 issue of Astrophysical Journal Letters, and was presented this week at the American Astronomical Society meeting in Grapevine, Texas.

"This is the final missing link in the chain that connects pulsars and magnetars," said Victoria Kaspi, astrophysicist at McGill University in Montreal, Canada. "It seems like there's a smooth transition between these two kinds of neutron star behaviors."

When this mysterious object was discovered in 2000, it appeared to be a radio pulsar. It was mostly quiet and predictable until July 2016, when NASA's Fermi and Swift space observatories observed two X-ray bursts and 10 additional bursts of light at lower energies coming from the object, as reported in a study in the Astrophysical Journal Letters led by Ersin Gogus. An additional 2016 study in the same journal, led by Robert Archibald, also looked at the two X-ray bursts, incorporating observations from NASA's NuSTAR (Nuclear Spectroscopic Telescope Array) telescope. This study also suggested that the pulsar was behaving rebelliously -- like a magnetar.

When the outbursts happened, Kaspi excitedly emailed astrophysicist Tom Prince at JPL/Caltech in Pasadena, telling him this would be a good object to study from the southern hemisphere. Prince, Majid and colleagues used the NASA Deep Space Network 70-meter radio telescope in Canberra, Australia -- the largest dish in the southern hemisphere -- to see what was going on.

"We think these X-ray bursts happened because the object's enormous magnetic field got twisted as the object was spinning," Majid said.

The stress of a twisting magnetic field is so great that it causes the outer crust of the neutron star to break -- analogous to tectonic plates on Earth causing earthquakes. This causes an abrupt change in rotation, called a "glitch," which has been measured by NuSTAR.

Neutron stars are so dense that one teaspoon weighs as much as a mountain. The star's crust, roughly 0.6 miles (1 kilometer) thick, with higher pressure and density at greater depths, is a neutron-rich lattice. This particular neutron star is thought to have one of the strongest magnetic fields among the population of known pulsars: a few trillion times stronger than the magnetic field of the sun.

Two weeks after the X-ray outburst, Majid and colleagues tracked the object's emissions at radio frequencies, which are much lower in energy than X-rays. The radio emissions had sharp increases and decreases in intensity, allowing scientists to quantify how the emission evolved. Researchers used an instrument, which they informally call a "pulsar machine," that was recently installed at the same DSN dish in Australia.

"Within 10 days, something completely changed in the pulsar," Majid said. "It had started behaving like a normal radio pulsar again."

The question remains: Which came first, the pulsar or the magnetar? Some scientists argue that objects like J1119 begin as magnetars and gradually stop outbursting X-rays and gamma rays over time. But others propose the opposite theory: that the radio pulsar comes first and, over time, its magnetic field emerges from the supernova's rubble, and then the magnetar-like outbursts begin. But, just as babies grow to be adults and not vice versa, there is likely a single path for these objects to take.

To help solve this mystery, much as anthropologists study the remains of human ancestors at different stages of evolutionary history, astronomers want to find more "missing link" objects like J1119. This particular object was likely formed following a supernova 1,600 years ago. Monitoring similar objects may shed light on whether this phenomenon is specific to J1119, or whether this behavior is common in this class of objects.

Astronomers continue to monitor J1119 as well. Majid and colleagues observed in December a marked brightening of emissions at radio wavelengths, in a pattern consistent with other magnetars.

"Our recent observations show that this object contains a bit of the 'astrophysical DNA' of two different families of neutron stars," Prince said. "We are looking forward to finding other examples of this type of transitional object."

JPL, a division of Caltech, manages the Deep Space Network for NASA.