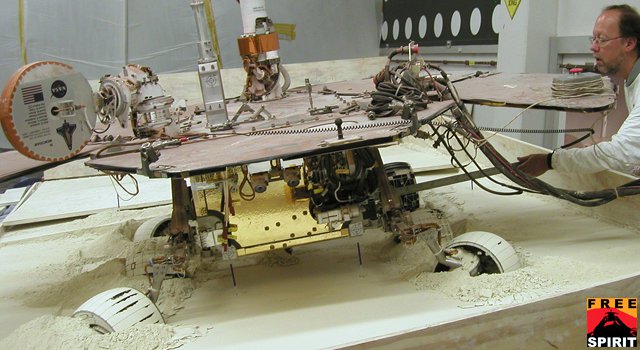 In this view from behind a test rover at NASA's Jet Propulsion Laboratory, Pasadena, Calif., the rear wheels of the rover are turned toward the left, and the left-front wheel is turned toward the the right. › Full image and caption

A live videocast and chat from JPL will give viewers a chance to ask questions of rover team members working to get Spirit rolling again.

The team that operates rovers on Mars is using a test rover in southern California to assess maneuvers the Mars rover Spirit might use to get out of soft, loose soil where its wheels have sunk hub-deep. A live videocast and chat from NASA's Jet Propulsion Laboratory, Pasadena, Calif., will give viewers a chance to ask questions of rover team members working to get Spirit rolling again.

The live event will air on the "NASAJPL" channel available on Ustream Web TV at: http://www.ustream.tv/channel/nasajpl on Thursday, July 23, beginning at 3 p.m. PDT (6 p.m. EDT and 2200 UTC).

Spirit and its twin, Opportunity, landed on Mars in January 2004 for what were planned as three-month missions to study sites on opposite sides of the planet. Both are still active and returning streams of scientific information. Spirit has not driven since May 6, 2009, when it had become partially embedded in the soil. To minimize the risk of worsening Spirit's predicament, operators decided to conduct a series of experiments with a test rover before driving Spirit again.

Participants in the July 23 event include:

Viewers may submit questions over Ustream or via Twitter. Twitter users may send their questions to @NASAJPL using the hashtag #FreeSpirit. In addition, if you are unable to take part in the live chat, you may submit questions in advance to chatquestion@jpl.nasa.gov and watch the archived video at a later time.

Information about Spirit and Opportunity is available at http://www.nasa.gov/rovers. Updates about testing of possible maneuvers for freeing Spirit are at http://www.jpl.nasa.gov/freespirit .

JPL is managed for NASA by the California Institute of Technology, Pasadena.
› Free Spirit updates