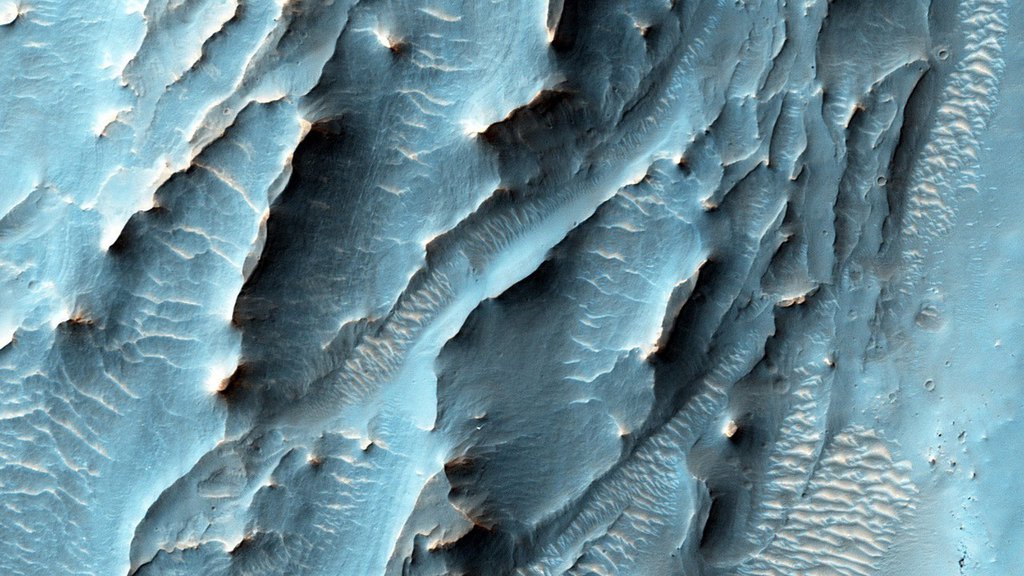 NASA's Mars Reconnaissance Orbiter, nearing the 10th anniversary of its arrival at Mars, used its High Resolution Imaging Science Experiment (HiRISE) camera to obtain this view of an area with unusual texture on the southern floor of Gale Crater.› Full image and caption
Credit: NASA/JPL-Caltech/Univ. of Arizona 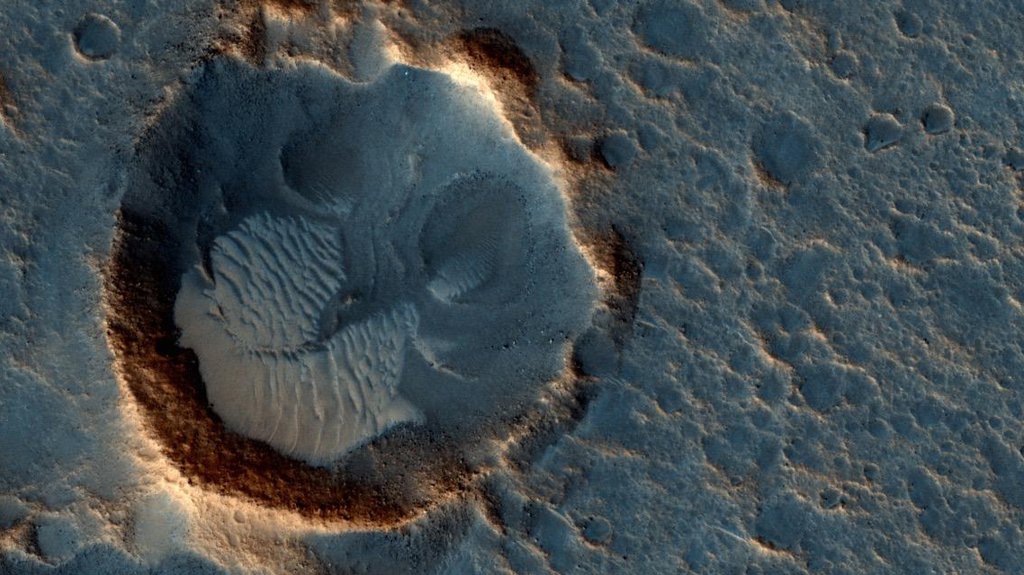 This image from the High Resolution Imaging Science Experiment (HiRISE) camera on NASA's Mars Reconnaissance Orbiter shows a location on Mars associated with the best-selling novel and Hollywood movie, "The Martian."› Full image and caption
Credit: NASA/JPL-Caltech/Univ. of Arizona 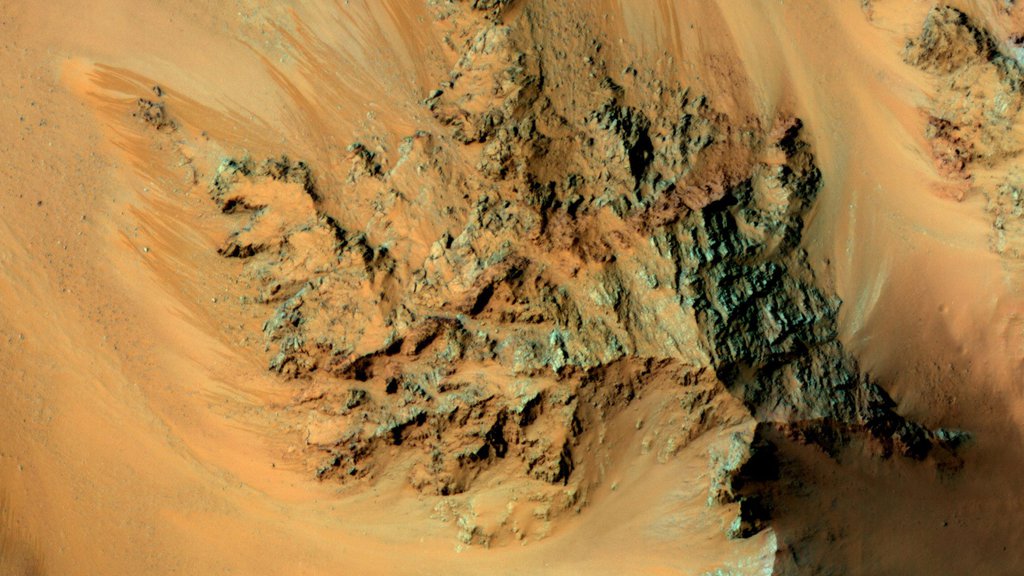 Recurring slope lineae (RSL) are active flows on warm Martian slopes that might be caused by seeping water. One of the most active sites known on Mars is in the central peaks (uplifted mountains of deep bedrock) of Hale Crater.› Full image and caption
Credit: NASA/JPL-Caltech/University of Arizona

› Of the seven missions currently active at Mars, MRO returns more data every week than the other six combined.

› The mission has shown how dynamic Mars remains today and how diverse its past environmental conditions were.

One example of MRO's major discoveries was published last year, about the possibility of liquid water being present seasonally on present-day Mars. It drew on three key capabilities researchers gained from this mission: telescopic camera resolution to find features narrower than a driveway; spacecraft longevity to track seasonal changes over several Martian years; and imaging spectroscopy to map surface composition.

Other discoveries have resulted from additional capabilities of the orbiter. These include identifying underground geologic structures, scanning atmospheric layers and observing the entire planet's weather daily. All six of the orbiter's science instruments remain productive in an extended mission more than seven years after completion of the mission's originally planned primary science phase.

"This mission has helped us appreciate how much Mars -- a planet that has changed greatly over time -- continues to change today," said MRO Project Scientist Rich Zurek of NASA's Jet Propulsion Laboratory, Pasadena, California. JPL manages the mission.

Data from MRO have improved knowledge about three distinct periods on Mars. Observations of the oldest surfaces on the planet show that diverse types of watery environments existed -- some more favorable for life than others. More recently, water cycled as a gas between polar ice deposits and lower-latitude deposits of ice and snow, generating patterns of layering linked to cyclical changes similar to ice ages on Earth.

The mission provides three types of crucial support for rover and stationary lander missions to Mars. Its observations enable careful evaluation of potential landing sites. They also help rover teams choose routes and destinations. Together with NASA's Mars Odyssey, which has been orbiting Mars since 2001, MRO relays data from robots on Mars' surface to NASA Deep Space Network antennas on Earth, multiplying the productivity of the surface missions.

The mission has been investigating areas proposed as landing sites for future human missions in NASA's Journey to Mars.

"The Mars Reconnaissance Orbiter remains a powerful asset for studying the Red Planet, with its six instruments all continuing capably a decade after orbit insertion. All this and the valuable infrastructure support that it provides for other Mars missions, present and future, make MRO a keystone of the current Mars Exploration Program," said Zurek.

On March 10, 2006, the spacecraft fired its six largest rocket engines for about 27 minutes, slowing it down enough for the gravity of Mars to catch it into orbit. Those engines had been used only once before, for 15 seconds during the first trajectory adjustment during the seven-month flight from Earth to Mars. They have been silent since arrival day. Smaller engines provide thrust for orbit adjustment maneuvers.

For its first three weeks at Mars, the spacecraft flew elongated, 35-hour orbits ranging as far as 27,000 miles (43,000 kilometers) from the Red Planet. During the next six months, a process called aerobraking used hundreds of carefully calculated dips into the top of the Martian atmosphere to gradually adjust the size of the orbit. Since September 2006, the craft has been flying nearly circular orbits lasting about two hours, at altitudes from 155 to 196 miles (250 to 316 kilometers).

The spacecraft's two large solar panels give MRO a wingspan the length of a school bus. That surface area helped with atmospheric drag during aerobraking and still cranks out about 2,000 watts of electricity when the panels face the sun. Generous power enables the spacecraft to transmit a torrent of data through its main antenna, a dish 10 feet (3 meters) in diameter. The total science data sent to Earth from MRO -- 264 terabits -- is more than all other interplanetary missions combined, past and present.

Lockheed Martin Space Systems, Denver, built the spacecraft with the capability to transmit copious data to suit the science goals of revealing Mars in great detail, which requires plenty of data.

For example, the mission's High Resolution Imaging Science Experiment (HiRISE) camera, managed by the University of Arizona, Tucson, has returned images that show features as small as a desk anywhere in observations that now have covered about 2.4 percent of the Martian surface, an area equivalent to two Alaskas, with many locations imaged repeatedly. The Context Camera (CTX), managed by Malin Space Systems, San Diego, has imaged more than 95 percent of Mars, with resolution showing features smaller than a tennis court. The Compact Reconnaissance Imaging Spectrometer (CRISM), managed by Johns Hopkins University Applied Physics Laboratory, Laurel, Maryland, also has imaged nearly 98 percent of the planet in multiple visual-light and infrared wavelengths, providing composition information at scales of 100 to 200 yards or meters per pixel.