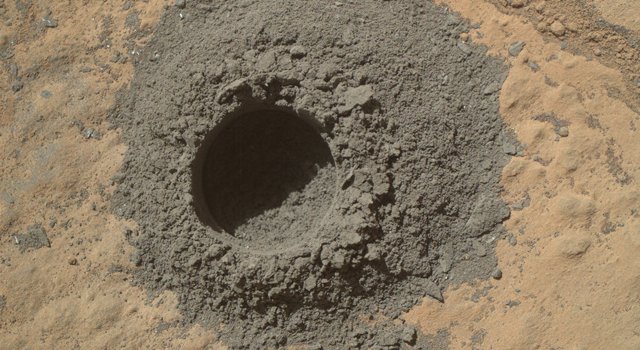 This two-step animation shows before and after views of a patch of sandstone scrubbed with the Dust Removal Tool, a wire-bristle brush, on NASA's Curiosity Mars rover. Both images were taken April 26, 2014, by the Mars Hand Lens Imager on Curiosity's arm. The target rock is called "Windjana."› Full image and caption
Credit: NASA/JPL-Caltech/MSSS

NASA's Curiosity Mars rover performed a "mini-drill" operation Tuesday, April 29, on the rock target under consideration for the mission's third sample-collection drilling. This preparatory activity produced a hole about eight-tenths of an inch (2 centimeters) deep, as planned, in the target called "Windjana." The rover team plans to decide whether to proceed with deeper drilling of this rock in coming days.

The team operating NASA's Curiosity Mars rover plans to proceed in coming days with the third-ever drilling into a rock on Mars to collect a sample for analysis.

The rover used several tools to examine the candidate site over the weekend, including a wire-bristle brush -- the Dust Removal Tool -- to clear away dust from a patch on the rock. The target slab of sandstone has been given the informal name "Windjana," after a gorge in Western Australia.

"In the brushed spot, we can see that the rock is fine-grained, its true color is much grayer than the surface dust, and some portions of the rock are harder than others, creating the interesting bumpy textures," said Curiosity science team member Melissa Rice of the California Institute of Technology, Pasadena. "All of these traits reinforce our interest in drilling here in order understand the chemistry of the fluids that bound these grains together to form the rock."

Before Curiosity drills deeply enough for collection of rock-powder sample, plans call for a preparatory "mini-drill" operation on the target, as a further check for readiness.

Curiosity's hammering drill collects powdered sample material from the interior of a rock, and then the rover prepares and delivers portions of the sample to laboratory instruments onboard. The first two Martian rocks drilled and analyzed this way were mudstone slabs neighboring each other in Yellowknife Bay, about 2.5 miles (4 kilometers) northeast of the rover's current location at a waypoint called "The Kimberley." Those two rocks yielded evidence last year of an ancient lakebed environment with key chemical elements and a chemical energy source that provided conditions billions of years ago favorable for microbial life.