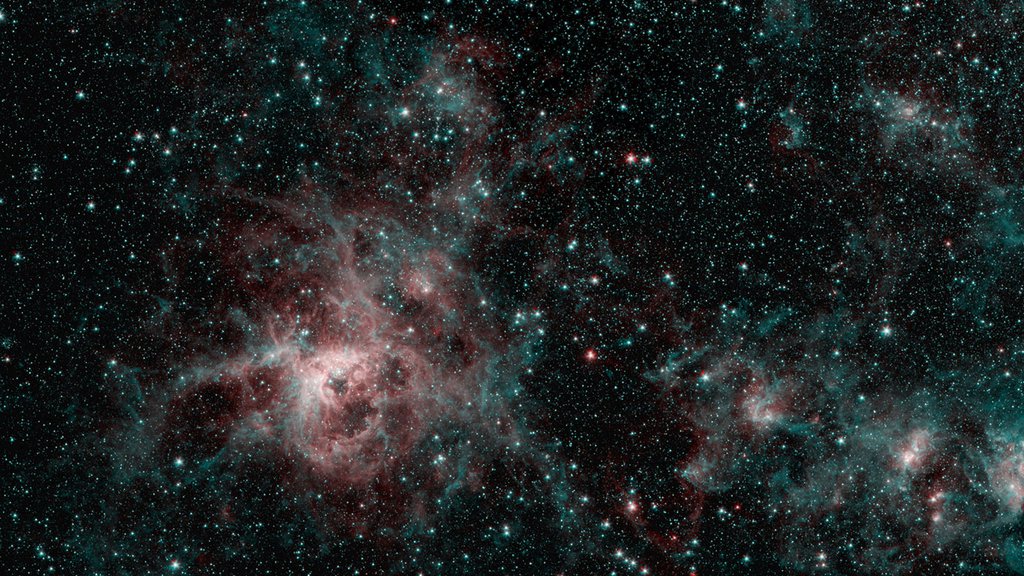 This image from NASA's Spitzer Space Telescope shows the Tarantula Nebula in two wavelengths of infrared light. The red regions indicate the presence of particularly hot gas, while the blue regions are interstellar dust that is similar in composition to ash from coal or wood-burning fires on Earth.› Full image and caption
Credit: NASA/JPL-Caltech

This spidery cloud of gas and dust is home to seveal fascinating features. NASA's Spitzer Space Telescope first observed the region in 2003, again in 2019, and many times in between.

The Tarantula Nebula, seen in this image by the Spitzer Space Telescope, was one of the first targets studied by the infrared observatory after its launch in 2003, and the telescope has revisited it many times since. Now that Spitzer is set to be retired on Jan. 30, 2020, scientists have generated a new view of the nebula from Spitzer data.

This high-resolution image combines data from multiple Spitzer observations, most recently in February and September 2019.

"I think we chose the Tarantula Nebula as one of our first targets because we knew it would demonstrate the breadth of Spitzer's capabilities," said Michael Werner, who has been Spitzer's project scientist since the mission's inception and is based at NASA's Jet Propulsion Laboratory in Pasadena, California. "That region has a lot of interesting dust structures and a lot of star formation happening, and those are both areas where infrared observatories can see a lot of things that you can't see in other wavelengths."

This annotated image from NASA's Spitzer Space Telescope shows the Tarantula Nebula in infrared light. The supernova 1987A and the starburst region R136 are noted. The magenta-colored regions are primarily interstellar dust that is similar in composition to ash from coal or wood fires on Earth.
Credit: NASA/JPL-Caltech
Full image and caption

The nebula also hosts R136, a "starburst" region, where massive stars form in extremely close proximity and at a rate far higher than in the rest of the galaxy. Within R136, in an area less than 1 light-year across (about 6 trillion miles, or 9 trillion kilometers), there are more than 40 massive stars, each containing at least 50 times the mass of our Sun. By contrast, there are no stars at all within 1 light-year of our Sun. Similar starburst regions have been found in other galaxies, containing dozens of massive stars - a higher number of massive stars than what is typically found in the rest of their host galaxies. How these starburst regions arise remains a mystery.

On the outskirts of the Tarantula Nebula, you can also find one of astronomy's most-studied stars that has exploded in a supernova. Dubbed 1987A because it was the first supernova spotted in 1987, the exploded star burned with the power of 100 million Suns for months. The shockwave from that event continues to move outward into space, encountering material ejected from the star during its dramatic death.

When the shockwave collides with dust, the dust heats up and begins to radiate in infrared light. In 2006, Spitzer observations saw that light and determined that the dust is largely composed of silicates, a key ingredient in the formation of rocky planets in our solar system. In 2019, scientists used Spitzer to study 1987A to monitor the changing brightness of the expanding shockwave and debris to learn more about how these explosions change their surrounding environment.

To see more amazing images from Spitzer, check out the NASA Selfies App, which has a bundle of new Spitzer images. Available for iOS and Android, the app lets you create a snapshot of yourself in a virtual spacesuit, posing in front of gorgeous cosmic locations, including the Tarantula Nebula. Its simple interface lets you snap a photo of yourself, pick your background and share on social media while also providing you some of the science behind the images.

For an even more immersive Spitzer experience, check out the new Spitzer Final Voyage VR experience, which places you in a 360-degree starscape that replicates Spitzer's current location orbiting the Sun, about 160 million miles (260 million kilometers) behind Earth. The narrated video shows you how the infrared telescope operates and what the universe looks like in infrared light. The VR experience is viewable on the Spitzer YouTube channel using mobile-based VR headsets, and in the Exoplanets Excursion VR app via Oculus Rift and HTC Vive headsets.