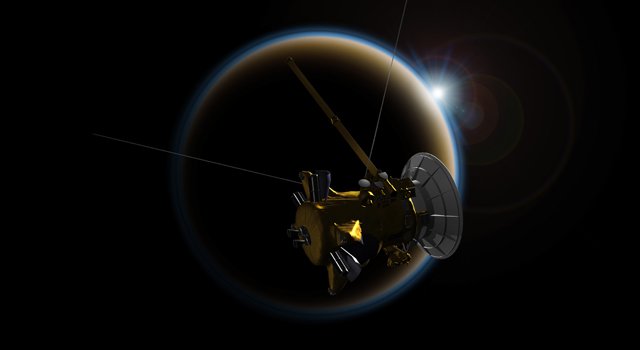 Scientists working with data from NASA's Cassini mission have developed a new way to understand the atmospheres of exoplanets using Saturn's smoggy moon Titan as a stand-in.

Scientists working with data from NASA's Cassini mission have developed a new way to understand the atmospheres of exoplanets by using Saturn's smog-enshrouded moon Titan as a stand-in. The new technique shows the dramatic influence that hazy skies could have on our ability to learn about these alien worlds orbiting distant stars.

The work was performed by a team of researchers led by Tyler Robinson, a NASA Postdoctoral Research Fellow at NASA's Ames Research Center in Moffett Field, California. The findings were published May 26 in the Proceedings of the National Academy of Sciences.

"It turns out there's a lot you can learn from looking at a sunset," Robinson said.

Light from sunsets, stars and planets can be separated into its component colors to create spectra, as prisms do with sunlight, in order to obtain hidden information. Despite the staggering distances to other planetary systems, in recent years researchers have begun to develop techniques for collecting spectra of exoplanets. When one of these worlds transits, or passes in front of its host star as seen from Earth, some of the star's light travels through the exoplanet's atmosphere, where it is changed in subtle, but measurable, ways. This process imprints information about the planet that can be collected by telescopes. The resulting spectra are a record of that imprint.

Spectra enable scientists to tease out details about what exoplanets are like, such as aspects of the temperature, composition and structure of their atmospheres.

Robinson and his colleagues exploited a similarity between exoplanet transits and sunsets witnessed by the Cassini spacecraft at Titan. These observations, called solar occultations, effectively allowed the scientists to observe Titan as a transiting exoplanet without having to leave the solar system. In the process, Titan's sunsets revealed just how dramatic the effects of hazes can be.

Multiple worlds in our own solar system, including Titan, are blanketed by clouds and high-altitude hazes. Scientists expect that many exoplanets would be similarly obscured. Clouds and hazes create a variety of complicated effects that researchers must work to disentangle from the signature of these alien atmospheres, and thus present a major obstacle for understanding transit observations. Due to the complexity and computing power required to address hazes, models used to understand exoplanet spectra usually simplify their effects.

"Previously, it was unclear exactly how hazes were affecting observations of transiting exoplanets," said Robinson. "So we turned to Titan, a hazy world in our own solar system that has been extensively studied by Cassini."

The team used four observations of Titan made between 2006 and 2011 by Cassini's visual and infrared mapping spectrometer instrument. Their analysis provided results that include the complex effects due to hazes, which can now be compared to exoplanet models and observations.

With Titan as their example, Robinson and colleagues found that hazes high above some transiting exoplanets might strictly limit what their spectra can reveal to planet transit observers. The observations might be able to glean information only from a planet's upper atmosphere. On Titan, that corresponds to about 90 to 190 miles (150 to 300 kilometers) above the moon's surface, high above the bulk of its dense and complex atmosphere.

An additional finding from the study is that Titan's hazes more strongly affect shorter wavelengths, or bluer, colors of light. Studies of exoplanet spectra have commonly assumed that hazes would affect all colors of light in similar ways. Studying sunsets through Titan's hazes has revealed that this is not the case.

"People had dreamed up rules for how planets would behave when seen in transit, but Titan didn't get the memo," said Mark Marley, a co-author of the study at NASA Ames. "It looks nothing like some of the previous suggestions, and it's because of the haze."

The team's technique applies equally well to similar observations taken from orbit around any world, not just Titan. This means that researchers could study the atmospheres of planets like Mars and Saturn in the context of exoplanet atmospheres as well.

"It's rewarding to see that Cassini's study of the solar system is helping us to better understand other solar systems as well," said Curt Niebur, Cassini program scientist at NASA Headquarters in Washington.