Sun in the Way Will Affect Mars Missions in April 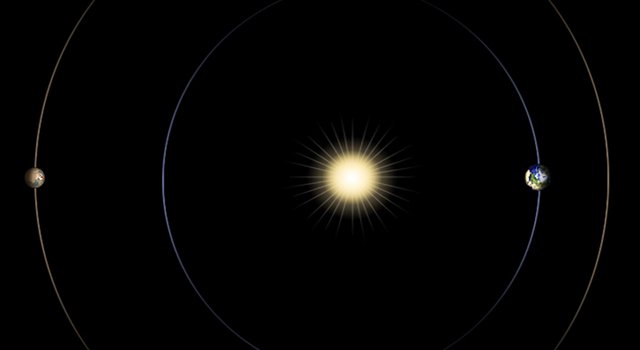 This diagram illustrates the positions of Mars, Earth and the sun during a period that occurs approximately every 26 months, when Mars passes almost directly behind the sun from Earth's perspective.› Larger image
Credit: NASA/JPL-Caltech

The positions of the planets next month will mean diminished communications between Earth and NASA's spacecraft at Mars.

PASADENA, Calif. - The positions of the planets next month will mean diminished communications between Earth and NASA's spacecraft at Mars.

Mars will be passing almost directly behind the sun, from Earth's perspective. The sun can easily disrupt radio transmissions between the two planets during that near-alignment. To prevent an impaired command from reaching an orbiter or rover, mission controllers at NASA's Jet Propulsion Laboratory, Pasadena, Calif., are preparing to suspend sending any commands to spacecraft at Mars for weeks in April. Transmissions from Mars to Earth will also be reduced.

The travels of Earth and Mars around the sun set up this arrangement, called a Mars solar conjunction, about once every 26 months.

"This is our sixth conjunction for Odyssey," said Chris Potts of JPL, mission manager for NASA's Mars Odyssey, which has been orbiting Mars since 2001. "We have plenty of useful experience dealing with them, though each conjunction is a little different."

The Mars solar conjunctions that occur once about every 26 months are not identical to each other. They can differ in exactly how close to directly behind the sun Mars gets, and they can differ in how active the sun is. The sun's activity, in terms of sunspots and solar flares, varies on a 22-year cycle.

This year, the apparent angle between Mars and the sun (if you could see Mars against the glare of the sun--but don't try, because it's dangerous to the eyes) will slim to 0.4 degree on April 17. The sun is in a more active period of solar flares for its current cycle, compared to the 2011 conjunction, but this cycle has been relatively mild.

"The biggest difference for this 2013 conjunction is having Curiosity on Mars," Potts said. Odyssey and the Mars Reconnaissance Orbiter relay almost all data coming from Curiosity and the Mars Exploration Rover Opportunity, as well as conducting the orbiters' own science observations.

Transmissions from Earth to the orbiters will be suspended while Mars and the sun are two degrees or less apart in the sky, from April 9 to 26, with restricted commanding during additional days before and after. Both orbiters will continue science observations on a reduced basis compared to usual operations. Both will receive and record data from the rovers. Odyssey will continue transmissions Earthward throughout April, although engineers anticipate some data dropouts, and the recorded data will be retransmitted later.

The Mars Reconnaissance Orbiter will go into a record-only mode on April 4. "For the entire conjunction period, we'll just be storing data on board," said Deputy Mission Manager Reid Thomas of JPL. He anticipates that the orbiter could have about 40 gigabits of data from its own science instruments and about 12 gigabits of data from Curiosity accumulated for sending to Earth around May 1.

NASA's Mars Exploration Rover Opportunity is approaching its fifth solar conjunction. Its team will send no commands between April 9 and April 26. The rover will continue science activities using a long-term set of commands to be sent beforehand.

"We are doing extra science planning work this month to develop almost three weeks of activity sequences for Opportunity to execute throughout conjunction," said Opportunity Mission Manager Alfonso Herrera of JPL. The activities during the conjunction period will not include any driving.

Curiosity, the newest asset on Mars, can also continue making science observations from the location where it will spend the conjunction period. Curiosity's controllers plan to suspend commanding from April 4 to May 1.

"We will maintain visibility of rover status two ways," said Torsten Zorn of JPL, conjunction planning leader for the mission's engineering operations team. "First, Curiosity will be sending daily beeps directly to Earth. Our second line of visibility is in the Odyssey relays."

JPL, a division of the California Institute of Technology, manages the projects operating both NASA Mars orbiters and both Mars rovers for NASA's Science Mission Directorate, Washington.