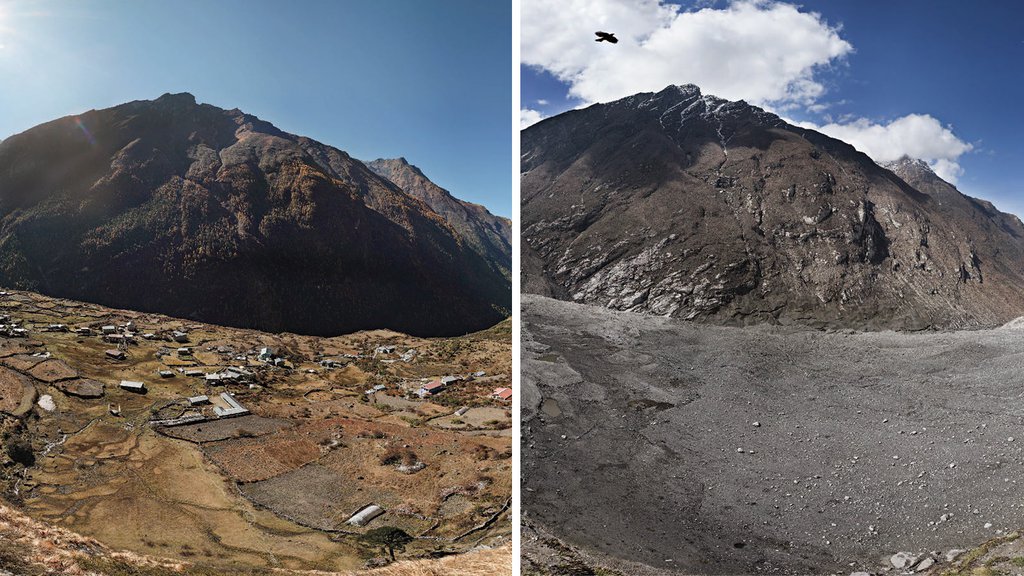 Before-and-after photographs of Nepal's Langtang Valley, showing the near-complete destruction of Langtang village due to a massive landslide caused by the 2015 Gorkha earthquake. Photos from 2012 (pre-quake) and 2015 (post-quake).
Credit: David Breahshears/GlacierWorks 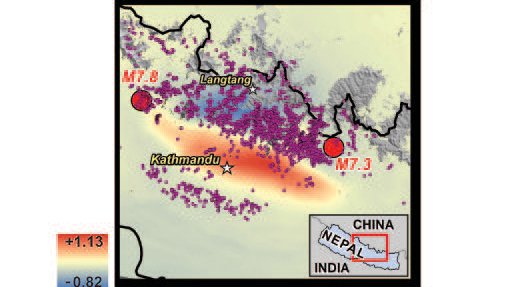 Distribution of landslides from the 2015 Nepal Gorkha earthquake relative to the Earth surface deformation field. Purple dots indicate locations of 4,312 mapped landslides. The red area indicates where the ground surface was moved upward during the quake, while the blue area indicates where the ground moved downward. Also shown are the epicenters of the main shock and largest aftershock. Vertical displacements are from the JAXA ALOS-2 ScanSAR interferogram (Feb. 21 and May 2, 2015 scenes).
Credit: Landslide mapping team/University of Arizona/NASA/JPL-Caltech/JAXA 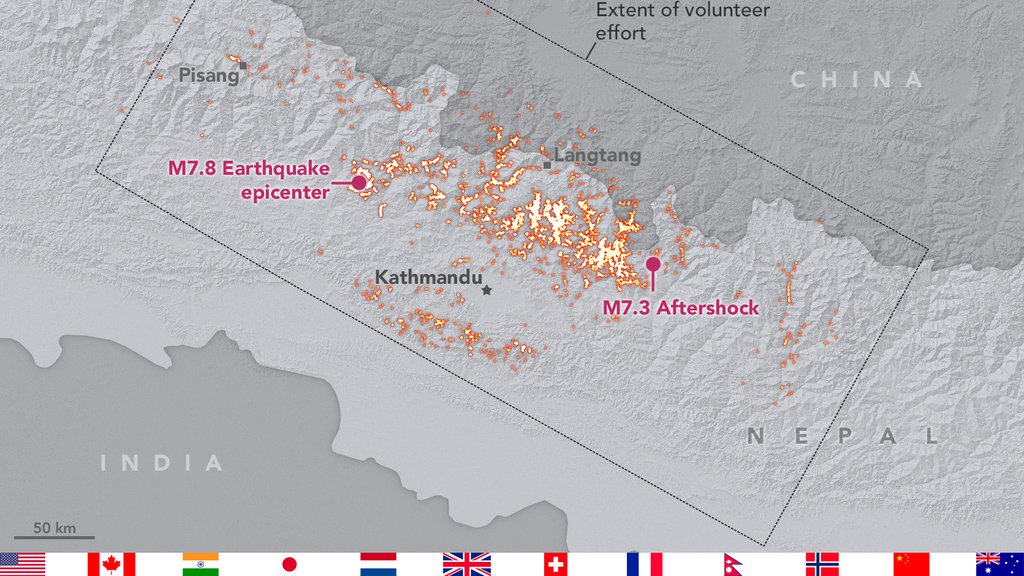 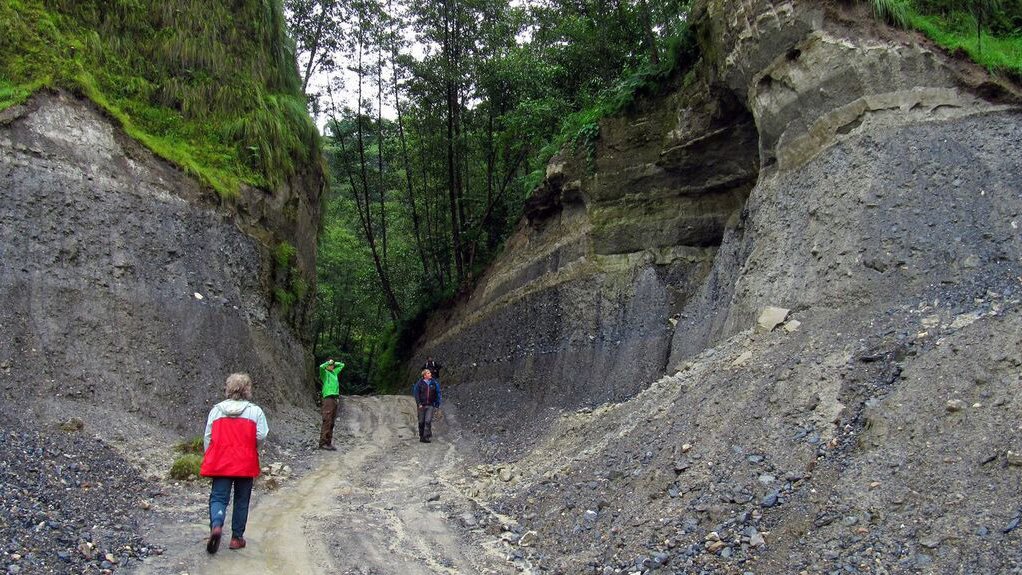 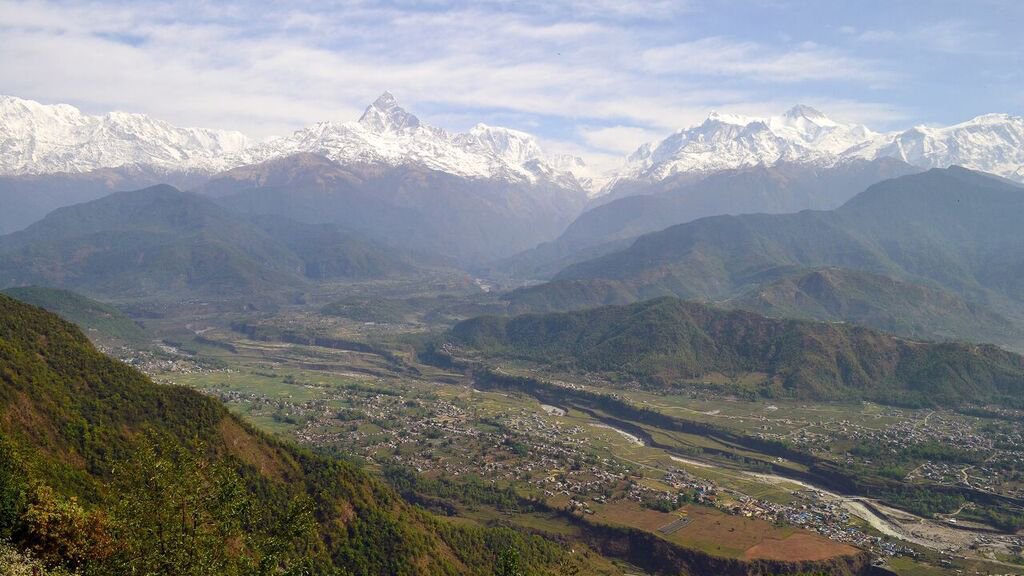 The Annapurna Massif thrones above the city of Pokhara, and has shed several cubic miles of earthquake debris to form the city's foundations.› Larger image
Credit: University of Potsdam, Germany

The devastating magnitude 7.8 Gorkha, Nepal earthquake in April 2015 triggered far fewer landslides and much less damage to glacial lakes than expected; while in medieval times, large earthquakes in Nepal unleashed massive changes upon the landscape.

The findings are reported in two new papers published today in the journal Science. Scientists from NASA and three universities detailed the results in a news conference at the Fall Meeting of the American Geophysical Union in San Francisco. The studies yield insights into how future quakes may affect the Himalayan landscape and residents.

The study of the April 25, 2015 Gorkha quake was conducted by an international team of scientists led by Jeffrey Kargel, senior associate research scientist in the department of hydrology and water resources at the University of Arizona, Tucson. The team used satellite imagery from more than 10 satellites and four countries to help identify areas where landslides had happened, particularly in remote mountain villages far from population centers. The satellite data were augmented by media reports, eyewitness photography and field assessments from helicopters. The researchers limited their analysis to the period between the earthquake and the onset of the monsoon season in June, in order to distinguish between earthquake-related landslides and landslides triggered by rain.

The team found that the 4,312 landslides that happened within six weeks of the quake were far fewer than occurred after similar-magnitude quakes in other mountainous areas. In addition, the team surveyed 491 glacial lakes and saw only nine that were affected by landslides. Satellite images did not reveal any flooding from those lakes.

"It was a really bad earthquake -- over 9,000 fatalities in four countries, primarily Nepal," said Kargel. "As horrific as this was, the situation could have been far worse for an earthquake of this magnitude."

In addition to identifying the locations and severity of landslides, the researchers found an unexpected pattern of where the landslides occurred.

Co-author Eric Fielding of NASA's Jet Propulsion Laboratory, Pasadena, California, used satellite radar imagery to create a map of the terrain that dropped and rose during the earthquake. The results reveal Earth's surface dropped almost 5 feet (1.4 meters) in some places, and rose as much as 5 feet (1.5 meters) in others.

The research team is currently investigating why there were fewer landslides than expected and why they are distributed as they are. One possible explanation is that the quake caused much less shaking at the surface than other quakes of similar magnitude.

"Seismologists recorded relatively less shaking with seismometers in Kathmandu and other locations, and the smaller number of landslides suggests the shaking may have been reduced in the whole area," said Fielding.

"All kinds of Earth processes can cause a landslide," Kargel said. "The Gorkha earthquake observations add to our understanding of landslides around the world."

The group then joined with NASA's Applied Sciences Disasters group to use remote sensing to document damage and identify areas of need. NASA organized a broad, interagency response to systematically map the landslides, using satellites. Government space agencies and commercial enterprises provided thousands of images. The satellites included WorldView 1, 2 and 3 from DigitalGlobe, Landsat 7 and 8 from NASA and USGS, Earth Observer-1 from NASA, JAXA's ASTER instrument on NASA's Terra satellite, Gaofen-1 from the China National Space Administration, RADARSAT-2 from the Canadian Space Agency and MDA, and ALOS-2 from JAXA.

A volunteer analyst network spanning nine nations conducted the landslide inventory. The network had free access to images and other data to map and report geological hazards. This rapid and open information-sharing among many different organizations led to timely and relevant distribution of information to a range of groups, including international emergency response teams. An example is the International Centre for Integrated Mountain Development (ICIMOD), which used the data to brief Nepal's government, leading to formation of a geohazard task force to assess current and future vulnerabilities.

Kargel said while the initial research effort was purely humanitarian, the scientists soon realized their database could be analyzed to learn more about quake-related geohazards.

In the second study, professor Oliver Korup of the University of Potsdam, Germany, discussed the results of a geologic survey of Pokhara, Nepal's second largest city.

A team led by Wolfgang Schwanghart of the Institute of Earth and Environmental Science at the University of Potsdam found Pokhara is built upon debris generated by at least three medieval quakes of magnitude 8 or greater, occurring in approximately 1100, 1255 and 1344 A.D. Quake debris from the Annapurna Massif buried approximately 57 square miles (148 square kilometers) of the Pokhara Valley, invading river valleys for up to 4.3 miles (7 kilometers) upstream and ponding several lakes that still exist today.

Korup says Pokhara's landscape shows that large Himalayan earthquakes can unleash mass movements far larger than those sustained in the 2015 Gorkha earthquake. Rivers today are still adjusting to these medieval disturbances by slicing through the deposits, eroding banks and shifting channels.

"Pokhara's recent geological foundations are a rare opportunity to grasp the landscape-changing impacts of large Himalayan earthquakes," Korup said. "The way that rivers are still working their way through the quake debris many centuries later illustrates a serious long-term consequence of strong seismic ground shaking in mountains."

Images from the briefing are online at: