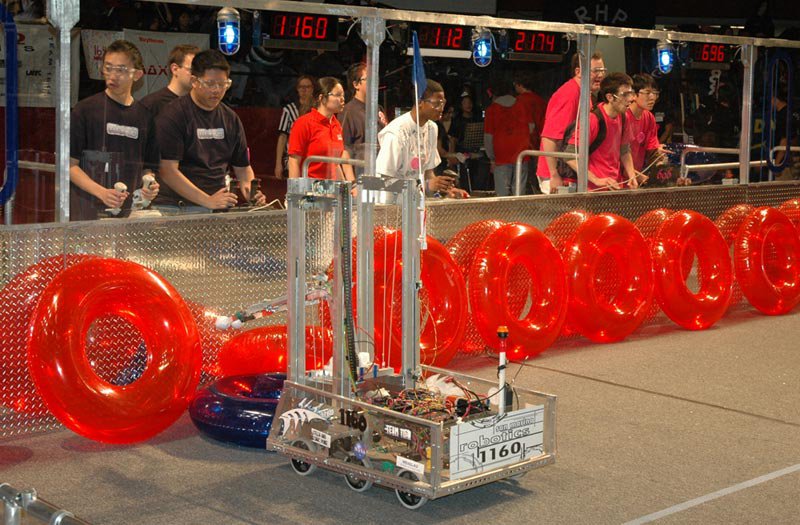 A high school robotics team sponsored by JPL was one of three teams capturing top honors at this year's Los Angeles regional FIRST (For Inspiration and Recognition of Science and Technology) robotics competition.

Hope Chapel Academy in Hermosa Beach, Calif., shares the regional championship with Bellarmine College Preparatory, San Jose, and High Tech High School in Los Angeles. The teams are invited to compete against teams from around the world at the FIRST robotics championship at the Georgia Dome in Atlanta, April 12 through 14.

Another JPL-sponsored team, Clark Magnet High School in La Crescenta, made it to the final round, along with a team from Campbell Hall School in North Hollywood, and a team that included Shuttleworth Academy, Delphi Academy and Renaissance Academy in Los Angeles.

Hope Chapel Academy has won the Los Angeles regional competition four times and was national champion in 2005. JPL engineer Rob Steele has been an advisor to the school's "Beach Bot" team for 11 years. He says each year the competition has an interesting challenge

"This year we had to modify our robot because it was too heavy," Steele said. "When we came into the competition, we were 7 pounds overweight, so we had to remove one of the motors. Later we learned the two motors were actually fighting with each other, so when we removed one of them, the robot actually worked much better."

In this year's game, "Rack 'N' Roll" robots grabbed colored floatation rings and placed them on a 10-foot-high circular rack anchored at the center of the arena. Teams scored bonus points if their robots returned to their home zones and were lifted by another robot in their alliance team, before the match ended.

"This is the best experience available for high school students in the country," said Amir Abo-Shaeer, advisor to the JPL-sponsored Dos Pueblos High School team from Goleta, Calif. "You're competing against the game. It's competitive and cooperative," he said. "There's no sport like it."