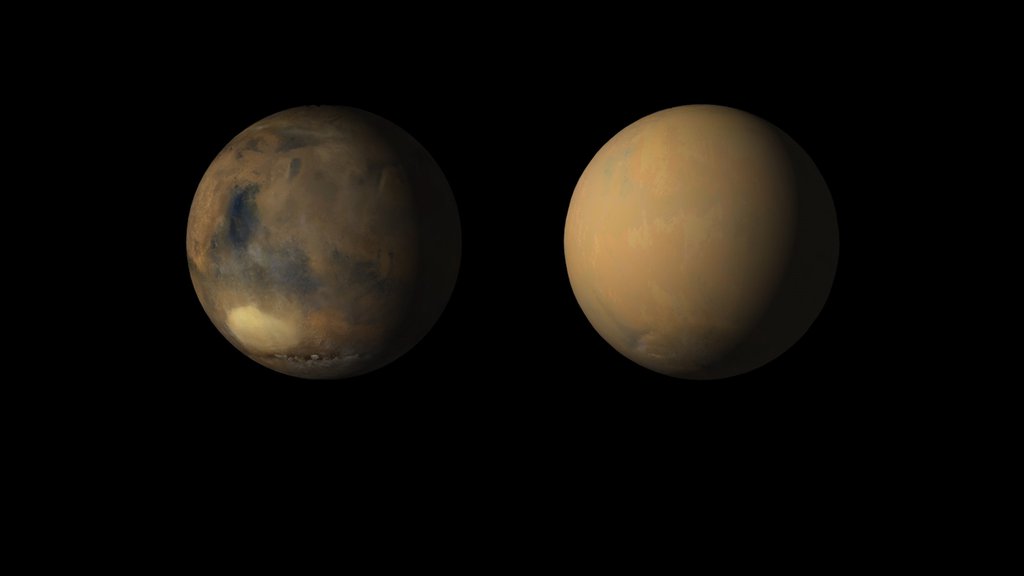 Scientists with NASA's Mars orbiters have been waiting years for an event like the current Mars global dust storm.

Storm chasing takes luck and patience on Earth -- and even more so on Mars.

For scientists watching the Red Planet from data gathered by NASA's orbiters, the past month has been a windfall. "Global" dust storms, where a runaway series of storms creates a dust cloud so large it envelops the planet, only appear every six to eight years (that's three to four Mars years). Scientists still don't understand why or how exactly these storms form and evolve.

In June, one of these dust events rapidly engulfed the planet. Scientists first observed a smaller-scale dust storm on May 30. By June 20, it had gone global.

For the Opportunity rover, that meant a sudden drop in visibility from a clear, sunny day to that of an overcast one. Because Opportunity runs on solar energy, scientists had to suspend science activities to preserve the rover's batteries. As of July 18th, no response has been received from the rover.

Luckily, all that dust acts as an atmospheric insulator, keeping nighttime temperatures from dropping down to lower than what Opportunity can handle. But the nearly 15-year-old rover isn't out of the woods yet: it could take weeks, or even months, for the dust to start settling. Based on the longevity of a 2001 global storm, NASA scientists estimate it may be early September before the haze has cleared enough for Opportunity to power up and call home.

When the skies begin to clear, Opportunity's solar panels may be covered by a fine film of dust. That could delay a recovery of the rover as it gathers energy to recharge its batteries. A gust of wind would help, but isn't a requirement for a full recovery..

While the Opportunity team waits in earnest to hear from the rover, scientists on other Mars missions have gotten a rare chance to study this head-scratching phenomenon.

The Mars Reconnaissance Orbiter, Mars Odyssey, and Mars Atmosphere and Volatile EvolutioN (MAVEN) orbiters are all tailoring their observations of the Red Planet to study this global storm and learn more about Mars' weather patterns. Meanwhile, the Curiosity rover is studying the dust storm from the Martian surface.

Here's Here's how each mission is currently studying the dust storm, and what we might learn from it:

With the THEMIS instrument (Thermal Emission Imaging System), scientists can track Mars' surface temperature, atmospheric temperature, and the amount of dust in the atmosphere. This allows them to watch the dust storm grow, evolve, and dissipate over time.

"This is one of the largest weather events that we've seen on Mars," since spacecraft observations began in the 1960s, said Michael Smith, a scientist at NASA's Goddard Spaceflight Center in Greenbelt, Maryland who works on the THEMIS instrument. "Having another example of a dust storm really helps us to understand what's going on."

Since the dust storm began, the THEMIS team has increased the frequency of global atmospheric observations from every 10 days to twice per week, Smith said. One mystery they're still trying to solve: How these dust storms go global. "Every Mars year, during the dusty season, there are a lot of local- or regional-scale storms that cover one area of the planet," Smith said. But scientists aren't yet sure how these smaller storms sometimes grow to end up encircling the entire planet.

Mars Reconnaissance Orbiter has two instruments studying the dust storm. Each day, the Mars Color Imager (MARCI) maps the entire planet in mid-afternoon to track the evolution of the storm. Meanwhile, MRO's Mars Climate Sounder (MCS) instrument measures how the atmosphere's temperature changes with altitude. Since the end of May, the instruments have observed the onset and rapid expansion of a dust storm on Mars.

With these data, scientists are studying how the dust storm changes the planet's atmospheric temperatures. Just as in Earth's atmosphere, changing temperature on Mars can affect wind patterns and even the circulation of the entire atmosphere. This provides a powerful feedback: Solar heating of the dust lofted into the atmosphere changes temperatures, which changes winds, which may amplify the storm by lifting more dust from the surface.

Scientists want to know the details of the storm -- where is the air rising or falling? How do the atmospheric temperatures now compare to a storm-less year? And as with Mars Odyssey, the MRO team wants to know how these dust storms go global.

"The very fact that you can start with something that's a local storm, no bigger than a small [U.S.] state, and then trigger something that raises more dust and produces a haze that covers almost the entire planet is remarkable," said Rich Zurek of NASA's Jet Propulsion Laboratory, Pasadena, California, the project scientist for MRO.

Scientists want to find out why these storms arise every few years, which is hard to do without a long record of such events. It'd be as if aliens were observing Earth and seeing the climate effects of El Niño over many years of observations -- they'd wonder why some regions get extra rainy and some areas get extra dry in a seemingly regular pattern.

But MAVEN isn't studying the dust storm itself. Rather, the MAVEN team wants to study how the dust storm affects Mars' upper atmosphere, about 62 miles (more than 100 kilometers) above the surface -- where the dust doesn't even reach. MAVEN's mission is to figure out what happened to Mars' early atmosphere. We know that at some point billions of years ago, liquid water pooled and ran along Mars' surface, which means that its atmosphere must have been thicker and more insulating, similar to Earth's. Since MAVEN arrived at Mars in 2014, its investigations have found that this atmosphere may have been stripped away by a torrent of solar wind over several hundred million years, between 3.5 and 4.0 billion years ago.

But there are still nuances to figure out, such as how dust storms like the current one affect how atmospheric molecules escape into space, Jakosky said. For instance, the dust storm acts as an atmospheric insulator, trapping heat from the Sun. Does this heating change the way molecules escape the atmosphere? It is also likely that, as the atmosphere warms, more water vapor rises high enough to be broken down by sunlight, with the solar wind sweeping the hydrogen atoms into space, Jakosky said.

The team won't have answers for a while yet, but each of MAVEN's five orbits per day will continue to provide invaluable data.

Most of NASA's spacecraft are studying the dust storm from above. The Mars Science Laboratory mission's Curiosity rover has a unique perspective: the nuclear-powered science machine is largely immune to the darkened skies, allowing it to collect science from within the beige veil enveloping the planet.

Curiosity has a number of "eyes" that can determine the abundance and size of dust particles based on how they scatter and absorb light. That includes its Mastcam, ChemCam, and an ultraviolet sensor on REMS, its suite of weather instruments. REMS can also help study atmospheric tides -- shifts in pressure that move as waves across the entire planet's thin air. These tides change drastically based on where the dust is globally, not just inside Gale crater.

The global storm may also reveal secrets about Martian dust devils and winds. Dust devils can occur when the planet's surface is hotter than the air above it. Heating generates whirls of air, some of which pick up dust and become dust devils. During a dust storm, there's less direct sunlight and lower daytime temperatures; this might mean fewer devils swirling across the surface.

Even new drilling can advance dust storm science: watching the small piles of loose material created by Curiosity's drill is the best way of monitoring winds.

Scientists think the dust storm will last at least a couple of months. Every time you spot Mars in the sky in the weeks ahead, remember how much data scientists are gathering to better understand the mysterious weather of the Red Planet.