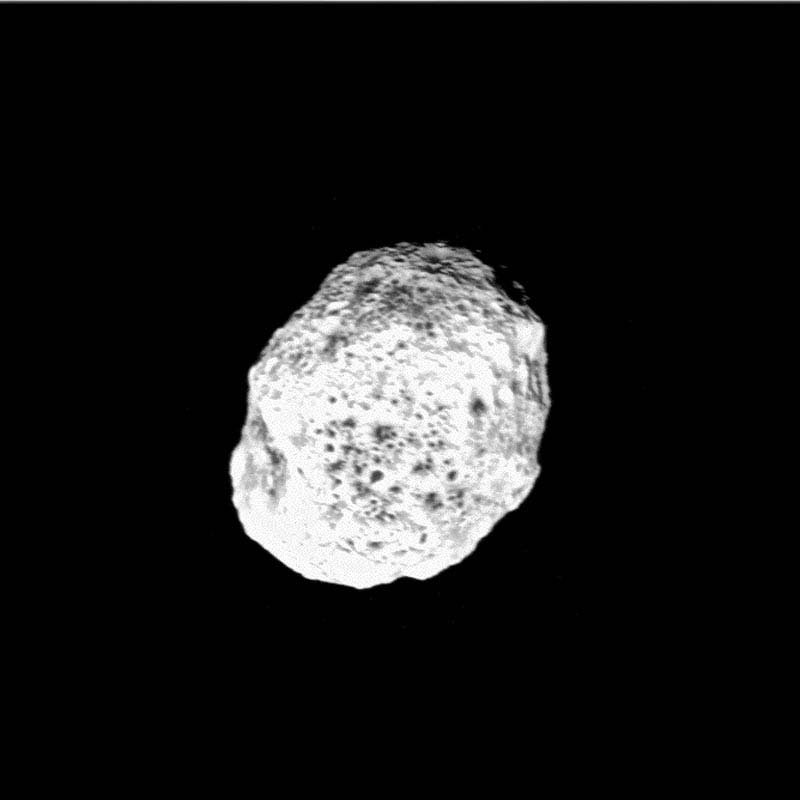 Two new Cassini views of Saturn's tumbling moon Hyperion offer the best looks yet at one of the icy, irregularly-shaped moons that orbit the giant, ringed planet.

Two new Cassini views of Saturn's tumbling moon Hyperion offer the best looks yet at one of the icy, irregularly-shaped moons that orbit the giant, ringed planet.

The image products released today include a movie sequence and a 3D view, and are available at http://saturn.jpl.nasa.gov, http://www.nasa.gov/cassini and http://ciclops.org.

The views were acquired between June 9 and June 11, 2005, during Cassini's first brush with Hyperion.

Hyperion is decidedly non-spherical and its unusual shape is easy to see in the movie, which was acquired over the course of two and a half days. Jagged outlines visible on the moon's surface are indicators of large impacts that have chipped away at its shape like a sculptor.

Preliminary estimates of its density show that Hyperion is only about 60 percent as dense as solid water ice, indicating that much of its interior (40 percent or more) must be empty space. This makes the moon more like an icy rubble pile than a solid body.

In both the movie and the 3D image, craters are visible on the moon’s surface down to the limit of resolution, about 1 kilometer (0.6 mile) per pixel. The fresh appearance of most of these craters, combined with their high spatial density, makes Hyperion look something like a sponge.

The moon's spongy-looking exterior is an interesting coincidence, as much of Hyperion’s interior appears to consist of voids. Hyperion is close to the size limit where, like a child compacting a snowball, internal pressure due to the moon’s own gravity will begin to crush weak materials like ice, closing pore spaces and eventually creating a more nearly spherical shape.