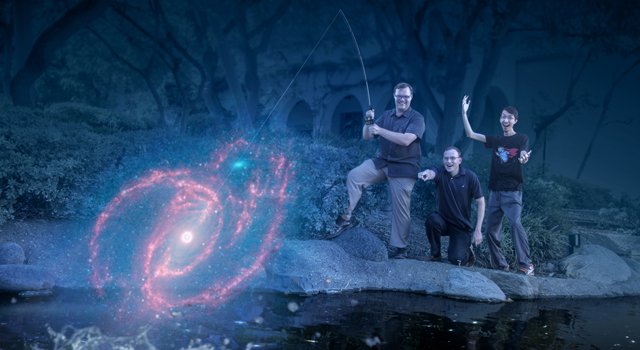 Scientists "fish" for galaxies in this playful, digitally altered photo. The researchers are part of a program called SPLASH, which is using NASA's Spitzer Space Telescope to dive deep into the cosmic sea and find some of the most remote galaxies known. Early results are turning up surprisingly big "fish" -- massive galaxies -- in the darkest reaches of the universe, dating back to a time when our universe was less than one billion years old.› Full image and caption
Credit: NASA/JPL-Caltech 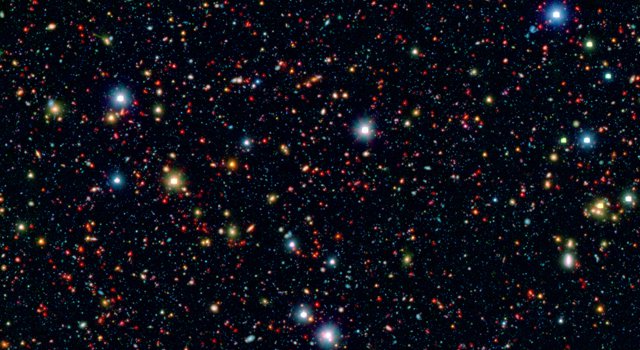 Millions of galaxies populate the patch of sky known as the COSMOS field, short for Cosmic Evolution Survey, a portion of which is shown here. Even the smallest dots in this image are galaxies, some up to 12 billion light-years away.› Full image and caption
Credit: NASA/JPL-Caltech

A new survey of galaxies by NASA's Spitzer Space Telescope is taking a plunge into the deep and uncharted waters of our cosmos. In one of the longest surveys the telescope will have ever performed, astronomers have begun a three-month expedition trawling for faint galaxies billions of light-years away.

The results are already yielding surprises.

"If you think of our survey as fishing for galaxies in the cosmic sea, then we are finding many more big fish in deep waters than previously expected," said Charles Steinhardt of NASA's Infrared Processing and Analysis Center (IPAC) at the California Institute of Technology in Pasadena. Steinhardt is lead author of a new study appearing in the Astrophysical Journal Letters.

These early results from the SPLASH project, an international effort officially called the Spitzer Large Area Survey with Hyper-Suprime-Cam, build on previous evidence from Spitzer and other telescopes showing that the universe's earliest galaxies are more massive than expected. The project is turning up hundreds of hefty galaxies 100 times the mass of our own Milky Way, dating back to a time when our universe was less than one billion years old. (Our universe is 13.8 billion years old.)

The findings cast doubt on current models of galaxy formation, which struggle to explain how these remote and young galaxies grew so big so fast.

"Galaxies were being assembled faster than we thought, and we can only see this by finding large numbers of them with a survey like SPLASH," said Peter Capak, also of IPAC, and principal investigator of SPLASH.

While astronomers have seen such massive galaxies before, SPLASH is unique in finding large numbers of them. Now that Spitzer is in the "warm" phase of its mission, it dedicates more time to long-term projects such as this one. The telescope ran out of the coolant needed to chill some of its instruments in 2009, but two of its infrared channels work at the slightly warmer temperature. With fewer instruments, the telescope spends more time surveying large patches of sky.

By the end of the SPLASH survey, Spitzer will have spent 2,475 hours staring at two sky fields known as the Cosmic Evolution Survey (COSMOS) and Subaru/XMM-Newton deep field (SXDS), equivalent in size to about eight full moons. These are two of the darkest patches of sky, away from the plane of our Milky Way galaxy's flat spiral disk and its bright starlight. Many telescopes have studied these regions extensively at multiple wavelengths of light, spying the faint glow of millions of galaxies beyond our own. Spitzer's infrared vision helps weigh the galaxies, revealing their masses.

Astronomers are surprised by the early SPLASH results and its catch of "big fish." Current theories of star formation hold that the very first galaxies collided and merged, bulking up in size. In these models, the stars formed in bursts as these smaller galaxies smashed into each other. But this process takes time. Spitzer's finding of massive galaxies in an era between 800 and 1,600 million years after the birth of our universe barely leaves enough time for the galaxies' roughly one hundred billion stars to have formed.

"It's really hard to form something so massive so quickly," said Josh Speagle, co-author of the study from Harvard University, Cambridge, Massachusetts. "So it's entirely possible that these galaxies have been forming stars continuously since the moment they were born."

Another explanation is that the first-ever galaxies got their foothold in the universe sooner than thought. Astronomers think the first galaxies formed around 500 million years after the Big Bang. If galaxies started forming earlier than this, by about 400 million years after the Big Bang, then they might have had the time needed to merge with other galaxies and ultimately grow into the behemoths found by Spitzer.

Follow-up observations with a host of telescopes are now being planned to figure out exactly how these galaxies got so big. Japan's Subaru telescope atop Mauna Kea in Hawaii will collect deep optical images of the galaxies over the course of several years.

The technical Astrophysical Journal Letters paper is online at