Spitzer Finds Organics and Water Where New Planets May Grow 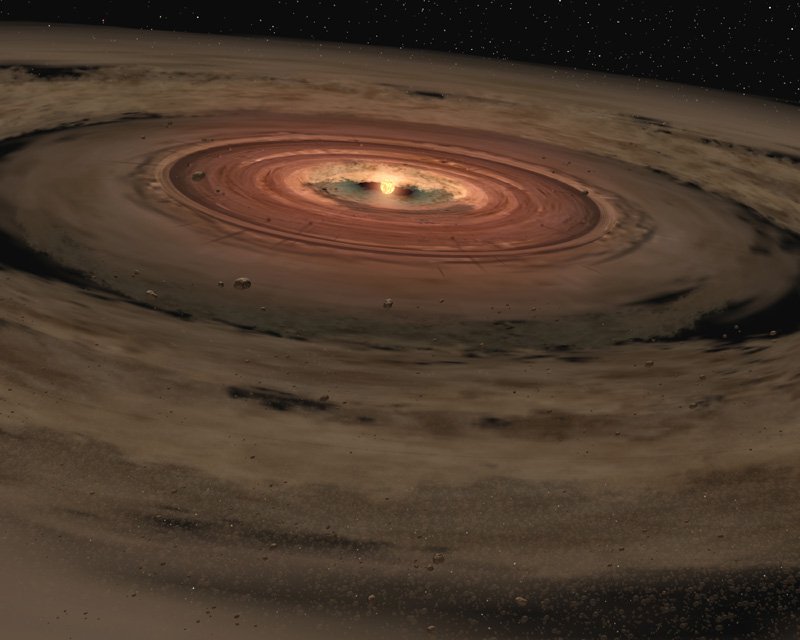 This artist's concept shows a very young star encircled by a disk of gas and dust, the raw materials from which rocky planets such as Earth are thought to form.› High-resolution JPEG (2.6Mb)
Credit: NASA/JPL-Caltech 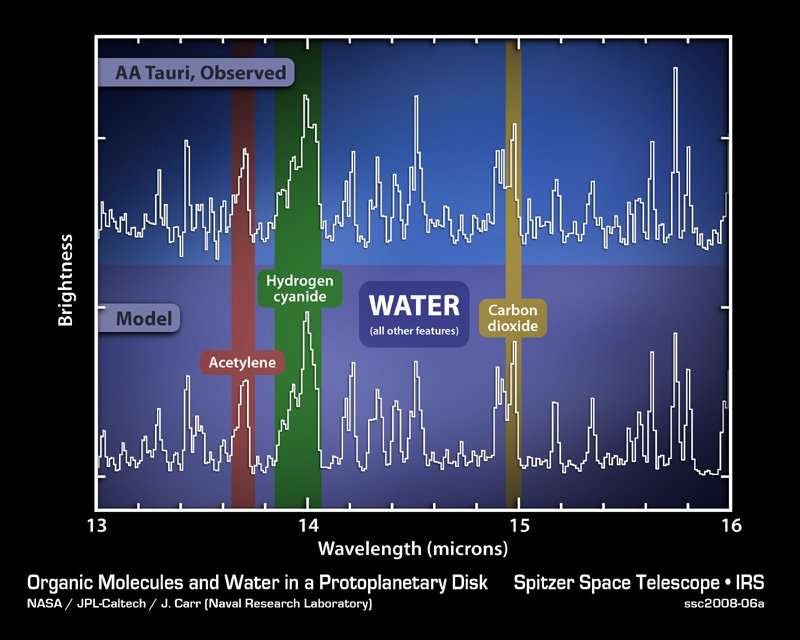 This plot of infrared data shows the signatures of water vapor and simple organic molecules in the disk of gas and dust surrounding a young star. › Full image and caption 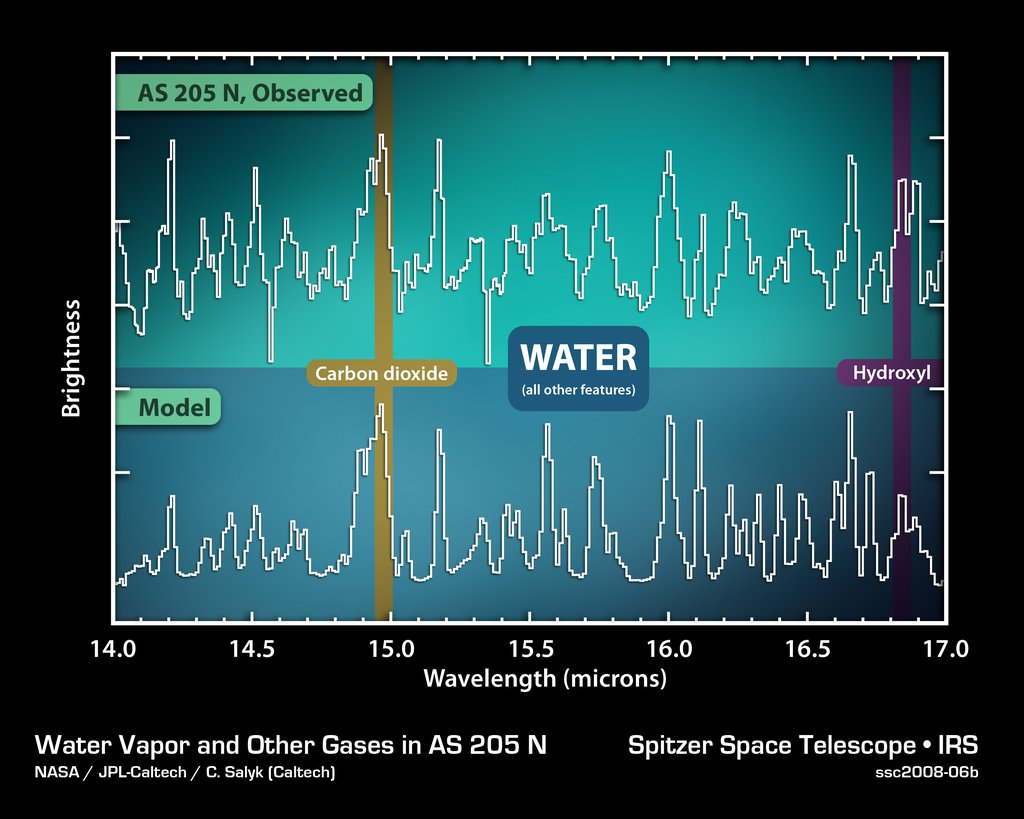 This plot of infrared data shows the strong signature of water vapor in the disk of gas and dust surrounding a young star. › Full image and caption

Researchers using NASA's Spitzer Space Telescope have discovered large amounts of simple organic gases and water vapor in a possible planet-forming region around an infant star, along with evidence that these molecules were created there.

Researchers using NASA's Spitzer Space Telescope have discovered large amounts of simple organic gases and water vapor in a possible planet-forming region around an infant star, along with evidence that these molecules were created there. They've also found water in the same zone around two other young stars.

By pushing the telescope's capabilities to a new level, astronomers now have a better view of the earliest stages of planetary formation, which may help shed light on the origins of our own solar system and the potential for life to develop in others. John Carr of the Naval Research Laboratory, Washington, and Joan Najita of the National Optical Astronomy Observatory, Tucson, Ariz., developed a new technique using Spitzer's infrared spectrograph to measure and analyze the chemical composition of the gases within protoplanetary disks. These are flattened disks of gas and dust that encircle young stars. Scientists believe they provide the building materials for planets and moons and eventually, over millions of years, evolve into orbiting planetary systems like our own.

"Most of the material within the disks is gas," said Carr, "but until now it has been difficult to study the gas composition in the regions where planets should form. Much more attention has been given to the solid dust particles, which are easier to observe." In their project, Carr and Najita took an in-depth look at the gases in the planet-forming region in the disk around the star AA Tauri. Less than a million years old, AA Tauri is a typical example of a young star with a protoplanetary disk.

With their new procedures, they were able to detect the minute spectral signatures for three simple organic molecules--hydrogen cyanide, acetylene and carbon dioxide--plus water vapor. In addition, they found more of these substances in the disk than are found in the dense interstellar gas called molecular clouds from which the disk originated. "Molecular clouds provide the raw material from which the protoplanetary disks are created," said Carr. "So this is evidence for an active organic chemistry going on within the disk, forming and enhancing these molecules."

Spitzer's infrared spectrograph detected these same organic gases in a protoplanetary disk once before. But the observation was dependent on the star's disk being oriented in just the right way. Now researchers have a new method for studying the primordial mix of gases in the disks of hundreds of young star systems.

Astronomers will be able to fill an important gap--they know that water and organics are abundant in the interstellar medium but not what happens to them after they are incorporated into a disk. "Are these molecules destroyed, preserved or enhanced in the disk?" said Carr. "Now that we can identify these molecules and inventory them, we will have a better understanding of the origins and evolution of the basic building blocks of life--where they come from and how they evolve." Carr and Najita's research results appear in the March 14 issue of Science.

Taking advantage of Spitzer's spectroscopic capabilities, another group of scientists looked for water molecules in the disks around young stars and found them--twice. "This is one of the very few times that water vapor has been directly shown to exist in the inner part of a protoplanetary disk--the most likely place for terrestrial planets to form," said Colette Salyk, a graduate student in geological and planetary sciences at the California Institute of Technology in Pasadena. She is the lead author on a paper about the results in the March 20 issue of Astrophysical Journal Letters.

Salyk and her colleagues used Spitzer to look at dozens of young stars with protoplanetary disks and found water in many. They honed in on two stars and followed up the initial detection of water with complementary high-resolution measurements from the Keck II Telescope in Hawaii. "While we don't detect nearly as much water as exists in the oceans on Earth, we see essentially only the disk's surface, so the implication is that the water is quite abundant," said Geoffrey Blake, professor of cosmochemistry and planetary sciences at Caltech and one of the paper's co-authors.

"This is a much larger story than just one or two disks," said Blake. "Spitzer can efficiently measure these water signatures in many objects, so this is just the beginning of what we will learn."

"With upcoming Spitzer observations and data in hand," Carr added, "we will develop a good understanding of the distribution and abundance of water and organics in planet-forming disks."