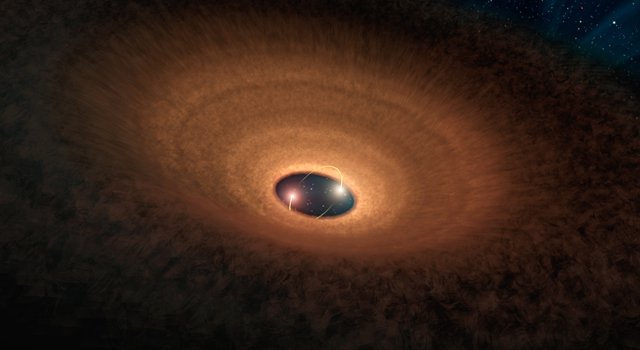 In this artist's impression, a disk of dusty material leftover from star formation girds two young stars like a hula hoop. As the two stars whirl around each other, they periodically peek out from the disk, making the system appear to "blink" every 93 days.› Full image and caption
Credit: NASA/JPL-Caltech

A pair of stars peeks out from a tilted disk twirling around them, allowing astronomers to monitor their "blinking" pattern.

Astronomers using NASA's Spitzer Space Telescope have spotted a young stellar system that "blinks" every 93 days. Called YLW 16A, the system likely consists of three developing stars, two of which are surrounded by a disk of material left over from the star-formation process.

As the two inner stars whirl around each other, they periodically peek out from the disk that girds them like a hula hoop. The hoop itself appears to be misaligned from the central star pair, probably due to the disrupting gravitational presence of the third star orbiting at the periphery of the system. The whole system cycles through bright and faint phases, with the central stars playing a sort of cosmic peek-a-boo as the tilted disk twirls around them. It is believed that this disk should go on to spawn planets and the other celestial bodies that make up a solar system.

Spitzer observed infrared light from YLW 16A, emitted by the warmed gas and dust in the disk that still swathes the young stars. Other observations came from the ground-based 2MASS survey, as well as from the NACO instrument at the European Southern Observatory's Very Large Telescope in Chile.

YLW 16A is the fourth example of a star system known to blink in such a manner, and the second in the same star-forming region Rho Ophiuchus. The finding suggests that these systems might be more common than once thought. Blinking star systems with warped disks offer scientists a way to study how planets form in these environments. The planets can orbit one or both of the stars in the binary star system. The famous science fictional planet Tatooine in "Star Wars" orbits two stars, hence its double sunsets. Such worlds are referred to as circumbinary planets. Astronomers can record how light is absorbed by planet-forming disks during the bright and faint phases of blinking stellar systems, which in turn reveals information about the materials that comprise the disk.

"These blinking systems offer natural probes of the binary and circumbinary planet formation process," said Peter Plavchan, a scientist at the NASA Exoplanet Science Institute and Infrared Processing and Analysis Center at the California Institute of Technology, Pasadena, Calif., and lead author of a new paper accepted for publication in Astronomy & Astrophysics.