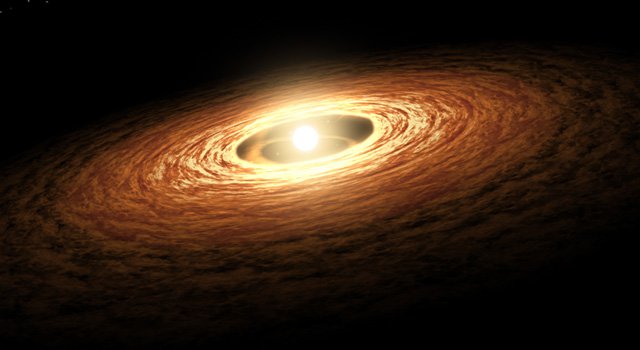 The image shows a young sun-like star encircled by its planet-forming disk of gas and dust. The silicate that makes up most of the dust would have begun as non-crystallized, amorphous particles.› Related animation
Credit: NASA/JPL-Caltech 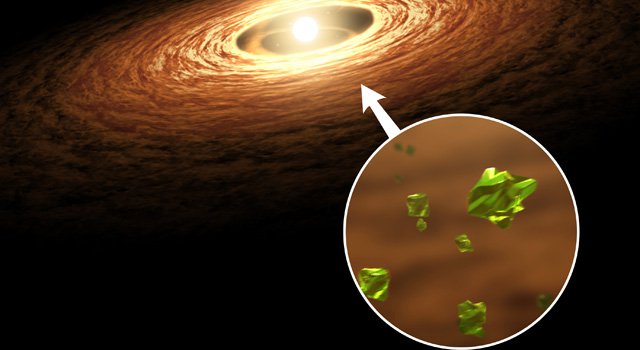 This artist's concept illustrates how silicate crystals like those found in comets can be created by an outburst from a growing star. › Full image and caption

Scientists have long wondered how tiny silicate crystals, which need sizzling high temperatures to form, have found their way into frozen comets, born in the deep freeze of the solar system's outer edges.

Scientists have long wondered how tiny silicate crystals, which need sizzling high temperatures to form, have found their way into frozen comets, born in the deep freeze of the solar system's outer edges. The crystals would have begun as non-crystallized silicate particles, part of the mix of gas and dust from which the solar system developed.

A team of astronomers believes they have found a new explanation for both where and how these crystals may have been created, by using NASA's Spitzer Space Telescope to observe the growing pains of a young, sun-like star. Their study results, which appear in the May 14 issue of Nature, provide new insight into the formation of planets and comets.

The researchers from Germany, Hungary and the Netherlands found that silicate appears to have been transformed into crystalline form by an outburst from a star. They detected the infrared signature of silicate crystals on the disk of dust and gas surrounding the star EX Lupi during one of its frequent flare-ups, or outbursts, seen by Spitzer in April 2008. These crystals were not present in Spitzer's previous observations of the star's disk during one of its quiet periods.

"We believe that we have observed, for the first time, ongoing crystal formation," said one of the paper's authors, Attila Juhasz of the Max-Planck Institute for Astronomy in Heidelberg, Germany. "We think that the crystals were formed by thermal annealing of small particles on the surface layer of the star's inner disk by heat from the outburst. This is a completely new scenario about how this material could be created."

Annealing is a process in which a material is heated to a certain temperature at which some of its bonds break and then re-form, changing the material's physical properties. It is one way that silicate dust can be transformed into crystalline form.

Scientists previously had considered two different possible scenarios in which annealing could create the silicate crystals found in comets and young stars' disks. In one scenario, long exposure to heat from an infant star might anneal some of the silicate dust inside the disk's center. In the other, shock waves induced by a large body within the disk might heat dust grains suddenly to the right temperature to crystallize them, after which the crystals would cool nearly as quickly.

What Juhasz and his colleagues found at EX Lupi didn't fit either of the earlier theories. "We concluded that this is a third way in which silicate crystals may be formed with annealing, one not considered before," said the paper's lead author, Peter Abraham of the Hungarian Academy of Sciences' Konkoly Observatory, Budapest, Hungary.

EX Lupi is a young star, possibly similar to our sun four or five billion years ago. Every few years, it experiences outbursts, or eruptions, that astronomers think are the result of the star gathering up mass that has accumulated in its surrounding disk. These flare-ups vary in intensity, with really big eruptions occurring every 50 years or so.

The researchers observed EX Lupi with Spitzer's infrared spectrograph in April 2008. Although the star was beginning to fade from the peak of a major outburst detected in January, it was still 30 times brighter than when it was quiet. When they compared this new view of the erupting star with Spitzer measurements made in 2005 before the eruption began, they found significant changes.

In 2005, the silicate on the surface of the star's disk appeared to be in the form of amorphous grains of dust. In 2008, the spectrum showed the presence of crystalline silicate on top of amorphous dust. The crystals appear to be forsterite, a material often found in comets and in protoplanetary disks. The crystals also appear hot, evidence that they were created in a high-temperature process, but not by shock heating. If that were the case, they would already be cool.

"At outburst, EX Lupi became about 100 times more luminous," said Juhasz. "Crystals formed in the surface layer of the disk but just at the distance from the star where the temperature was high enough to anneal the silicate--about 1,000 Kelvin (1,340 degrees Fahrenheit)--but still lower than 1,500 Kelvin (2,240 degrees Fahrenheit). Above that, the dust grains will evaporate." The radius of this crystal formation zone, the researchers note, is comparable to that of the terrestrial-planet region in the solar system.

"These observations show, for the first time, the actual production of crystalline silicates like those found in comets and meteorites in our own solar system," said Spitzer Project Scientist Michael Werner of NASA's Jet Propulsion Laboratory, Pasadena, Calif. "So what we see in comets today may have been produced by repeated bursts of energy when the sun was young."