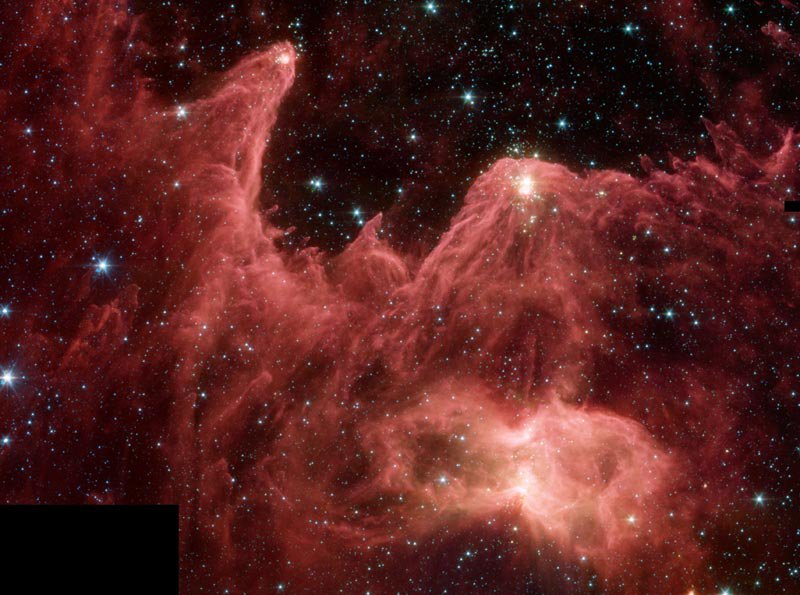 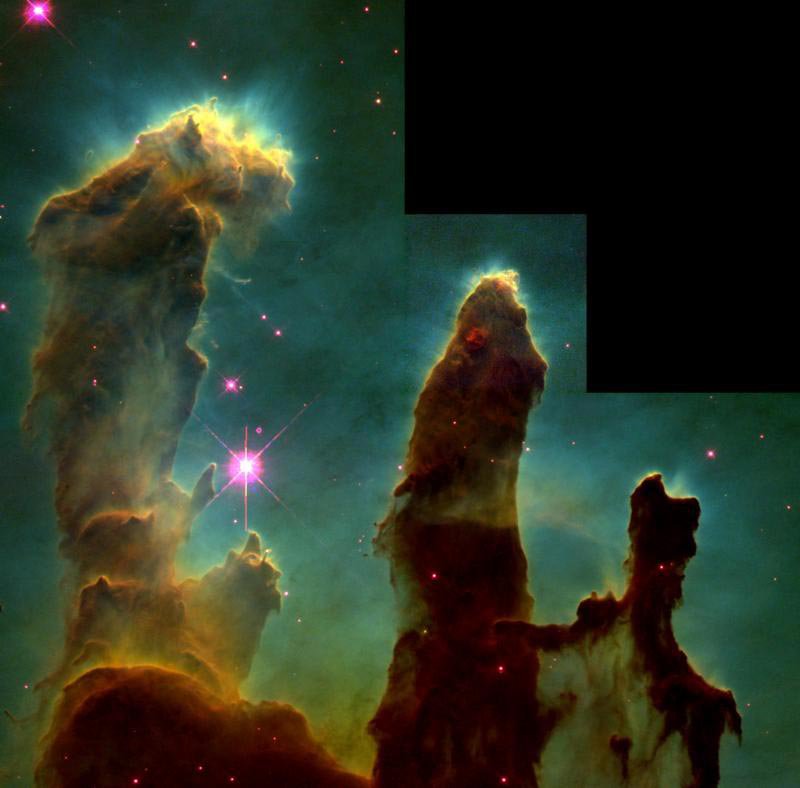 The new Spitzer picture (above) is reminiscent of Hubble's iconic visible-light image of the Eagle Nebula, which also features a star-forming region, or nebula, that is being sculpted into pillars by radiation and winds from hot, massive stars.+ Full caption
Credit: NASA/ESA/STScI

A new image from NASA's Spitzer Space Telescope reveals billowing mountains of dust ablaze with the fires of stellar youth.

A new image from NASA's Spitzer Space Telescope reveals billowing mountains of dust ablaze with the fires of stellar youth.

Captured by Spitzer's infrared eyes, the majestic image resembles the iconic "Pillars of Creation" picture taken of the Eagle Nebula in visible light by NASA's Hubble Space Telescope in 1995. Both views feature star-forming clouds of cool gas and dust that have been sculpted into pillars by radiation and winds from hot, massive stars.

The Spitzer image, which can be found at http://www.spitzer.caltech.edu/Media, shows the eastern edge of a region known as W5, in the Cassiopeia constellation 7,000 light-years away. This region is dominated by a single massive star, whose location outside the pictured area is "pointed out" by the finger-like pillars. The pillars themselves are colossal, together resembling a mountain range. They are more than 10 times the size of those in the Eagle Nebula.

The largest of the pillars observed by Spitzer entombs hundreds of never-before-seen embryonic stars, and the second largest contains dozens.

"We believe that the star clusters lighting up the tips of the pillars are essentially the offspring of the region's single, massive star," said Dr. Lori Allen, lead investigator of the new observations, from the Harvard-Smithsonian Center for Astrophysics, Cambridge, Mass. "It appears that radiation and winds from the massive star triggered new stars to form."

Spitzer was able to see the stars forming inside the pillars thanks to its infrared vision. Visible-light images of this same region show dark towers outlined by halos of light. The stars inside are cloaked by walls of dust. But infrared light coming from these stars can escape through the dust, providing astronomers with a new view.

"With Spitzer, we can not only see the stars in the pillars, but we can estimate their age and study how they formed," said Dr. Joseph Hora, a co-investigator, also from the Harvard-Smithsonian Center for Astrophysics.

The W5 region and the Eagle Nebula are referred to as high-mass star-forming regions. They start out as thick and turbulent clouds of gas and dust that later give birth to families of stars, some of which are more than 10 times more massive than the sun. Radiation and winds from the massive stars subsequently blast the cloudy material outward, so that only the densest pillar-shaped clumps of material remain. The process is akin to the formation of desert mesas, which are made up of dense rock that resisted water and wind erosion.

According to theories of triggered star formation, the pillars eventually become dense enough to spur the birth of a second generation of stars. Those stars, in turn, might also trigger successive generations. Astronomers do not know if the sun, which formed about five billion years ago, was originally a member of this type of extended stellar family.

Allen and her colleagues believe they have found evidence for triggered star formation in the new Spitzer image. Though it is possible the clusters of stars in the pillars are siblings of the single massive star, the astronomers say the stars are more likely its children.