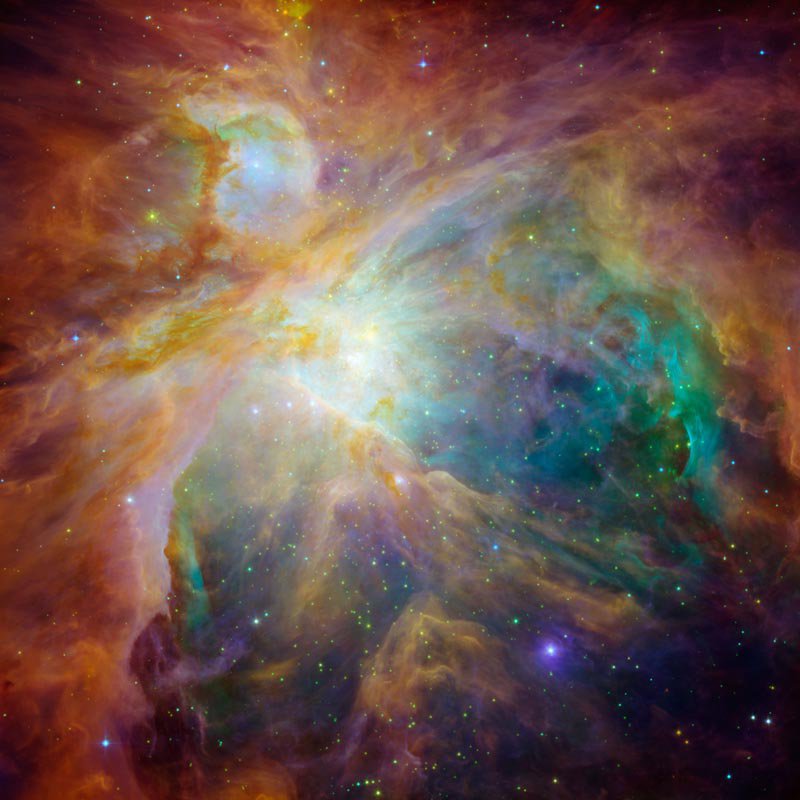 A new image from NASA's Spitzer and Hubble Space Telescopes looks more like an abstract painting than a cosmic snapshot.

A new image from NASA's Spitzer and Hubble Space Telescopes looks more like an abstract painting than a cosmic snapshot. The masterpiece shows the Orion nebula in an explosion of infrared, ultraviolet and visible-light colors. It was "painted" by hundreds of baby stars on a canvas of gas and dust, with intense ultraviolet light and strong stellar winds as brushes.

At the heart of the artwork is a set of four monstrously massive stars, collectively called the Trapezium. These behemoths are approximately 100,000 times brighter than our sun. Their community can be identified as the yellow smudge near the center of the composite.

The swirls of green were revealed by Hubble's ultraviolet and visible-light detectors. They are hydrogen and sulfur gases heated by intense ultraviolet radiation from the Trapezium's stars.

Additional stars in Orion are sprinkled throughout the image in a rainbow of colors. Spitzer exposed infant stars deeply embedded in a cocoon of dust and gas (orange-yellow dots). Hubble found less embedded stars (specks of green) and stars in the foreground (blue). Stellar winds from clusters of newborn stars scattered throughout the cloud etched all the well-defined ridges and cavities.

Located nearly 1,500 light-years away from Earth, the Orion nebula is the brightest spot in the sword of the hunter constellation. The cosmic cloud is also our closest massive star-formation factory, and astronomers suspect that it contains about 1,000 young stars.

The Orion constellation can be seen in the fall and winter night skies from northern latitudes. The constellation's nebula is invisible to the unaided eye, but can be resolved with binoculars or small telescopes.

The Hubble Space Telescope is a project of international cooperation between NASA and the European Space Agency. The Space Telescope Science Institute in Baltimore conducts Hubble science operations. The Institute is operated for NASA by the Association of Universities for Research in Astronomy, Inc., Washington.