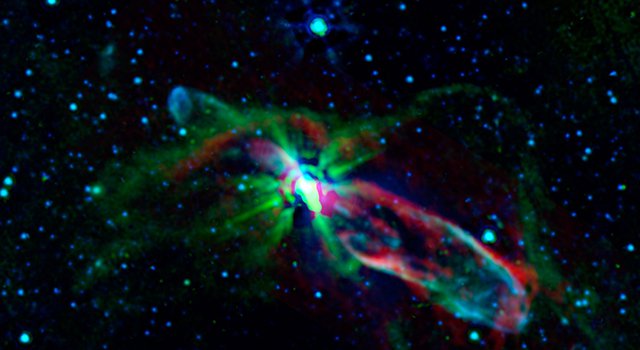 Combined observations from NASA's Spitzer Space Telescope and the newly completed Atacama Large Millimeter/submillimeter Array (ALMA) in Chile have revealed the throes of stellar birth, as never before, in the well-studied object known as HH 46/47.› Full image and caption
Credit: NASA/JPL-Caltech/ALMA

Supersonic jets burst out of a young star's cocoon in a new image from NASA's Spitzer Space Telescope and the Atacama Large Millimeter/submillimeter Array (ALMA).

It's a bouncing baby . . . star! Combined observations from NASA's Spitzer Space Telescope and the newly completed Atacama Large Millimeter/submillimeter Array (ALMA) in Chile have revealed the throes of stellar birth as never before in the well-studied object known as HH 46/47.

Herbig-Haro (HH) objects form when jets shot out by newborn stars collide with surrounding material, producing small, bright, nebulous regions. To our eyes, the dynamics within many HH objects are obscured by enveloping gas and dust. But the infrared and submillimeter wavelengths of light seen by Spitzer and ALMA, respectively, pierce the dark cosmic cloud around HH 46/47 to let us in on the action.

The Spitzer observations show twin supersonic jets emanating from the central star that blast away surrounding gas and set it alight into two bubbly lobes. HH 46/47 happens to sit on the edge of its enveloping cloud in such a way that the jets pass through two differing cosmic environments. The rightward jet, heading into the cloud, is plowing through a "wall" of material, while the leftward jet's path out of the cloud is relatively unobstructed, passing through less material. This orientation serves scientists well by offering a handy compare-and-contrast setup for how the outflows from a developing star interact with their surroundings.

"Young stars like our sun need to remove some of the gas collapsing in on them to become stable, and HH 46/47 is an excellent laboratory for studying this outflow process," said Alberto Noriega-Crespo, a scientist at the Infrared Processing and Analysis Center at the California Institute of Technology, Pasadena, Calif. "Thanks to Spitzer, the HH 46/47 outflow is considered one of the best examples of a jet being present with an expanding bubble-like structure."

Noriega-Crespo led the team that began studying HH 46/47 with Spitzer nearly 10 years ago when the telescope first began observing the heavens. Now, using a new image processing technique developed in the past few years, he and his colleagues have been able to render HH 46/47 in higher resolution.

Meanwhile, the fresh views of HH 46/47 by ALMA have revealed that the gas in the lobes is expanding faster than previously thought. This faster expansion has an influence on the overall amount of turbulence in the gaseous cloud that originally spawned the star. In turn, the extra turbulence could have an impact on whether and how other stars might form in this gaseous, dusty, and thus fertile, ground for star-making.

A team led by Hector Arce at Yale University, New Haven, Conn., carried out the ALMA observations and their analysis was published recently in The Astrophysical Journal.

The Atacama Large Millimeter/submillimeter Array (ALMA), an international astronomy facility, is a partnership of Europe, North America and East Asia in cooperation with the Republic of Chile.