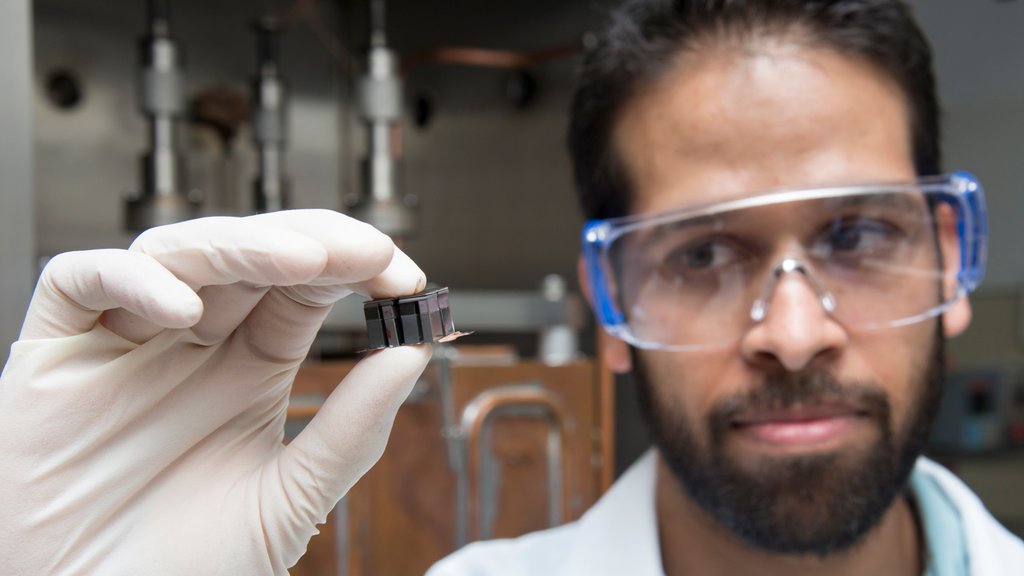 Samad Firdosy, a materials engineer at JPL, holds a thermoelectric module made of four thermocouples, which are devices that help turn heat into electricity. Thermocouples are used in household heating applications, as well as power systems for spacecraft.
Credit: NASA/JPL-Caltech 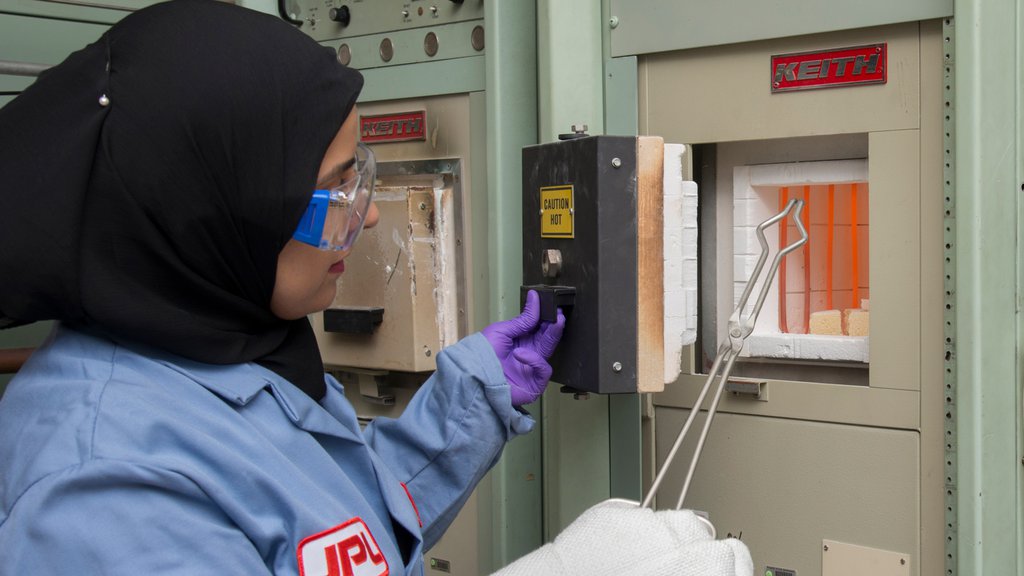 Sabah Bux, a technologist at JPL, is shown using a furnace in her work to develop thermoelectric materials, which convert heat into electricity.
Credit: NASA/JPL-Caltech

A cutting-edge development in spacecraft power systems is a powerful material with an unfamiliar name: skutterudite.

No extension cord is long enough to reach another planet, and there's no spacecraft charging station along the way. That's why researchers are hard at work on ways to make spacecraft power systems more efficient, resilient and long-lasting.

"NASA needs reliable long-term power systems to advance exploration of the solar system," said Jean-Pierre Fleurial, supervisor for the thermal energy conversion research and advancement group at NASA's Jet Propulsion Laboratory, Pasadena, California. "This is particularly important for the outer planets, where the intensity of sunlight is only a few percent as strong as it is in Earth orbit."

A cutting-edge development in spacecraft power systems is a class of materials with an unfamiliar name: skutterudites (skut-ta-RU-dites). Researchers are studying the use of these advanced materials in a proposed next-generation power system called an eMMRTG, which stands for Enhanced Multi-Mission Radioisotope Thermoelectric Generator.

What is an RTG?

The United States first launched a radioisotope thermoelectric generator (RTG) into space on a satellite in 1961. RTGs have powered NASA's twin Voyager probes since their launch in 1977; more than 10 billion miles (16 billion kilometers) away, the Voyagers are the most distant spacecraft from Earth and are still going. RTGs have enabled many other missions that have sent back a wealth of science results, including NASA's Mars Curiosity rover and the New Horizons mission, which flew by Pluto in 2015.

The new eMMRTG would provide 25 percent more power than Curiosity's generator at the start of a mission, according to current analyses. Additionally, since skutterudites naturally degrade more slowly that the current materials in the MMRTG, a spacecraft outfitted with an eMMRTG would have at least 50 percent more power at the end of a 17-year design life than it does today.

"Having a more efficient thermoelectric system means we'd need to use less plutonium. We could go farther, for longer and do more," Bux said.

The defining new ingredients in the proposed eMMRTG are materials called skutterudites, which have unique properties that make them especially useful for power systems. These materials conduct electricity like metal, but heat up like glass, and can generate sizable electrical voltages.

Materials with all of these characteristics are hard to come by. A copper pot, for example, is an excellent conductor of electricity, but gets very hot quickly. Glass, on the other hand, insulates against heat well, but it can't conduct electricity. Neither of these properties are appropriate in a thermoelectric material, which converts heat into electricity.

"We needed to design high temperature compounds with the best mix of electrical and heat transfer properties," said Sabah Bux, a technologist at JPL who works on thermoelectric materials. "Skutterudites, with their complex structures composed of heavy atoms like antimony, allow us to do that."

THERMOCOUPLES
What is a thermoelectric material?

Thermoelectric materials are materials that can convert a temperature difference into electricity, or vice versa.

What is a thermocouple?

A conventional thermocouple is made of two different thermoelectric materials joined together at one "shoe," or end, where its temperature is measured. When you heat up a thermocouple, the difference in the conductivity of the materials results in one metal becoming hotter than the other, and causes the temperature of the joined end to change. This temperature difference creates a voltage (the force with which electrons flow through the material), and converts a portion of the transferred heat into electricity.

How do thermocouples work?

Thermocouples are in every home: They measure the temperature in your oven and control your water heater. Most household thermocouples are inefficient: they produce a voltage so small, it produces almost no electrical current. By contrast skutterudites are a lot more efficient: They require a smaller temperature difference to produce useful electricity.

NASA is studying thermocouples made out of skutterudites that have a flat top and two "legs," somewhat like the iconic Stonehenge stone monuments. Heat transfers across the thermocouple from a high-temperature heat source to a suitable heat 'sink' (such as cold water). An electrical current is produced between the hot end (the flat top) and the cold end (the legs) of the thermocouple.

"It's as though there are a lot of people in a room where one side is hot and one side is cold," said JPL's Sabah Bux. "The people, which represent the electrical charges, will move from the hot side to the cold side. That movement is electricity."

The thermocouples are joined end-to-end in one long circuit - the electrical current goes up, over and down each thermocouple, producing useful power. Devices outfitted in this way can take advantage of a variety of heat sources, ranging in temperature from 392 to more than 1832 degrees Fahrenheit (200 to more than 1000 degrees Celsius).

In Curiosity's power system, the Multi Mission RTG (MMRTG), 768 thermocouples encircle a central can-like structure, all facing the same direction towards the heat source, at the center of the generator. The enhanced MMRTG (eMMRTG) would have the same number of thermocouples, but all would be made from skutterudite material instead of the alloys of tellurium currently used.

"Only minimal changes to the existing MMRTG design are needed to get these results," Fleurial said. A group of about two dozen people at JPL is dedicated to working on these advanced materials and testing the resulting thermocouple prototypes.

The new skutterudite-based thermocouples passed their first major NASA review in late 2015. If they pass further reviews in 2017 and 2018, the first eMMRTG using them could fly aboard NASA's next New Frontiers-class mission.

There are many potential applications for these advanced thermoelectric materials here on Earth.

"In situations where waste heat is emitted, skutterudite materials could be used to improve efficiency and convert that heat into useful electricity," said Thierry Caillat, project leader for the technology maturation project at JPL.

For example, exhaust heat from a car could be converted into electricity and fed back into the vehicle, which could be used to charge batteries and reduce fuel use. Industrial processes that require high temperatures, such as ceramic and glass processing, could also use skutterudite materials to make use of waste heat. In 2015, JPL licensed patents on these high-temperature thermoelectric materials to a company called Evident Technologies, Troy, New York.

"Over the last 20 years, the field of thermoelectrics has come into being and blossomed, especially at JPL," said Fleurial. "There's a lot of great science happening in this area. We're excited to explore the idea of taking these materials to space, and benefitting U.S. industry along the way."

JPL's work to develop higher-efficiency thermoelectric materials is carried out in partnership with the U.S. Department of Energy (DOE), Teledyne Energy Systems and Aerojet Rocketdyne, and is funded by NASA's Radioisotope Power System program, which is managed by NASA Glenn Research Center in Cleveland. The spaceflight hardware is produced by Teledyne Energy Systems and Aerojet Rocketdyne under a contract held by the DOE, which fuels, completes final assembly and owns the end item. Caltech manages JPL for NASA.