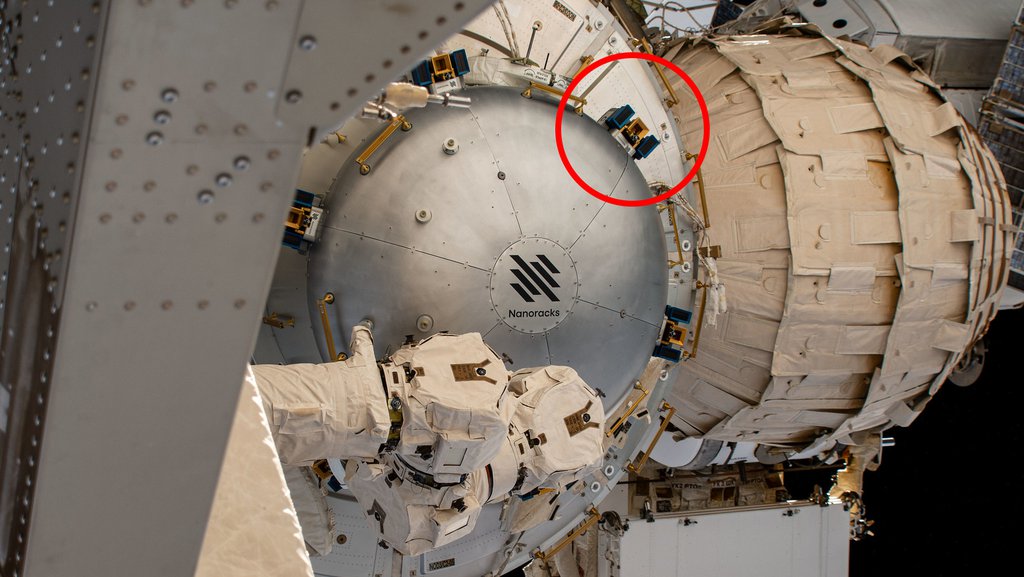 SEAQUE will be hosted on the International Space Station by the Nanoracks Bishop airlock. The blue-and-gold brackets attached to the side of the airlock are for external payloads. The technology demonstration will be installed at one of those sites.

The NASA-funded experiment will test two technologies that could eventually enable quantum computers to communicate with each other no matter where they are located.

A tiny experiment launching to the International Space Station later this year could set the stage for a future global quantum network. Called the Space Entanglement and Annealing QUantum Experiment (or SEAQUE), the milk-carton-size technology demonstration will test two communications technologies in the harsh environment of space.

Quantum computers hold the promise of operating millions of times faster than conventional computers, and distributed quantum sensors may lead to new understandings of Earth and our place in the universe by measuring minute changes in gravity. But for quantum computers or quantum sensors to communicate, they will require a dedicated communications network. A key component of this network will be space “nodes” that can receive and transmit quantum data to and from the ground via free-space optical communications.

SEAQUE sets out to prove the viability of technologies that could enable orbiting nodes to securely connect quantum transmitters and receivers over great distances. To do that, these nodes will need to produce and detect pairs of entangled photons. Eventually, transmitting such photons to quantum computers on the ground could provide the foundation for quantum cloud computing – the means to exchange and process quantum data regardless of where the computers are located.

Once attached to the space station’s exterior, SEAQUE will also test a technique to help space-based nodes “self-heal” from radiation damage, a continual challenge of maintaining delicate instruments in space.

Like the network it’s intended to enable, the project is global. The SEAQUE collaboration includes scientists and students from the University of Illinois Urbana-Champaign, who are leading the project; the University of Waterloo in Ontario, Canada; National University of Singapore; Montana-based industrial partner AdvR, Inc.; Texas-based commercial space systems provider Nanoracks; and JPL.

The Power of Entanglement

Pairs of entangled photons are so intimately connected that measuring one immediately affects the results of measuring the other, even when separated by a large distance. This is a fundamental characteristic of quantum mechanical systems. SEAQUE’s entangled-photon source splits high-energy photons into pairs of entangled “daughter” photons. Those daughter photons are then counted and their quantum properties are measured by the instrument’s internal detectors.

Whereas other space-based quantum experiments have depended on bulk optics (which focus light into a special crystal) to generate entangled photons, SEAQUE relies on an integrated source of entangled photons using a waveguide – a first for spacecraft. A waveguide is a microscopic structure that acts like an expressway for photons, directing their transmission with little loss of the quantum state.

“SEAQUE will demonstrate a new and never-before-flown entanglement source based on integrated optics,” said Paul Kwiat, the project’s principal investigator at the University of Illinois Urbana-Champaign. “Such a source is inherently much smaller, more robust, and more efficient at producing photon pairs than the bulk optic entanglement sources used in previous space experiments.”

For example, where those bulk optics require delicate optical realignment by an operator on the ground after being shaken up during launch, SEAQUE’s optics will not.

“If you’re building a global quantum network, connecting hundreds of quantum ground stations on different continents, you can’t afford to have a person-in-the-loop keeping the sources at each of the nodes in optical alignment,” said Mohageg. “A monolithic waveguide-based source like the one SEAQUE is going to fly will be a huge advance toward a scalable, global quantum information network.”

The technology demonstration’s reliability could get another boost if SEAQUE proves it can also repair damage inflicted on it by radiation.

Quantum communications nodes will require highly sensitive detectors to receive the single-photon quantum signals from Earth’s surface. As high-energy particles, or radiation, from space hit the nodes’ detectors, they will create defects over time. These defects can manifest themselves as “dark counts” in a detector’s output, creating noise that will eventually overwhelm any quantum signal from the ground. Left unchecked, space radiation will ultimately degrade such detectors so much that they will need to be replaced regularly, impeding the viability of a global quantum communications network.

While detecting signals from Earth is beyond the scope of this technology demonstration, SEAQUE will use its detector array to count the photons generated by its entanglement source. And SEAQUE will use a bright laser to periodically repair radiation-induced damage that will affect the detector array’s count – another first.

“In tests on the ground, we found that this technique causes the defects in the lattice to ‘bubble away’ – a process known as annealing – thereby reducing detector noise and potentially prolonging the life of in-space quantum nodes, facilitating a robust global network,” said Kwiat.

SEAQUE will be hosted on the space station by the Bishop airlock, owned and operated by Nanoracks. Nanoracks is also providing the mission operations services and coordinating the launch services. The integrated optical entangled photon source for SEAQUE is developed by AdvR, Inc. Expected to launch no earlier than August 2022, the technology demonstration is funded by NASA’s Biological and Physical Sciences Division within the agency’s Science Mission Directorate.