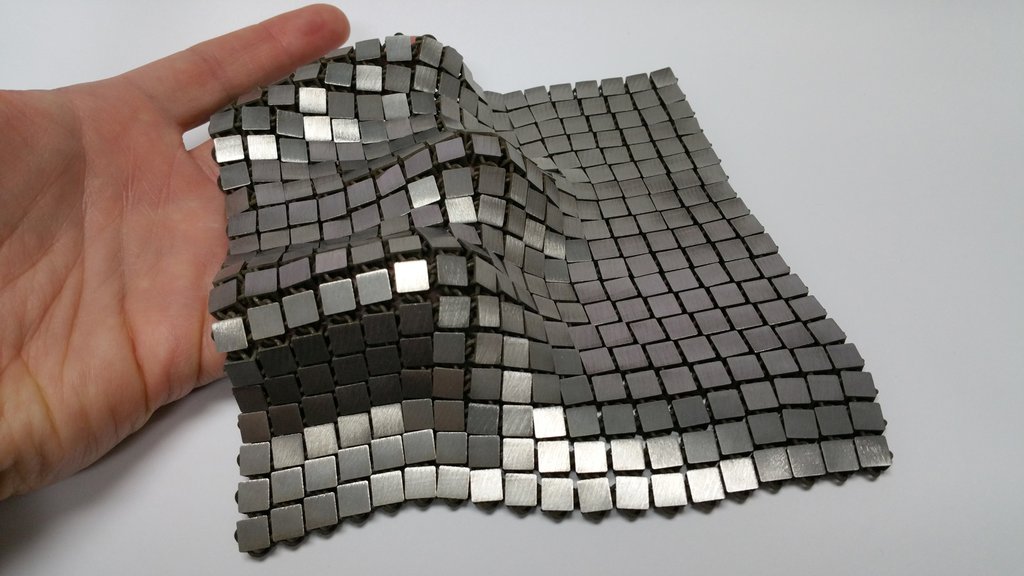 This metallic "space fabric" was created using 3-D printed techniques that add different functionality to each side of the material.
Credit: NASA/JPL-Caltech 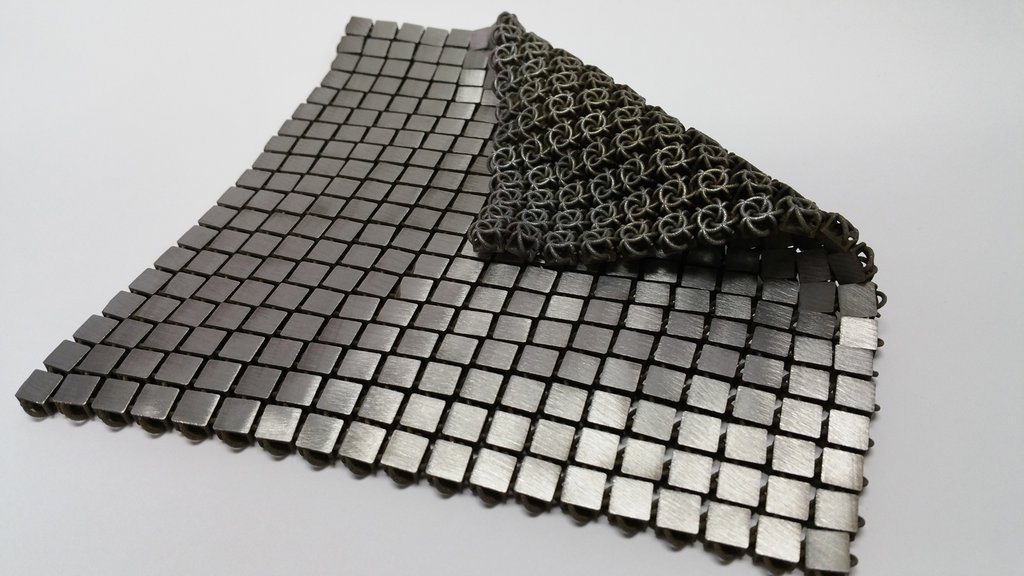 Another example of a 3-D-printed metallic "space fabric." The bottom and top sides of the fabric are designed to have different functionality.
Credit: NASA/JPL-Caltech

Raul Polit Casillas grew up around fabrics. His mother is a fashion designer in Spain, and, at a young age, he was intrigued by how materials are used for design.

Now, as a systems engineer at NASA's Jet Propulsion Laboratory in Pasadena, California, he is still very much in the world of textiles. He and his colleagues are designing advanced woven metal fabrics for use in space.

These fabrics could potentially be useful for large antennas and other deployable devices, because the material is foldable and its shape can change quickly. The fabrics could also eventually be used to shield a spacecraft from meteorites, for astronaut spacesuits, or for capturing objects on the surface of another planet. One potential use might be for an icy moon like Jupiter's Europa, where these fabrics could insulate the spacecraft. At the same time, this flexible material could fold over uneven terrain, creating "feet" that won't melt the ice under them.

The prototypes that Polit Casillas and colleagues have created look like chain mail, with small silver squares strung together. But these fabrics were not sewn by hand; instead, they were "printed," created in one piece with advanced technologies.

"We call it '4-D printing' because we can print both the geometry and the function of these materials," said Polit Casillas. "If 20th Century manufacturing was driven by mass production, then this is the mass production of functions."

Fabricating spacecraft designs can be complex and costly, said Andrew Shapiro-Scharlotta of JPL, whose office funds research for early-stage technologies like the space fabric. He said that adding multiple functions to a material at different stages of development could make the whole process cheaper. It could also open the door to new designs.

"We are just scratching the surface of what's possible," Shapiro-Scharlotta said. "The use of organic and non-linear shapes at no additional costs to fabrication will lead to more efficient mechanical designs."

The space fabrics have four essential functions: reflectivity, passive heat management, foldability and tensile strength. One side of the fabric reflects light, while the other absorbs it, acting as a means of thermal control. It can fold in many different ways and adapt to shapes while still being able to sustain the force of pulling on it.

The JPL team not only wants to try out these fabrics in space someday, they want to be able to manufacture them in space, too.

Separate from his space fabric research, Polit Casillas co-leads JPL's Atelier, a workshop that does rapid prototyping of advanced concepts and systems. This fast-paced, collaborative environment develops different technologies and infuses them into new concepts, one of which is 4-D printing.

In the distant future, Polit Casillas said, astronauts might be able to print materials as they're needed -- and even recycle old materials, breaking them down and reusing them. Conservation is critical when you're trapped in space with just the resources you take with you.

But it would also be critical to think about new forms. Print a single plate of aluminum, and it has limited functionality. Print the same plate using a heat-radiating design, and suddenly it's more useful. Spacecraft housing could have different functionality on its outsides and insides, becoming more than just structural.

"I can program new functions into the material I'm printing," Polit Casillas said. "That also reduces the amount of time spent on integration and testing. You can print, test and destroy material as many times as you want."

This kind of design-based thinking could revolutionize the way spacecraft are engineered. Instead of having to assemble something with dozens of parts, all of which create potential points of failure, the spacecraft of the future could be created "whole cloth" -- and with added function, as well.