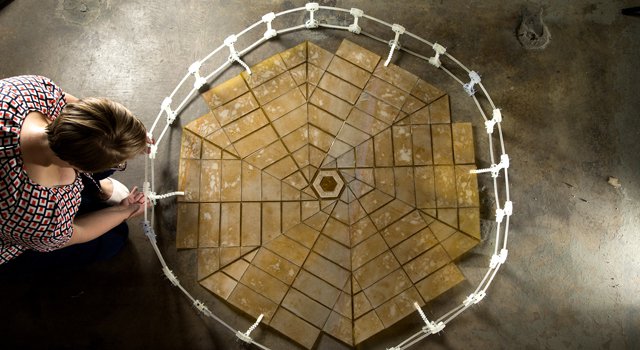 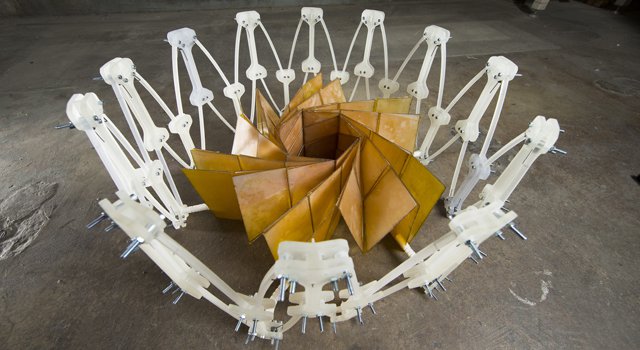 Researchers at NASA's Jet Propulsion Laboratory, Pasadena, California, and Brigham Young University, Provo, Utah, collaborated to construct a prototype of a solar panel array that folds up in the style of origami, to make for easier deployment. Image copyright BYU Photo 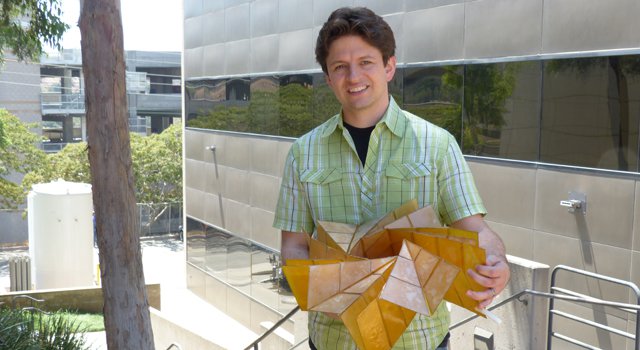 Brian Trease, a researcher at NASA's Jet Propulsion Laboratory in Pasadena, holds a prototype of a solar panel array that folds up in the style of origami.
Credit: NASA/JPL-Caltech

Origami has been a hot topic in technology recently. Brian Trease at NASA's Jet Propulsion Laboratory has been thinking about how it could be used in spacecraft.

As a high school student at a study program in Japan, Brian Trease would fold wrappers from fast-food cheeseburgers into cranes. He loved discovering different origami techniques in library books.

Today, Trease, a mechanical engineer at NASA's Jet Propulsion Laboratory in Pasadena, California, thinks about how the principles of origami could be used for space-bound devices.

"This is a unique crossover of art and culture and technology," he said.

Trease partnered with researchers at Brigham Young University in Provo, Utah, to pursue the idea that spacecraft components could be built effectively by implementing origami folds. Shannon Zirbel, a doctoral student at BYU, spent two summers at JPL working on these ideas, supported by the NASA Technology Research Fellowship, with Trease as her research collaborator.

Researchers say origami could be useful one day in utilizing space solar power for Earth-based purposes. Imagine an orbiting power plant that wirelessly beams power down to Earth using microwaves. Sending the solar arrays up to space would be easy, Trease said, because they could all be folded and packed into a single rocket launch, with "no astronaut assembly required."

Panels used in space missions already incorporate simple folds, collapsing like a fan or an accordion. But Trease and colleagues are interested in using more intricate folds that simplify the overall mechanical structure and make for easier deployment.

Last year, Zirbel and Trease collaborated with origami expert Robert Lang and BYU professor Larry Howell to develop a solar array that folds up to be 8.9 feet (2.7 meters) in diameter. Unfold it, and you've got a structure 82 feet (25 meters) across. Their 1/20th-scale tabletop prototype expands to a deployed diameter of 4.1 feet (1.25 meters).

One technique that has been used for an origami-inspired solar array is called a Miura fold. This well-known origami fold was invented by Japanese astrophysicist Koryo Miura. When you open the structure, it appears to be divided evenly into a checkerboard of parallelograms.

With this particular fold, there's only one way to open or close it: Pull on one corner and -- voila -- the whole thing is open with minimal effort. The mechanical structure of a device that folds this way is greatly simplified because only one input is required to deploy it.

Miura intended this fold for solar arrays, and in 1995 a solar panel with this design was unfolded on the Space Flyer Unit, a Japanese satellite. Despite this test, the technology is still in its early stages. But now, with an emphasis on small satellites and large structures, Trease says arrays inspired by this fold could see renewed usefulness.

"The fact that we're going both bigger and smaller may open up domains where it may be relevant again," Trease said.

The fold that Trease and colleagues used is not a Miura fold, but rather a combination of different folds. Trease's prototype looks like a blooming flower that expands into a large flat circular surface.

Trease envisions that foldable solar arrays could be used in conjunction with small satellites called CubeSats. And he says the origami concept could be used in antennas as well. It could be especially appropriate for spacecraft applications where it's beneficial to deploy an object radially -- that is, from the center, outward in all directions.

Origami was originally intended for folding paper, which has almost no thickness, so Trease and colleagues had to be creative when working with the bulkier materials needed for solar panels.

"You have to rethink a lot of that design in order to accommodate the thickness that starts to accumulate with each bend," he said.

Origami has been the subject of serious mathematical analysis only within the last 40 years, Trease said. There is growing interest in integrating the concepts of origami with modern technologies.

"You think of it as ancient art, but people are still inventing new things, enabled by mathematical tools," Trease said.

A short video clip of the origami-inspired prototype is online at: