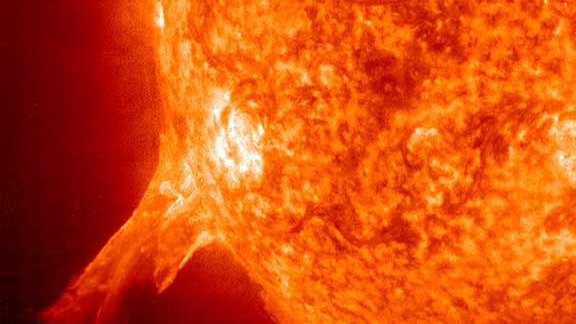 Unexpected fluctuations in the amount of solar energy that reaches Earth have been detected by NASA satellite, revealing that the sun is more variable than previously believed.

Unexpected fluctuations in the amount of solar energy that reaches Earth have been detected by NASA satellite, revealing that the sun is more variable than previously believed.

Detection of even the slightest long-term change in the sun's emission of energy is important for predictions of cooling or heating trends in Earth's climate.

The newly measured changes in the sun's output of energy may be related to sunspot or solar flare activity, according to meteorologist and physicist Dr. Richard C. Willson of the Jet Propulsion Laboratory, Pasadena, Calif., who developed an instrument to measure the sun's radiance for the Solar Maximum Mission observatory satellite.

The instrument, called an Active Cavity Radiometer Irradiance Monitor (ACRIM), one of seven experiments on the satellite, is capable of detecting changes in the sun's release of energy as small as one/one-thousandth percent. The ACRIM measures the optical portion (from far-ultraviolet to far-infrared radiation) of the radiation that falls on top of Earth's upper atmosphere.

An increase or decrease in the sun's release of energy -- as little as 0.5 percent per century -- can produce vast changes in the Earth's climate. It is estimated that drop of just one percent in the sun's output of radiation would decrease Earth's mean global temperature by more than 1 Kelvin (2 degrees Fahrenheit). The entire Earth would be covered with ice if the sun's radiation decreased by only 6 percent.

One hundred fifty million years ago, Earth was approximately 15 degrees Fahrenheit warmer than it is today. Since then, numerous warming and cooling climatic cycles have occurred. These cycles, which occur with frequencies ranging from 22 years to millions of years, have caused ice ages, ranging in severity from major glacial epochs to "little ice ages."

The last "little ice age," which began in the mid 17th century and lasted through the mid-19th century, was marked by one-and-a-half degree drop from the present mean global temperature of about 58 degrees Fahrenheit. This slight change in the Earth's average temperature resulted in an observable increase of glaciation in the Alps.

The Solar Maximum Mission satellite, launched into 310-mile orbit above Earth last Feb. 14, is managed for NASA's Office of Space Science and the Office of Space and Technology Applications by the Goddard Space Flight Center, Greenbelt, Md.

The spacecraft's observations are part of NASA's solar monitoring program, now focused on studying the sun during the Solar Maximum Year -- 19-month period when sunspot activity, which rises and falls in an 11-year cycle, is at peak.