Pre-flight preparation of tissue chips for the Immunosenescence investigation, which studies the effects of microgravity on immune function to determine the mechanisms behind immune system aging. It’s one of several research and technology demonstrations launching to the space station in June 2022.

EMIT, a mission developed at JPL to measure the composition of minerals that become airborne dust, is among the investigations launching to the space station next month.

The 25th SpaceX cargo resupply services mission (SpaceX CRS-25) carrying scientific research and technology demonstrations to the International Space Station is scheduled for launch June 9 from NASA’s Kennedy Space Center in Florida. Experiments aboard the Dragon capsule include studies of the immune system, wound healing, soil communities, and cell-free biomarkers, along with mapping the composition of Earth’s dust and testing an alternative to concrete.

Download high-resolution photos and videos of the research mentioned in this article.

Here are more details on some of the research launching to the space station:

The Earth Surface Mineral Dust Source Investigation (EMIT), developed by NASA’s Jet Propulsion Laboratory in California, employs NASA imaging spectroscopy technology to measure the mineral composition of dust in Earth’s arid regions. Mineral dust blown into the air can travel significant distances and have impact Earth’s climate, weather, vegetation, and more. For example, dust containing dark minerals that absorb sunlight can warm an area, while light-colored mineral dust can cool it. Blowing dust also affects air quality, surface conditions such as rate of snow melt, and phytoplankton health in the ocean. The investigation collects images for one year to generate maps of the mineral composition in the regions on Earth that produce dust. Such mapping could advance our understanding of the effects of mineral dust on human populations now and in the future. 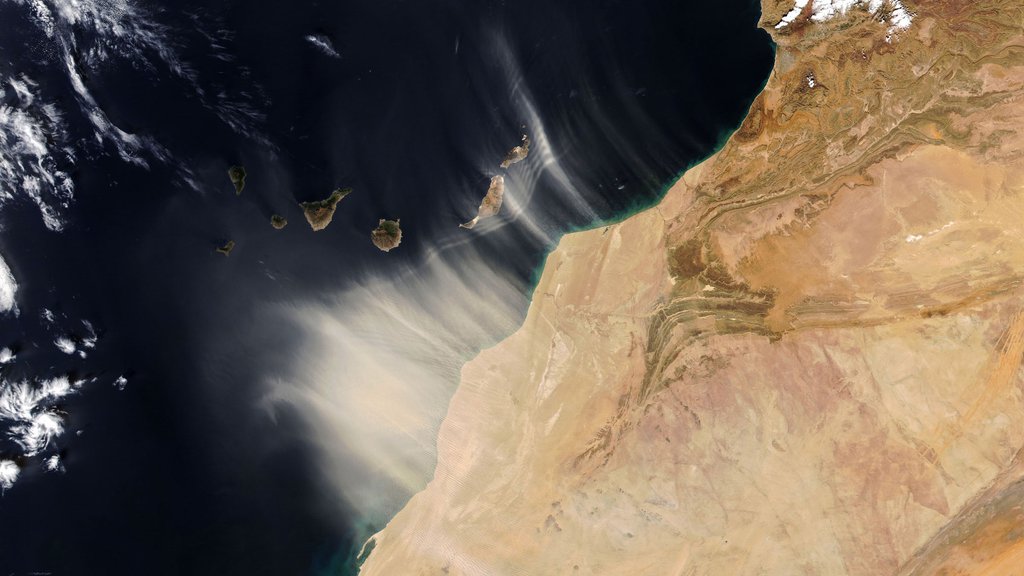 Dust from northwest Africa blows over the Canary Islands in this image captured by the NOAA-20 satellite on Jan. 14. An upcoming NASA mission, the Earth Surface Mineral Dust Source Investigation (EMIT), will help scientists better understand the role of airborne dust in heating and cooling the atmosphere.

Aging is associated with changes in the immune response known as immunosenescence. Microgravity causes changes in human immune cells that resemble this condition but happen faster than the actual process of aging on Earth. The Immunosenescence investigation, sponsored by ISS National Lab, uses tissue chips to study how microgravity affects immune function during flight and whether immune cells recover post-flight. Tissue chips are small devices that contain human cells in a 3D structure, allowing scientists to test how those cells respond to stresses, drugs, and genetic changes.

Sew Me Up, Scotty

As we travel farther from Earth, humans need to be prepared to deal with medical emergencies, including wounds, without hospitals and other medical support. Wound healing is a complex process, and scientists are not sure why wounds often heal imperfectly or create scars. Suture In Space, an investigation from ESA (European Space Agency), examines the behavior of sutures and wound healing in microgravity. A better understanding of the role of mechanical forces (such as tension, stretching, and compression) in the healing of sutured wounds could help determine requirements for suturing materials and techniques suitable for future space missions to the Moon and Mars.

During preparation for the investigation, researchers developed a new technique for improving and extending the survival of tissue cultures. For future space travel, this invention could promote wound healing and regeneration processes, improving response to emergencies. On Earth, the technique could aid laboratory studies on transplants, cell regeneration, and surgical techniques and improve the ability to preserve tissues for use in emergency situations, such as for burn and vascular surgeries and tissue and organ transplants. Better preservation of manufactured tissues also could contribute to improvements in 3D bioprinting of tissues and organs.

On Earth, complex communities of microorganisms carry out key functions in soil, including cycling of carbon and other nutrients and supporting plant growth. DynaMoS examines how microgravity affects metabolic interactions in communities of soil microbes. This research focuses on microbe communities that decompose chitin, a natural carbon polymer on Earth.

“Soil microorganisms carry out beneficial functions that are essential for life on our planet,” says principal investigator Janet K. Jansson, chief scientist and laboratory fellow at Pacific Northwest National Laboratory. “To harness these beneficial activities for future space missions, we need to understand more about how conditions in space, like microgravity and radiation, influence these microbes and the beneficial functions that they provide. Perhaps in the future, we will use beneficial soil microbes to enhance growth of crops on the lunar surface.”

Improved understanding of the function of soil microorganism communities also could reveal ways to optimize these communities to support agricultural production on Earth.

Cell-free technology is a platform for producing protein without specialized equipment of living cells that need to be cultured. Genes in Space-9, sponsored by the ISS National Lab, demonstrates cell-free production of protein in microgravity and evaluates two cell-free biosensors that can detect specific target molecules. This technology could provide a simple, portable, and low-cost tool for medical diagnostics, on-demand production of medicine and vaccines, and environmental monitoring on future space missions.

“Biosensors are a class of synthetic biology tools with immense potential for spaceflight applications in contaminant detection, environmental monitoring, and point-of-care diagnostics,” said Selin Kocalar, student winner of Genes in Space 2021. “This investigation seeks to validate their use aboard the space station. If it is successful, Genes in Space-9 will lay the foundation for downstream applications of biosensors for space exploration and resource-limited settings on Earth.”

Genes in Space, an annual research competition, challenges students in grades 7 through 12 to design DNA experiments to be conducted on the space station. The program has launched eight investigations so far, and some have resulted in publications furthering our knowledge on genetics experiments through space-based research, including the first experiment to use CRISPR technology in microgravity in 2019.

Biopolymer Research for In-Situ Capabilities looks at how microgravity affects the process of creating a concrete alternative made with an organic material and on-site materials such as lunar or Martian dust, known as a biopolymer soil composite (BPC). Using resources available where construction takes place makes it possible to increase the mass of the construction material and, therefore, the amount of shielding.

“Astronauts on the Moon and Mars will need habitats that provide radiation shielding, but transporting large amounts of conventional construction materials from Earth is logistically and financially infeasible,” said team member Laywood Fayne. “Our student team, led by Michael Lepech from the Blume Earthquake Engineering Center at Stanford University, is studying a way to convert regolith in these environments into a concrete-like material by mixing in water and a protein known as bovine serum albumin.”

This material hardens as the water evaporates, a process affected by gravity, explains team co-lead James Wall. “Our project consists of making six bricks in microgravity to compare to bricks made on Earth at 1 g and less than 1 g,” Wall says. “We will investigate the number and orientations of protein bridges, compressive strength, and porosity. Our conclusions could help determine how these bricks might form on the Moon and Mars.”

BPCs also could offer an environmentally friendly concrete alternative for making structures on Earth. In 2018, concrete production represented 8% of global carbon emissions. BPC material has zero carbon emissions and can be made from local, readily available resources, which also simplifies supply chains. This experiment is a part of NASA’s Student Payload Opportunity with Citizen Science (SPOCS) program, which provides students enrolled in institutions of higher learning the opportunity to design and build an experiment to fly to and return from the International Space Station.