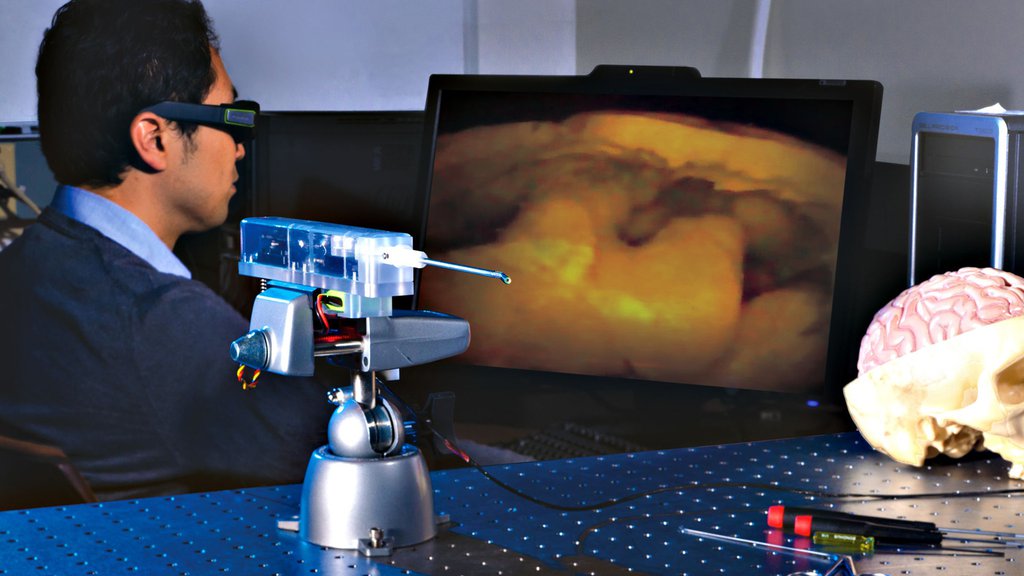 A laboratory prototype of MARVEL, one of the world's smallest 3-D cameras. MARVEL is in the center foreground. On the display is a 3-D image of the interior of a walnut, taken by MARVEL previously, which has characteristics similar to that of a brain.
Credit: NASA/JPL-Caltech/Skull Base Institute

A tiny 3-D camera for potential use in brain surgery, has been honored with a technology award.

To operate on the brain, doctors need to see fine details on a small scale. A tiny camera that could produce 3-D images from inside the brain would help surgeons see more intricacies of the tissue they are handling and lead to faster, safer procedures.

An endoscope with such a camera is being developed at NASA's Jet Propulsion Laboratory in Pasadena, California. MARVEL, which stands for Multi Angle Rear Viewing Endoscopic tooL, has been honored this week with the Outstanding Technology Development award from the Federal Laboratory Consortium. An endoscope is a device that examines the interior of a body part.

"With one of the world's smallest 3-D cameras, MARVEL is designed for minimally invasive brain surgery," said Harish Manohara, principal investigator of the project at JPL. Manohara is working in collaboration with surgeon Dr. Hrayr Shahinian at the Skull Base Institute in Los Angeles, who approached JPL to create this technology.

MARVEL's camera is a mere 0.2 inch (4 millimeters) in diameter and about 0.6 inch (15 millimeters) long. It is attached to a bendable "neck" that can sweep left or right, looking around corners with up to a 120-degree arc. This allows for a highly maneuverable endoscope.

Operations with the small camera would not require the traditional open craniotomy, a procedure in which surgeons take out large parts of the skull. Craniotomies result in higher costs and longer stays in hospitals than surgery using an endoscope.

Stereo imaging endoscopes that employ traditional dual-camera systems are already in use for minimally invasive surgeries elsewhere in the body. But surgery on the brain requires even more miniaturization. That's why, instead of two, MARVEL has only one camera lens.

To generate 3-D images, MARVEL's camera has two apertures -- akin to the pupil of the eye -- each with its own color filter. Each filter transmits distinct wavelengths of red, green and blue light, while blocking the bands to which the other filter is sensitive. The system includes a light source that produces all six colors of light to which the filters are attuned. Images from each of the two sets are then merged to create the 3-D effect.

Now that researchers have demonstrated a laboratory prototype, the next step is a clinical prototype that meets the requirements of the U.S. Food and Drug Administration. The researchers will refine the engineering of the tool to make it suitable for use in real-world medical settings.

In the future, the MARVEL camera technology could also have applications for space exploration. A miniature camera such as this could be put on small robots that explore other worlds, delivering intricate 3-D views of geological features of interest.

"You can implement a zoom function and get close-up images showing the surface roughness of rock and other microscopic details," Manohara said.

"As a skull base surgeon with a specific vision of endoscopic brain surgery, it has been a privilege and a great personal honor working with the JPL team over the past eight years to realize this project," Shahinian said.

MARVEL is being developed at JPL for the Skull Base Institute, which has licensed the technology from the California Institute of Technology. JPL is managed for NASA by Caltech.